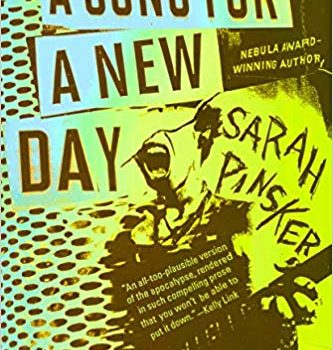 Readers of Sarah Pinsker’s Nebula Award-winning novelette “Our Lady of the Open Road” (included in her collection Sooner or Later Everything Falls into the Sea, reviewed here in March) might be as curious as I was to learn more about the gritty near-future America of that story, and in particular of the plight of live musicians in a world in which virtual holographic concerts have all but replaced live performances. Dystopia, as we all know by now, rewards the skills of gam­ing, hacking, hiding, and archery, but relatively little attention seems to be paid to the future of artistic performance – this despite the fact that the performing arts have already been drastically reshaped by Snapchat, iTunes (or Apple Music), Spotify, YouTube, MusicBee, and whatever new platform has emerged while I’ve been typing this. Pinsker’s first novel, A Song for a New Day, recognizes this and expands upon the world of that story in a way that reads like an intriguing combination of road novel, apocalyptic near-future SF, and – most importantly – character study that explores the compromises faced both by those who see the value in corporatized entertainment (more people get to enjoy it) and those who want to preserve the spontaneity and energy of live performances. In Pinsker’s future, stadium bombings, terrorist attacks, and new viruses have made it dangerous and even illegal for audiences of any size to gather for live performances, and yet the company that has stepped in to fill the gap, with the self-explanatory name StageHolo, has an unfortunate habit of breaking up bands and commodifying and homogenizing the music that it features.

The tensions between corporate ambition, government repression, and artistic freedom hardly amount to a new theme, of course, but Pinsker makes the issues seem more urgent and more familiar than usual. This is partly because of her wide-ranging and finely textured portrait of a diminished America – we get to see a fair amount of geography – and partly it’s due to her remarkable skill at describing the nuances of mu­sical performance. The novel’s greatest strengths derive from its two main point-of-view characters: Luce, a talented performer and songwriter who was on the verge of national success just when live performance became proscribed, and Rosemary, who works from home essentially as a help desk operator (called Vendor Services) for a retail megacorporation called SuperWally (the echo is no doubt deliberate), which constantly and cheer­fully reminds its employees that “You are valued but replaceable.” In a sense, it’s that tension between what is valued and what is replaceable that drives much of the novel, embodied mainly in the remote-experience technology of StageHolo, Pinsker’s most significant SF invention (along with the “hoodies” that permit remote viewing and performing, and highways full of self-driving vehicles), even though it’s a rather familiar one by SF standards; writers were worrying about the survival of live musical performances as far back as Robida and Verne (who were concerned mostly about sound recordings and television), and the idea that technology would eventually isolate us in our cubicles, terrified of interpersonal contact, was Forster’s hobbyhorse in “The Machine Stops” way back in 1909. The technological extrapolation of Pinsker’s SF may be restrained (and thus all the more credible), but the novel does converse with a number of earlier traditions. As Luce notes at one point, “Any note can be played over any chord and any chord can be played over any note.”

None of this diminishes Pinsker’s most im­pressive accomplishment, which is the parallel and contrasting tales of Luce, whose embittered idealism leads her to drive away those closest to her, but who is so determined to perform that she stages secret concerts in home basements and after-hours venues, and Rosemary, young and terrified of crowds, whose desire for something meaningful in her life leads her to give up her deadly job at SuperWally and become a kind of talent scout for StageHolo, not realizing until too late how ruthless that corporation can be as well. Inevitably, they will cross paths, but Pinsker never lets the novel turn into an easy parable of mutual redemption, and at a crucial point Rosemary’s naivete nearly creates a disaster for Luce. If Luce finally emerges as the more complex, dam­aged, and deeply conflicted character, it’s largely because we see those conflicts from inside her first-person narration, while Rosemary – whose chapters are third-person – at times seems a distant descendant of Sister Carrie or Jo March, learning to cope with a world she never quite suspected existed, and to understand the differ­ence between what is replaceable and what isn’t. Luce and Rosemary, not to mention an intriguing cast of secondary players, are figures that will stay with us for a long time. 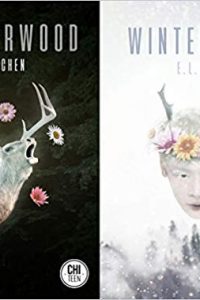