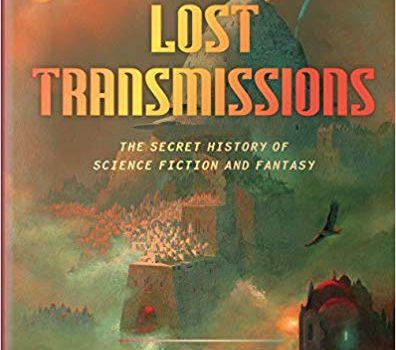 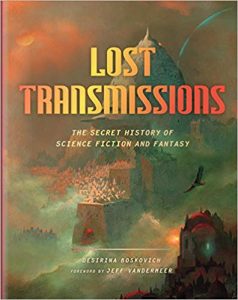 Desirina Boskovich, who with Jeff VanderMeer previously authored the informative and visually sumptuous The Steampunk User’s Manual (2014), here brings us a delightful potpourri of 80 essays and interviews on all manner of things imaginary, with dazzling complementary illustra­tions. The book’s subtitle, “The Secret History of Science Fiction and Fantasy”, is helpfully clarified by both VanderMeer’s Foreword and Boskovich’s Introduction. Both underscore that this volume makes no pretense to definitiveness. VanderMeer’s remarks allude several times to the idea of eccentricity (“The joy of a compilation like Lost Transmissions is that it is itself a kind of secret eccentricity”; “Some readers may even curse and say, ‘What about X, Y, and Z?,’ for that is the joy of cultivating eccentric tastes”). VanderMeer describes it rather as a “jumping-off point” for each reader’s personalized investigation of genre history. Boskovich expounds further on the book’s ambit: “We explore stories and projects in all genres that never saw the light of day, but if only they had – they might have changed the course of SFF storytelling forever. We tease out the hidden connections and subtle forces that pushed creators in one direction instead of another. We uncover the work of artists who, for whatever reason, did not receive their due.” Echoing VanderMeer’s observations, she goes on to write that “this is not the secret history, but a secret history.”

The book’s contents are organized in seven sec­tions, covering Literature, Film and Television, Architecture, Art and Design, Music, Fashion, and Fandom and Pop Culture. This is obviously an ambitious scope, made more enjoyable by those prefatory reminders of contingency, and further elevated by the volume’s intentional engagement with counterfactuality and a desire for corrective reconsiderations. Another strength is the inclusion of other voices. As with The Steampunk User’s Manual and recent non-fiction books, such as The Astounding Illustrated History of Science Fiction (2017) and Aliens in Popular Culture (2019), we benefit from the perspective of other contributors, who in this instance pen 32 of the 80 pieces. Finally, four in-depth interviews conducted by Boskovich allow notable figures with a gratifying range of perspectives – John Shirley, Thomas Olde Heuvelt, Karen Joy Fowler, and Hugh Howey – to speak to us directly. Illustrators Ashanti Fortson, Jordan Grimmer, Olivia Rose, and Jeremy Zerfoss round out the volume’s numerous photographs and cover reproductions with mesmerizing original artwork.

Boskovich is to be commended for her editorial selection and for doing the heavy lifting of writ­ing 44 well-researched essays on a wide variety of thoughtfully curated subjects and figures. Perhaps unsurprisingly, the book is frontloaded with its heftiest sections, on literature and film, and there are tons of delectable morsels here. Boskovich leverages quotes from experts such as Rob Latham, John Clute, Ted Gioia, Lisa Tuttle, and other subject-specific biographers, critics, and scholars, to add insights and perspective. Her net has been cast far and wide, mak­ing references from genre-specific venues like Tor. com as likely as those from mainstream publications like The New York Times, but her culling is always in evidence. Even when she covers well-trodden ground, such as Harlan Ellison or Philip K. Dick, she makes the material fresh and enticing. I also appreciate the occasional deft note of humor, e.g. “balneological (a word that refers to the study of therapeutic bathing, and should really be used more often).”

In terms of overall balance, I found some of the pieces on film – for instance, the synopsis of William Gibson’s Alien III treatment – overlong. By contrast, the discussions of artists, including key figures such as Virgil Finlay or Michael Whelan, are lamentably short, even by comparison with pieces on non-literary SF renderings such as music and fashion. Assassin’s Creed and BioForge receive good treatments, but there’s ample opportunity for more coverage of video games, an increasingly significant player (apologies) in our storytelling landscape. I wish the “Specula­tive Music of the New Millennium” overview had included at least a mention of Marilyn Manson’s germane Mechanical Animals (1998), which would have provided natural continuity with the preced­ing commentary on David Bowie’s Ziggy Stardust, though at least Manson is name-checked in “David Bowie’s Queer Glam Futuristic Fashion”. I would have also enjoyed a piece on our genre’s somewhat eccentric, to use VanderMeer’s term, infatuation with awards – how many casual readers will know, for instance, what a Chesley is?

Other contributors are also consistently interesting. Personal highlights include Charlie Jane Anders wax­ing enthusiastic about Space Island One, Matthew Kressel’s précis on Syd Mead, Genevieve Valentine’s take on the “savage beauty” of Alexander McQueen’s fashion statements, Frank Romero’s exploration of lesser-known RPGs, and Jesse Bullington’s discus­sion of Kentaro Miura’s grimdark body of work. Darran Anderson’s “The Salvage Yard: Real-Life Experiences Revisited in Science Fiction” was the only misfire for this reader, striking me as somehow simultaneously esoteric and mundane. A question of consistency: why do some contributors receive an introductory bio (e.g. Neil Gaiman, William Gibson) while others don’t? Thankfully, this book’s proofreading and fact-checking appear to have been more thorough than the going rate; I only detected one minor error (a cited essay on Madeleine L’Engle is misattributed to the Los Angeles Times, rather than the Los Angeles Review of Books).

I love this enterprise’s entreaty to reassess histori­cally neglected works, for example those by David R. Bunch or D.G. Compton, and its spotlight on aborted projects, such as Clair Noto’s unrealized screenplay for “The Tourist”, that might yet, perhaps because of Lost Transmissions, come to fruition.

As a somewhat facile yet telling litmus test of this book’s admirably crisp, tessellated perspective on genre history, consider that none of the four titular figures – John W. Campbell, Isaac Asimov, Robert A. Heinlein, and L. Ron Hubbard – autopsied by Alec Nevala-Lee’s recent Hugo-finalist Astounding are listed in this book’s index. That’s as it should be. It’s a measure of this volume’s success in its desire to revitalize our historical compost. After all, we already have dozens of works on the aforementioned figures and their canon-entrenched brethren. More revealing than those absences are the inclusions: this Index boasts entries on Angela Carter, Henry Dumas, John M. Harrison, Leena Krohn, Tanith Lee, Jane Loudon, China Miéville, Mervyn Peake, and many others. “Our history is always evolving,” notes Boskovich. Let us applaud Lost Transmissions‘ numerous findings and amplifications, and aspire, like the raw material of Darwin’s magnificent theory, to be ever-adaptable to history’s changes. 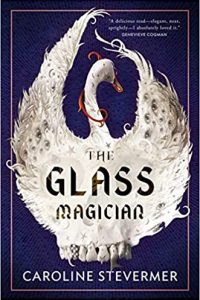 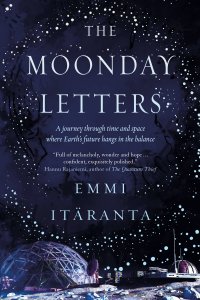