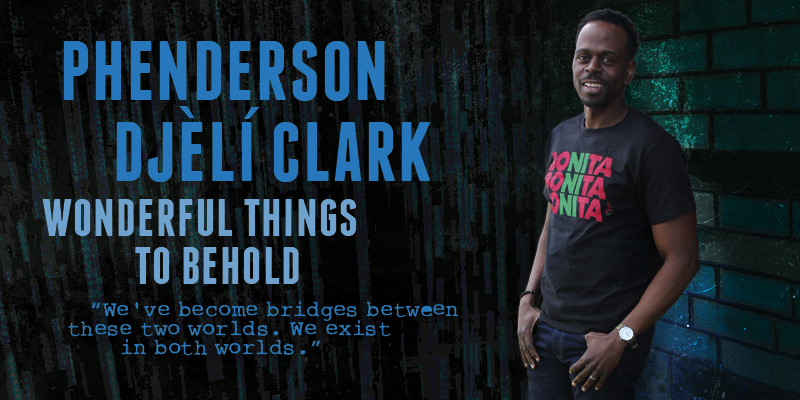 Phenderson Djèlí Clark is the pen name of Dexter Gabriel, born June 11, 1971 in Queens NY to immigrant parents from Trinidad and Tobago. His family sent him to live in Trinidad with his grand­parents when he was a baby, and he returned to the US when he was eight. He lived in Staten Island and Brooklyn until moving to Houston TX when he was 12. He got his BA and MA in history from Southwest Texas State (now Texas State University-San Marcos), and his Ph.D. in history from Stony Brook University-New York in 2016. He teaches at the University of Connecticut.

Clark began publishing short stories in the small press in 2011 (vari­ously as P. Djèlí Clark, Djèlí A. Clark, and Phenderson Djèlí Clark). His first major sale was “A Dead Djinn in Cairo” to Tor.com in 2016. His novella The Haunting of Tram Car 015 (2019) is set in the same alternate magical steampunk historical milieu, and a novel in the same universe is forthcoming.

“W.E.B. Du Bois, the great sociologist and activist, used the term ‘double consciousness’ to describe this twoness, that one is forever (he said) Negro and American. If you add in the Black immigrant experience, where you become a part of this much larger Black American experi­ence, that pulls you in. You become part of that history and culture and everything – even as you add to it, it adds this other layer to the conscious­ness. Of course, all my friends were American, for the most part, in the south; I’d go home and my mom and dad still speak in their Trinidadian patois, and the culture they have is still a bit of Trinidadian, especially my mother, but it’s also American at the same time. Our household was always this bridge of the two.

“I’m an academic historian, and because I’m going to be publishing books and journal articles as Dexter Gabriel, I wanted a separate name for speculative fiction. I finally came up with this one after several tries. Phenderson was my grandfather’s name, and we were really close. No one has those old British colonial names anymore – you don’t meet too many Phendersons. My middle name I took from Djèlí, the West African storyteller. Clark was my mother’s maiden name, and so there we have it: Phenderson Djèlí Clark. It has a ring to it. I have to remember when people say ‘Phenderson’ – ‘Who are you talking to? Oh.’

“I’ve always had interest in speculative fiction. Once I came to the United States my mother especially would take me to the library and let me read as much as I wanted. I started reading C.S. Lewis books, not understanding any of the religious implications. I read the entire Narnia series, then went back to the library and looked around for more C.S. Lewis. I found a book that was like a compendium of Catholic thought. I don’t want that to happen to anyone who reads me. ‘I read a book by Dexter Gabriel, it was this interesting science fiction story, I’ll see what else he has – a history of 19th-century slave auctions?’ I don’t want to get that kind of confusion.

“When I write creatively, it’s different than writing academically. For one, I don’t have footnotes. I used to write fiction a lot when I was in grad school, and one of the ways it would help was that when I was finished doing my dissertation writing, I would take a break. My idea of taking a break sometimes would be to do creative writing. When I was in grad school, I had more time simply to write. I had my set time to write aca­demic work, which was mostly during the day, sometimes a little into the evening. Weekends and nighttime, like after 9 o’clock, was for my creative work. In the summers, I would give my creative work a lot more time, but still do academic stuff. I wrote my novella The Haunting of Tram Car 015 in the summer of 2017 while I was in London doing research for academic work. During the day, I was in there with the archives, trying to read 19th-century script, taking tons of pictures, sorting everything, and when I came home at night, I would do creative writing. That was my writing plan – but recently I had twin daughters. I don’t know what the plan is now. That nice, neat plan is completely gone, and I’m trying to figure things out.

“My earliest formative years were spent in Trinidad, where I grew up in this mix of various cultures. A large segment of the population are descendants of the various peoples who were enslaved in the Caribbean, who have migrated to the island. Trinidad is its own type of New York, where nearly everyone of African descent there today is actually from somewhere else. Even in my own family, on one side it’s Grenada, and two generations down it’s Barbados, but they all came to Trinidad be­cause Trinidad was a less-populated British island. People would come from Martinique and elsewhere, especially after slavery, so it became this melting pot of different Afro-Caribbean cultures. I grew up in the middle of that. The other large population came from India. When slavery ended, the British couldn’t get a lot of the former slave people to work for them, so they brought in all these indentured servants – partly from China, but mostly from India. I grew up in a culture where I heard a lot of Afro-Caribbean folklore, alongside Hindu religions and every­thing else, stories of Hanuman and Sita, and all this became part of my cultural mix. It influenced my imagination in many ways. When I left Trinidad, I was already interested in this stuff. I’d grown up with stories of the soucouyant, which are like vampires that might take your breath away at night if you don’t lock your doors. I grew up in that mix of cultures, as well as watching Hindi TV – even if I didn’t understand, I could watch these wonderful stories of gods in battle.

“All this stuff became part of my cultural niche. Coming to the United States helped me get access to more of it. In Trinidad we had BBC, one channel. The first night I came to the US, my father sat down with me to watch a Godzilla movie. I’d never seen a Godzilla movie. He loved old cartoons and old Peter Cushing and Vincent Price movies. My mother was a huge Twilight Zone fan, and she watched old Star Trek, so be­tween my parents, I got introduced to all of this speculative fiction.

“As a kid, you kind of meld it all together. My grandmother warning me about children with backwards feet who might follow me into the house was about as fantastic and interesting as me watching Space: 1999. Reality and fantasy were much more fluid. It wasn’t like, ‘One is non­sense and one is not.’ When I came to the United States, that oral tradition was lost, and I filled the gap with America’s version of storytelling and folklore. When I got older, I started parsing how people look down on oral traditions as nonsense. The difference between science fiction, fantasy, and folklore didn’t become clear to me until I was much older. As a younger person, it was simply all fantastic, wonderful things to behold.

“People have asked me when I started writing – there’s when I started writing, and when I started writing seriously. I’ve been writing since I was a kid. From the time I could write, I was writing little stories. Sometimes they were just stories based on stuff I’d seen. I was also a minor artist, so I was always trying to sketch things from my imagination. By the time I hit middle school, I was trying to create little comic books. In high school I started writing more seriously, but even then I never thought of publishing it. Part of it is just that I did not grow up with a lot of Black sci­ence fiction writers, and so subconsciously, I never thought, ‘I could become a science fiction writer.’ Why not just say you could become a superhero? It was that farfetched, in a sense.

“Often my writings tended to reflect whatever my cultural niche of the time was, as well as whatever I had been reading or watching. In the beginning, when I would write characters, I would write white characters. It would bother me, so I would try to imagine them as Black, but somehow I couldn’t exactly make them how I wanted them to be. That would frustrate me, and I’d say, ‘I’m making them Black characters, period, and that’s it.’ I would just make them Black characters for the most part, but there wouldn’t be anything different about them. They were just Black characters doing the same thing white characters would do. There was nothing culturally different or anything. I don’t think it was until college, when you start to find your identity and everything, that I thought, ‘Wait a minute, I have all of these rich traditions that I come from and understand that I can put in the story. Why can’t this be in the story? Why does it have to be the stuff I’ve already read? Why does the fantasy all have to be western Europe-type dragons and elves? Not every story has to start with a bunch of dwarves and elves meeting in a tavern. There can be other things.’ I want to make elves Black, and that’s fine – I love when people do that kind of thing – but I also knew I didn’t have to. I could do other things. When that eureka moment came, I suddenly knew, ‘I can pull from entirely different traditions, different perspectives, and different paradigms. I can do this.'”

Read the full interview in the October 2019 issue of Locus.