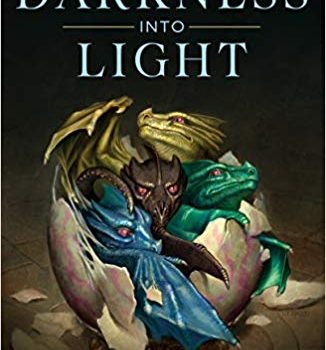 Marie Brennan, Turning Darkness Into Light (Tor 8/19) Brennan returns to the world of her popular Memoirs of Lady Trent series for this new novel following that lady’s granddaughter, an archaeologist investing an ancient Draconean civi­lization, and uncovering a dangerous conspiracy.

Kira Jane Buxton, Hollow Kingdom (Grand Cen­tral 8/19) A perplexed domesticated crow seeks to stop a plague turning humans into zombies – and save his junk-food addiction – in this decidedly different tale of zombie apocalypse. A hilarious first novel with a most memorable hero.

Richard Chizmar, The Long Way Home (Cem­etery Dance 8/19) Noted author and respected horror editor Chizmar offers this collection of 17 stories (one new), a mix of horror, mystery, and more, plus two essays and a previously published short script, all with autobiographical notes on the writing of each. Originally published in the UK by PS Publishing in 2018.

Rob Hart, The Warehouse (Crown 8/19) Hart takes a sharp-edged, satirical – and terrifyingly believable – look at where current trends could lead in this near-future thriller of a giant high-tech company that forces its employees to live in the same complex where they work in giant warehouses and depersonalizing open-plan offices.

Charlie N. Holmberg, Myths & Mortals (47North 4/19) Chaos builds (of course) in this second book in the entertaining Numina series, set in a world with a rich mythology and hints of a fascinating ancient culture, where a man bent on world domina­tion plans to summon a monster that could destroy the world, and a young woman still learning to trust herself is determined to stop him, even if her allies have betrayed or abandoned her.

T. Kingfisher, Minor Mage (Argyll Productions 7/19) Kingfisher (AKA Ursula Vernon) brings her trademark quirky humor to this delightful (if occasionally dark) young-adult novella about a 12-year-old mage in over his head with only three spells, an armadillo for a familiar, and a village depending on him to save them.

R.F. Kuang, The Dragon Republic (Harper Voy­ager US 8/19) The Asian-inspired epic fantasy begun in the acclaimed novel The Poppy War continues in this second volume, which sees the shaman warrior Rin still trying to save her country, even as she struggles with her guilt over the war, her opium addiction, and the dark commands of the god whose power she wields.

Sam J. Miller, Destroy All Monsters (HarperTeen 7/19) Questions of sanity, memory, and mystery mingle in this fascinating young-adult novel of a young man who retreats into a fantasy world as a way of dealing with an accident neither he nor his best friend can really remember, while his friend turns to photography, producing images with strange shapes and shadows. “Miller has a keen eye for the harsh realities that these kids have to live with, and he makes the kids themselves re­wardingly complex, conflicted, and utterly real.” [Gary K. Wolfe]

Cadwell Turnbull, The Lesson (Blackstone 6/19) Seemingly benevolent alien researchers take over a small community on St. Thomas in the US Vir­gin Islands, but their violent reprisals against any human confrontation cause unrest. First novelist Turnbull paints a vivid picture of the island’s past and present, tackling the old idea of alien invasion as metaphor for colonization with “a bold new voice that applies a fresh coat of paint to an old idea and does so with a sense of daring, compassion, and intelligence.” [Ian Mond]

From the October 2019 issue of Locus.

On winning the Oscar Award for best original screenplay, Jordan Peele admitted that he started his winning script for the film Get Out at least 20 times. Why 20? Because he just didn’t feel he could get the script to work, no matter how many times he tackled it. Author N.K. Jemisin relates a similar struggle in the writing of her masterful novel, The Fifth Season. In her acceptance speech