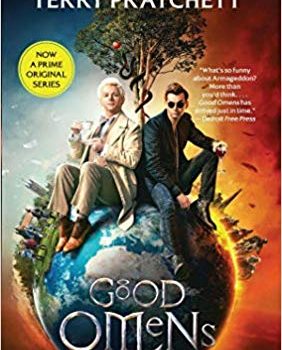 Fall; or, Dodge in Hell by Neal Stephenson maintained its dominance of the hardcover list with a substantial lead over our second place finisher, Chuck Wendig’s new stand-alone novel Wanderers. The new runner-up was River of Night by John Ringo & Mike Massa (Baen), the seventh book in the Black Tide Rising series. We had 45 nominated titles, down from 47 last month.

On our paperback list, it’s déjà vu all over again with Good Omens by Neil Gaiman & Terry Pratchett holding onto first place in an easy victory over Salvation by Peter F. Hamilton (the first book in the Salvation Sequence), which came in second. Alex Stewart’s A Fistful of Elven Gold (Baen) was our new runner-up. There were 50 titles nominated, down from last month’s 54.

In a two-fer, Good Omens also nabbed the top spot on the trade paperback list, barely edging out Cixin Liu’s The Three-Body Problem in second. The race for the top of the trade paperback list was extremely tight, with only five votes separating our first- and third-place finishers. Blood of Elves by Andrzej Sapkowski (Orbit US), the first book in the Witcher series, was our new runner-up. We had 76 titles nominated, up from 69 last month.

From the October 2019 issue of Locus.

A vagabond, a pit-fighter, a noblewoman, and a dung-collector stand in a crowded square to witness the execution of a dissident madman. Though strangers before that overcast day, the condemned man’s final ravings upon the scaffold will bind them inextricably. Marked to deliver his body safely to a doom-cult, the four hapless individuals discover that failure risks their sanity. And their souls. That was the story hook for a roleplaying