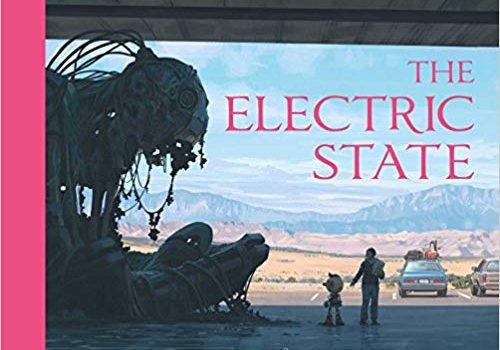 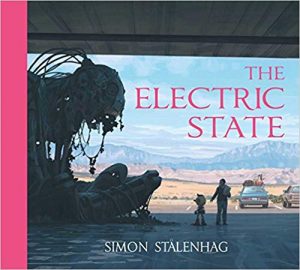 The Electric State is a fascinating work, an il­lustrated novel in which the art carries the burden of the narrative. The tale is one of an alternative reality in the recent past in the western US where the accelerated development of AI and VR in the wake of a civil war has led to the downfall of American human society.

The country has been made desolate by the development of a virtual reality device so ad­dictive that almost everyone in the country has hooked up to it and many have died as a result of that addiction, neglecting to care for children, eat, or even breathe when in the grip of the VR. Others have gathered into silent, eerie post-human agglomerations in thrall to the hive mind that the VR provides.

The protagonist, a lone young woman traveling with a droid/robot, a gun, and her memories goes to the West Coast on a rescue mission. As she moves, evading trackers and the strange dangers of the altered landscape, the reader is treated to startling, powerful cinematic images of a post-apocalyptic US.

Stålenhag’s cinematic paintings don’t require much explanatory text. The reader can fill in the blanks. The spare text alternates between an expositional travelogue that reveals what has happened to the US and the personal tale of the young woman’s quest.

Stälenhag has made a specialty of dystopia, painting acclaimed, crowd-funded tales of post-apocalyptic alternative Earth societies (Tales from the Loop in 2015, Things from the Flood in 2016). Tales from the Loop was ranked one of the “10 Best Dystopias” by the Guardian. The Electric State is his first story set in an alternative American past.

Stälenhag’s work is informed by landscape art, including Swedish artists Gunnar Brusewitz and Lars Johnsson, and by American artists Edward Hopper and Andrew Wyeth, as well as the cin­ematic designs of Syd Mead and Ralph McQuar­rie. There are also stylistic nods to Blade Runner, Alien, The X-Files, and Invasion of the Body Snatchers. In preparation for this book, the artist drove the route his characters follow through the US Southwest and West, but you don’t need any of this information to enjoy this book.

Handsomely produced and printed on thick matte paper, The Electric State is a chilling, unforgettable visual and narrative experience. It’s been nominated for the Arthur C. Clarke Award for best SF novel for 2018 and the Locus Award for Best Art Book. The RPG Electric State Dark RP was developed based in part on the book. A movie based on the book is also in development. 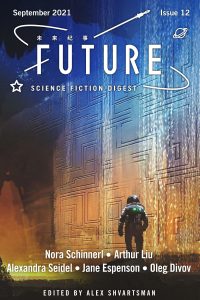