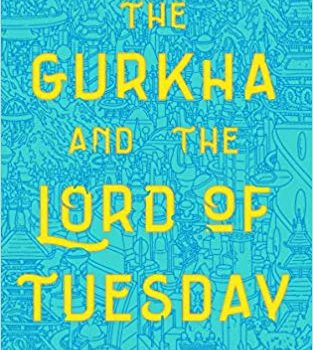 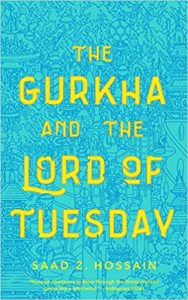 Saad Z. Hossein’s pissed-off djinn, awakened after thousands of years by melting ice in the Hima­layas (a nice, subtle reference to global warming), initially seems more concerned with his resumé than with vengeance: when he stumbles down the mountain and meets the crusty old Gurkha Bhan Gurung, he announces himself as “Melek Ahmar, the Grand Mark of the Tigris, Enlil of the Ziggurats, the Wrecker of Mountains, the Lord of Tuesday!” (It turns out that at some point in the past the seven most powerful djinns were each given a day of the week). The old Gurkha has a resumé of his own – a skilled soldier who years earlier had slaughtered nearly two dozen people in the home of a rich man, and who’s been hid­ing out ever since. The two of them head down to Kathmandu – and suddenly The Gurkha and the Lord of Tuesday takes a sharp turn from its remote fantasy landscape into the sort of hyper-urban SF that might have been dreamed up by Hannu Rajaniemi on a Nepalese vacation. Arriv­ing in town like Butch and Sundance, they find themselves in a nano-drenched postapocalyptic urban infoscape, in which clouds of particles and body implants protect the citizens from a poison­ous atmosphere, and which is managed entirely by an algorithm called Karma. Karma, we are assured, is not a self-aware AI; it doesn’t make governance decisions or even recommendations, but simply assigns or subtracts points from each citizen based on their actions and exchanges – a minutely quantified version of – well, karma.

At first “Kathmandu, Incorporated” seems to be a kind of post-scarcity utopia of the sort Frederik Pohl used to satirize. There is no economy, no currency (other than karma points), no crime, no disease, no private property, and no need for human labor of any sort. Melek and Burung, needless to say, are epic-scale disrup­tors in a couple of ways. For one thing, djinns can project a “distortion field” that interferes with Karma’s universal surveillance, and Bu­rung has removed the implants which make him visible to the system. They also quickly create chaos by starting a massive bar fight and allying themselves with a rebellious punk djinn kid who calls herself KPopRetroGirl. All this draws the attention of a bureaucrat who sets out to inves­tigate Burung’s original crime, all records of which seem to be lost, and to assess the threat to Karma’s delicate societal balance. As we might expect, this eventually leads to the discovery of cracks in the infallible system, dark secrets about Karma itself and its origins, and the potential for a messy, humanizing revolution. Hossein is a Bangladeshi author who has already established a formidable reputation for combining dark humor, loopy adventure, and breezy style with Escape from Baghdad and Djinn City. While those characteristics are much in evidence in The Gurkha and the Lord of Tuesday, he also shows a provocative knack for sharply satirical SF as well. It’s probably the funniest thing I’ve read this year.