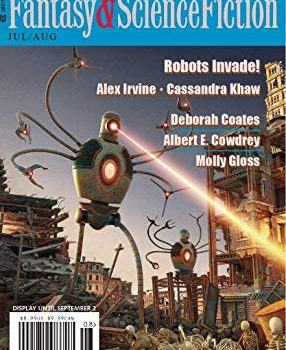 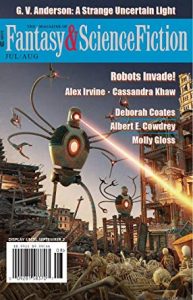 In the July-August F&SF, Cassandra Khaw‘s “Mighty are the Meek and the Myriad” is very impressive. It’s set the year after a human-robot war ended in a treaty, with robots serving as humans, and, in various ways, being “humanized” by having them wear hats and mustaches and giving them corgis as pets. The story follows two somewhat unpleasant hu­man characters: a vacuous American careerist named Harold and his boss Henrietta, a general who is realizing she misses war. It’s a curious mixture of satire of the different pretensions of Harold and Henrietta, comic interludes with the robots, and some really affecting passages, leading to a dark conclusion. The mix of tones is hard to pull off – it could be off-putting in the wrong hands, but Khaw really makes it work.

This issue demonstrates the range of subject matter and style that F&SF has always been good at. There’s more satire with Dominica Phetteplace‘s “Nice For What“, in which “professional influencer” Luliana is compelled to promote the cancer treatment she needs if she is to continue to receive it, the alternative being death. In the crosshairs, then, are the roles of social media influencers and the mess of our medical system, and neither come off well. Molly Gloss‘s “The Everlasting Humming of the Earth” is a pure character story. Joyce is a widow in her fifties, sometime in the very near future, who has always “sensed” the Earth’s tectonic activity (or so she’s thought). What we see is simply her, and her acupuncturist, and their Oregon milieu – nothing (forgive me!) earthshaking, but very well written and very acute. There’s also extraplanetary SF with new writer Eliza Rose‘s “Planet Doykeit“, a strange story that doesn’t quite come off, about Jewish settlers on a very inhospitable planet, and their unusual way of providing for the next genera­tion of children. Another new writer, Theodore McCombs, is quite interesting in “Lacuna Heights“, set in a near-future, climate-change altered San Francisco, in which the main char­acter, lawyer Andrew Cornejo-Holland, is afraid his implanted memory-assist technology may be hiding his own extramarital affair from him. The story effectively portrays the lacunae in his memory in a way that makes the story hard to follow – at first this is a bit hard to take, but it ends up seeming the right strategy, as we are finally led to understand what memories he is really suppressing. Good stuff, though I think it shows promise of much better work to come.

In Interzone for May-June, James Warner‘s “The Realitarians” is a slick near-future crime story about Jacinta, whose latest relationship, with Nestor, quickly has her involved with Russian mobsters in a plot that she thinks is about drug smuggling but which turns out to be something more sinister. All that is well-done, fastmoving caper stuff, nice but not necessarily special, but the story is well told, quite funny, especially with the talking cats that Jacinta repeatedly encounters or hallucinates as she descends eventually to the Paris underground and a particularly fraught conclusion.

I also liked “Harmony” by Andy Dudak, though I had some reservations about its all-too-inevitable conclusion. Still, the story, told by a spy/revolutionary trying to escape a to­talitarian regime that enforces obedience via an hypnotic song, grabbed me. Malcom Devlin‘s “A Dreamer Arrives in the Occupied City” is effectively mysterious, as Maya returns to an old haunt of hers in a city in which, strangely, dreams seem to be illegal, as they are claimed by the mysterious “lopers” who control the cities from their citadels. We never really learn much about the lopers, as Maya encounters her cynical old lover and witnesses a performance by someone who still seems to dream. So – I don’t know that I fully understand what Devlin’s after, and I confess I’d have preferred a bit more background, but I still found the story effective and involving.

The Spring 2019 issue is the third of Amaz­ing Stories‘s latest revival. Marie Bilodeau‘s “Out-of-Most-Worlds Planet Cessation Extravaganza” is amusing, about an alien charged with destroying the Earth (for, basically, Hitchhiker’s Guide to the Galaxy reasons), which wouldn’t be a problem, except she is sup­posed to make an entertainment of it. Still not a problem – she’s good at her job – but then there’s the squishy new intern she has, Steve, who keeps messing up…. Could this possibly be on purpose? Very slight, but amusing. Also slight, but sweet and affecting, is “Cricket Songs” by Kathy Kitts, in which a precocious young girl, mourning her mother’s death and not ready to accept a new stepmother, rescues a buglike creature that, she soon learns, communicates by music. It’s easy to see where this is going, but it gets there nicely enough.

Some of the same comments – slight but amusing – apply to Paul Levinson‘s “The Whether App“, which has fun with service calls dealing with a service to guarantee whatever weather you want at your home – but what if your neighbor has different ideas, and weather is chaotic, anyway? Levinson does well examining some of the outlandish ramifications. In the end I think my favorite piece was “Conservation of Mismatched Shoes” by Rosemary Claire Smith, in which Chrissa wants to escape a difficult family situation along with her older brother, who has told her of a way to escape to the “multiverse.” Perhaps to the surprise of both of them, they make it – but parallel worlds can still have problems, and, worse, there may be no way home. An honest story, convincingly char­acterized, and portraying a just-weird-enough alternate world for Chrissa and her brother.