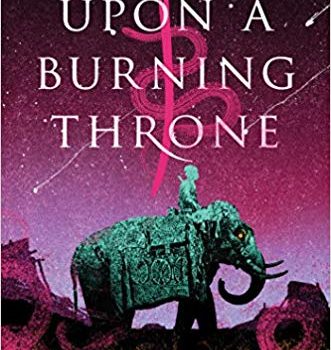 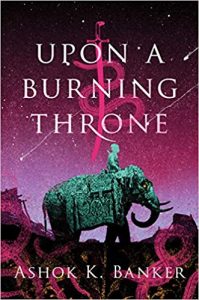 Ashok K. Banker returns to America with little to prove. He has already published dozens of books in India, including a great deal of epic fantasy. His American return, Upon a Burning Throne, is the first in a new series, the Burnt Empire. Whether the series will do as well here as his Ramayana series has done elsewhere remains to be seen. Although Upon a Burning Throne creates and animates a colorful and detailed world, it’s also repetitive and flabby, with overly dramatic writing and a dizzying array of characters. These flaws may be surprisingly easy to overlook for many readers, but others will tear their hair out by page 20.

Upon a Burning Throne retells the Mahab­harata, an ancient Sanskrit epic. Comparing a summary of the Mahabharata to Banker’s novel indicates that “retelling” is much more literal in this case than, say, comparing The Lion King to Hamlet. Banker has invented some of the circumstances of his novel and altered most of the names, but the story and relationships are often lifted precisely.

The Krushan dynasty, known for its warriors and its ability to survive and wield magical stonefire, is starting to founder after two young brothers (one blind, one albino) are declared its inheritors. Rulers of lesser empires attempt to unseat the guardians of the throne and assassinate the brothers. Battles, intrigues, and marriages ensue; demigods appear to try and change the course of the dynasty; people get their just deserts, or are slain unfairly; mothers and sons maintain unsettling relationships with each other. The story of Upon a Burning Throne is not thin or minor but, like Game of Thrones, it’s multi-stranded, and its smaller moves are less important than the end effect – that of having read an entire national history. The conclusion of the novel is hardly any end at all, as it’s clear this is the first volume in a continuous epic rather than a standalone tale.

At nearly 700 pages, “epic” certainly applies. However, the novel could have accomplished the same tumultuous story in easily half the page count. Banker has a number of exasperating tics as a writer, and the most indulgent of these is his tendency to say something several times in various ways rather than choosing one solid expression of any given idea. For example, he describes the demigod Vrath:

Vrath was a force of nature unto himself. He rode down cattle thieves, trampling them into the very dung of the cows they had stolen. Land thieves were buried alive in the soul they had presumed to encroach upon. Water polluters were treated the worst: for to Vrath, water was the mother of life itself. They were fed, piece by living piece, to the giant turtles and crocodiles and gharials, while their kinsmen watched. Terrible was his vow, and terrible were his punishments, which no wrongdoer escaped. No transgressor received mercy. No quarter was given to any lawbreaker. No excuse accepted for the very rich, the powerful, or even the pious. He treated – and punished – all equally.

We got the point long before the end of that para­graph, but damned if Banker didn’t write the whole thing anyway. The entire book is like this. Most paragraphs contain two or more sentences or clauses that say the same thing in different words again and again. Further, although the characters have unusual capabilities and make interesting choices, their actual characteristics are relatively ordinary. The women are beautiful warriors (or beautiful sluggards), the men are strong warriors (or strong betrayers).

The good news is that readers who don’t read prose very meticulously will barely notice the first prob­lem, and readers who love epic fantasy and hunger for huge, immersive examples of it will barely notice the second. A reader who’s excited about an exces­sively long epic fantasy novel, and not at all picky about how that novel is crafted, will absolutely love Upon a Burning Throne. It’s an immersive experi­ence: battle scenes go on for more than 50 pages and offer every possible angle on the event. Banker’s writing uses line breaks and declarative sentences to build drama, which ends up feeling like a movie trailer dropping big text and deep bass on you every 15 seconds, but the reader becomes accustomed to these rhythms over time. Some of his names are unimaginative – Darkfortress, for instance, or Mount Coldheart – but again, through the right eyes, this might be more fun than it is cringeworthy.

In the end, Upon a Burning Throne is a chance for American readers to join in on the high adventure and deep connection to Indian culture that Banker has been offering the rest of the world for decades. It’s a book designed to appeal to its audience, even if it doesn’t travel outside that audience particularly well. Anyone who’s been looking for a new mam­moth fantasy series will find these books a perfect well to dive into headfirst. 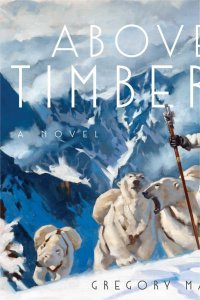 Paul Di Filippo reviews Above the Timberline by Gregory Manchess