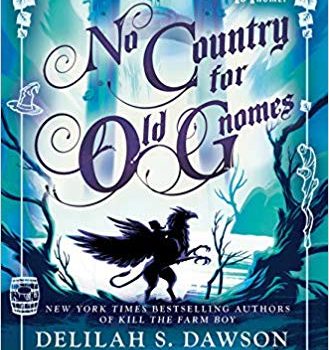 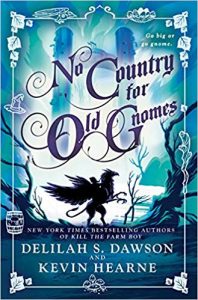 So my expectations for No Country for Old Gnomes were low: I expected not to cringe more than twice per page. To my happy astonishment, the book is a complete delight, as fluffy and fun as The Lego Movie and as heartfelt as Harry Pot­ter and the Sorcerer’s Stone. It’s about gnomes, who are cheerful and efficient and obsessed with cardigans, and how a pair of them go on a quest through the land of Pell with a predictably di­verse and ragtag group of fellow adventurers: an emotionally troubled ovitaur; a finicky Halfling; a peaceful, nervous dwarf; and a gryphon who nags endlessly about correct spelling. The novel continues where the previous Pell book by Delilah S. Dawson & Kevin Hearne, Kill the Farm Boy, left off. It does stand alone very well; I felt as if I’d missed only the fun of reading the previous book, rather than anything that would change how I absorbed the story.

The pleasures of No Country for Old Gnomes are many, and the humor ranges everywhere, including pop and internet culture (gnomes are a “smöl” race), absurd ideas with connections to traditional fantasy (the Toot Towers, shaped like flutes, are the quest’s destination), and excessive punnery and language play. Clearly, Dawson & Hearne have read an enormous amount of fantasy, and they toy with the genre gleefully. “Why would there be violence?” one character asks. “We’re just a motley group of beings making a long journey to a hidden and legendary place in the company of a mysterious golden machine that several people are already hunting. Surely we won’t encounter violence.”

However, thinking of the Pell series merely as a sendup does it a disservice. Beneath all the fun is a straightforward but compelling quest narrative with a few different strands, as characters have different reasons to travel with the group. The story offers many opportunities for personal growth and reflection, and a realistic take on how the violence and struggle of a quest wears down the questers – a rare quality indeed in fantasy literature. For instance, after a berserker moment, Båggi the dwarf considers what a life of adventure would feel like:

Looking around at the dead halflings and the troll, and realizing that he had done all that violence, Båggi felt ill. He didn’t think he had the temperament to always fight. And why would his limbs not stop shaking? It wasn’t cold outside.

The others came over and they said things to him, but it was all noise; he couldn’t process any of it.

Båggi isn’t the only creature grappling with his situation. Agape (whose name is the source of only one pun! Shocking), a part-person, part-sheep, has to figure out how to move beyond her crummy parents, develop better emotional boundaries, and boost her self-esteem. The halfling, Faucon, deals with a wrenching loss, and must continually explain himself to beings who are prejudiced against him. And our heroes, Kirsi and Offi, are both mistaken about a great deal, including their own strengths and weaknesses.

However, the virtue of No Country for Old Gnomes isn’t in its sweet and appealing characters, nor the solid plot I’ve avoided summarizing. It’s in the reading experience, the way jokes are set up and knocked down on every page, the fullness of the silly world the authors have created. The detailed, beautifully imagined map preceding the text is full of dumb jokes, dirty jokes, and sophisticated jokes. One of the towns is named Quchii Qu, next to the desert of Qul, adjacent to the Morningwood, which lies near a town named Four Skins. Should I really waste your time summarizing the plot?

When this book is serious, it’s winning and genu­ine. When it’s unserious, it’s unbelievably funny. It’s perhaps a little bit too long, but it moves quickly, and the pleasure of reading it rarely flags. Add Dawson & Hearne to that very short list of terrific humorous fantasy writers, and add me to the waiting list for the next book about the depths of Pell.