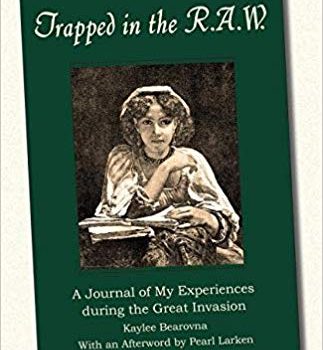 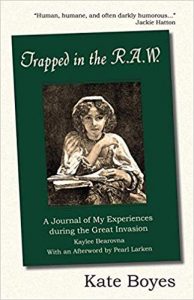 Every once in a while, a novel seems to drop in from out of nowhere, with little to go on but a promo let­ter and – in the case at hand – the reputation of the publisher. Aqueduct Press has earned a reputation not only for promoting feminist speculative work, but for discovering distinctive new voices. Sarah Tolmie (The Little Animals) and Isaac R. Fellman (The Breath of the Sun) are are two fairly recent examples. So it’s not too surprising that I’d never heard of Kate Boyes, whose biographical note in her first novel Trapped in the R.A.W. tells us that she’s a playwright and writer of travel and nature es­says, but mentions no prior published fiction at all. This is surprising, because, despite an unpromising title (the full iteration of which is Trapped in the R.A.W., A Journal of My Experiences during the Great Invasion by Kaylee Bearovna, With an Afterword by Pearl Larken and Appendices Compiled by the “We Survived” Series Group), the novel demonstrates a impressively assured voice, an ingenious, casebook-like structure in which the journal of the title is supplemented by several “appendices” written years later, and an equally creative use of illustrative material, drawn mostly from 19th-century books and the illustra­tions of Walter Crane. All of this creates the initial impression that this might be a sort of alternate-history period piece, like the variations on Wells’s The War of the Worlds that have appeared more often than necessary, but in fact it’s a near-future alien invasion tale set mostly in a university special collections library and told mostly in the form of the journal of Kaylee Bearovna, who barricades herself inside during the first couple of months of an inexplicable invasion that nearly wipes out the global population. The “R.A.W.” of the title comes from the librarians’ nickname for the collection – “rare and wonderful.”

Alien invasion apocalyptic dystopias, of which there are many, tend to align along a spectrum, with brutalist survivalism at one end (think of Cormac McCarthy’s The Road) and elegiac humanism at the other (one of the best examples remains George R. Stewart’s Earth Abides). Boyes lands firmly in the latter camp, not only celebrating the value of libraries and the preservation of culture, but also focusing far more on character than spectacle. Kaylee hasn’t had a particularly easy life – she was horribly betrayed and abused by a professor some years earlier, and has lost touch with her beloved daughter – but her quick-thinking response to the sudden invasion marks her as a classically competent SF hero. When she hears the screams of the dying and sees hundreds of odd figures in faceless brown outfits slaughtering people with a single touch, she barricades herself in the library and immediately begins sorting the details of her survival, from securing food and water, to such mundane details as toilet paper (which creates an almost comical dilemma in a rare-books library). Her journal makes for compelling reading, detail­ing her failure to save another survivor who makes it to the library door and eventually describing her tentative relationship with one of the invaders, whom she comes to call the Tall Man. When she decides to leave the library, she leaves the journal behind.

This leads to Boyes’s neatest touch: the journal is discovered decades later by an “expeditionary team,” resulting in a series of documents, mostly trying to discover what happened to Kaylee. Our new narrators include the editor of the published version of the journal, the leader of the expeditionary team, a contemporary friend of Kaylee’s who also survived, an academic cultural historian, and an anthropologist who presents interviews with other survivors who might have known Kaylee or her family. Boyes doesn’t always fully differentiate these voices (several sound a lot like Kaylee’s origi­nal journal), but the effect is unarguably moving, as we watch Kaylee transformed from a desperate and lonely figure into a kind of librarian legend, whose story only becomes richer as we piece it together from these later documents. There are plenty of unanswered or inadequately answered questions about the invasion itself, the aliens, and their own motives and social structures (though Boyes does think up an ingenious explanation as to how they could mate with humans), but that’s not really the point of a novel such as this. In a few pages you can wipe out most of a civilization with disease, war, alien invasion, or natural catastrophe, but it takes a deeply humane novel to convince us that continuity and community can be built from the ashes. 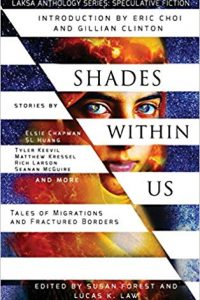