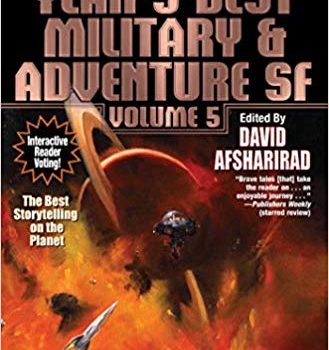 David Afsharirad, ed., The Year’s Best Military & Adventure SF, Volume 5 (Baen 6/19) Exactly what it says on the tin, with a dozen thrilling tales from the top writers in the field, including Suzanne Palmer, Christo­pher Ruocchio, Kristine Kathryn Rusch, and others, and an introduction by David Weber. Plus, readers choose one story from the anthology for The Best Military and Adventure Science Fiction Readers’ Choice Award, presented at Dragon Con. Voting details at <baen.com>.

Kevin J. Anderson, Spine of the Dragon (Tor 6/19) Massively prolific and bestselling author Anderson returns to epic fantasy with the first in a new grimdark series that promises swords, sorcery, politics, and ven­geance. Two warring continents must unite to defeat a reawakened ancient and powerful race. Perfect for filling that Game of Thrones void in all our lives.

Elizabeth Bear, The Red-Stained Wings (Tor 5/19) Following The Stone in the Skull, Bear expands the epic fantasy world created in her Eternal Sky trilogy with the Lotus Kingdoms, in which the sky has a black sun during the day, and at night is lit by a bright river of stars. Features a cast of characters that includes a wizard, a brass automaton, and a drifter known only as the Dead Man.

Max Gladstone, Empress of Forever (Tor 6/19) Glad­stone’s fantasy Craft Sequence was nominated for one of the first Hugo Awards for Best Series, and his new standalone science fiction novel is just as thought-provoking, lyrical, and surreal. When tech billionaire Viv is yanked into the far future, she must rally an army of warrior monks, pirate queens, and fighter pilots to defeat an all-powerful Empress.

Richard Kadrey, The Grand Dark (Harper Voyager 6/19) In an alternate, dieselpunk Central European city with robo-taxis, sideshow chimeras, and an energy source called “plazma,” citizens piece together their lives in the aftermath of a Great War.

Marko Kloos, Aftershocks (47North 7/19) First in the two-book Palladium Wars series about a devastating resource war in a distant star system. Kloos draws on his own experience as a soldier in the West German armed forces to infuse his military science fiction with compelling detail and grounded, believable characters. The result is an addictive, exciting space opera.

Laurie J. Marks, Air Logic (Small Beer 6/19) The long-awaited conclusion to the Elemental Logic series finally arrives! Small Beer re-released the previous three books (Fire Logic, Earth Logic, and Water Logic) with new covers by Kathleen Jennings. The final volume wraps up the history of Shaftal and the strange characters who inhabit it, including a clutch of young air witches.

Jason Sizemore & Lesley Conner, eds., Do Not Go Qui­etly (Apex 5/19) Subtitled “An Anthology of Victory in Defiance” and packed with 28 pieces about characters who resist, Do Not Go Quietly features stories and poems by Brooke Bolander, Maurice Broaddus, Cas­sandra Khaw, Sarah Pinsker, A. Merc Rustad, Christina Sng, Fran Wilde, and many more.

Neal Stephenson, Fall; or, Dodge in Hell (Morrow 6/19) This semi-sequel to 2011’s Reamde brings back Richard “Dodge” Forthrast and even mentions the Waterhouse, Shaftoe, and Enoch Root characters from Cryptonomicon and the Baroque Cycle, thus tying together thousands of pages of Stephenson’s fiction into a shared universe. There’s plenty of room within to explore the “Bitworld” afterlife that digital, uploaded souls, including Dodge’s, create for themselves, and if Stephenson could also include the loosely connected Snow Crash and Diamond Age, we might finally have a complete metafictional masterpiece on our hands.

Michael Swanwick, The Iron Dragon’s Mother (Tor 6/19) This standalone adventure is set in the world of living metal dragon jet fighters from The Iron Dragon’s Daughter (1993) and The Dragons of Babel (2008). “The irresistible appeal of Swanwick’s version of Faerie, along with his usual skill at drawing vividly complex and conflicted characters… lend the novel a density and texture that seems a bit surprising, considering all the fun we’re having along the way.” [Gary K. Wolfe]

Emily Tesh, Silver in the Wood (Tor.com Publishing 6/19) A folkloric queer love story with witch hunters, fae, and tree-people, “Silver in the Wood is a splendid piece of work, self-contained enough to be a perfect use of the novella form, rich enough to tingle on the skin, direct and meaningful enough to read aloud as a bedtime story.” [Katharine Coldiron]

We’ve all been there. You’re sitting in a movie theater or reading on your couch, and out of a character’s mouth comes the most laughably awful science you have ever heard. At first, you might try to hang onto your suspension of disbelief. But it’s just groan-inducingly wrong. Why couldn’t the writer spend five minutes on the internet to get it right? Maybe you vow to never see anything by