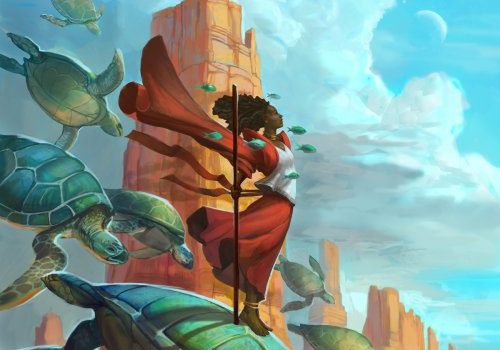 Kathleen Ann Goonan‘s story at Tor.com, “One/Zero” is a fascinating peek three-minutes-into-the-future. It’s told from two viewpoints: Vida is a teenager in Kurdistan, and the story begins in media res as her neighborhood is bombed and most of her family killed, sending her and her little brother on the road as refugees. An AV bus picks her and other children up and delivers them to a refugee camp, where she is given a tablet with a nascent super AI she names Ezo. In the other viewpoint, Mai has retired from NGO work and is filling her time volunteering in Washington DC and navigating the concerns of her grown daughter, who is worried about Mai’s health. The super AI her daughter sets up for her is MEDA, which quickly proves to be both useful and obnoxiously intrusive. Vida and Mai’s worlds and characters are revealed through their interactions with AI technology, and eventually we learn how their wildly divergent stories come to intersect. There are a lot of unanswered questions in this story, and possibly some wishful thinking, but Goonan is among the best at bringing tech, characters, and worlds together in thought-provoking ways.

“This Way to Paradise” by Rati Mehrotra is the lead SF novelette in May’s Lightspeed, and it also follows a refugee family. In this future India, tensions ramped up between India, Pakistan, and China, but as the countries were rushing towards a nuclear conflict, 40 million people from the biggest cities in each country disappeared with no trace. Tara, our viewpoint character, was two years old when this happened, and she and her aunt and brother have been navigating the resulting chaos and conflict ever since. Now eight years later, her aunt has been steering them North towards a rumored base with stable services (“Paradise”), but when they get there they find that the base’s mission isn’t at all what they expect, and Tara gets the opportunity to step up to take an enormous risk and possible reward. The story unfolds at an unhurried pace but manages to cover a lot of ground, with a big shift towards the end that pays off nicely. Mat­thew Kressel‘s SF story, “Truth is Like the Sun” is told in a completely different mode: it’s a 360-degree perspective of a single event – gender non-binary pop singer Jaim Jaman goes into orbit on a SpaceX vehicle to sing a set to the whole world. We get the social media reactions to the run up, the event, and the aftermath from users all over the world: from fans, trolls, ad bots, fashion designers, SpaceX crew, etc. I appreci­ated the choice to leave the center unfilled (we never get Jaim’s POV directly), and also what I perceived as a tentatively hopeful perspective.

Lightspeed‘s two fantasy originals also have entirely different scopes. “The Ocean that Fades Into the Sky” by Kathleen Kayembe was inspired by the issue’s beautiful cover art­work by Julie Dillon, and serves as an ecocritical intersectional allegory for our time. The actors in the story are all “gods,” the personifications of physical landscapes and structures on a world where humans arrived and began terraforming the native landscape. Coasts is the main protago­nist, and she’s been masquerading as her mother Oceans at the meetings that Ships demands they attend. As the story begins, Coasts has revealed her true identity to her lover, one of the coloniz­ing gods Obsequies, and it looks like this year’s meeting will not go smoothly. As these beings interact with love, violence, and power, we see narratives of race, class, history, colonialism, and eco-justice being played out on an allegori­cal stage. While some people may find it heavy handed, others may find this personification of the narrative quite powerful.

Adam-Troy Castro‘s short story brings larger-than-life characters back down to the mundane level. “The Minor Superhero, at Home after His Series Ends” does exactly what it says on the tin. It’s a slice-of-life portrait of a character who had a brief run during which an unlikely number of villains rampaged his immediate neighborhood, but has now settled down to mostly help out the superintendent of his apartment complex (except when he sometimes gets called up for major ensemble battles). Cas­tro has done a lot of media writing and has real insight into the ins and outs of how superhero narratives are plotted today, so he brings a nicely critical sensibility to this imagined run-of-the-mill super character. Sometimes your archvillain is the creepy guy who plays his TV too loud, and we’re glad that someone is willing to step up and deal with that, too.

If there hasn’t already been an anthology of fan­tasy stories set in restaurants, bars, and taverns, I bet the field of stories to choose from would be deep and have plenty of excellent contenders. Add to that number “Boiled Bones and Black Eggs” by Nghi Vo in Beneath Ceaseless Skies #275. The young narrator came to work in her aunt’s restaurant at the age of about ten or so, and is well used to the clientele both living and dead. Her aunt finds the right meals to serve to the deceased to help their spirits move on to the next world. Sometimes it might take a while, but none have ever spent so long, or been so obnoxious, as “Lord Ning of the Eight Valleys, martyr of the Battle of West Ridge, and favored son of the Great Emperor of the Heavens.” He declares every meal unsatisfactory (after eat­ing everything but the last bite), and will not cease recounting his gruesome acts against his enemies. He drives away all the customers, both living and dead. The aunt’s solution to this par­ticular dilemma is supremely satisfying.

Strange Horizons in April also features two tales of life with monsters. “What Cradles Us But Will Not Set Us Free” by Nin Harris (who’s had a really remarkable string of publi­cations lately) gives us a monstrous house and the monsters who live there, including a woman who used to be a famous architect. While enjoy­ing this surreal existence, she must also protect her children from the house and from herself. “Tessellations, In a Greater Hand” by Ar­tyv K gives us the perspective of a youngster in whose house lives a Smaran, a monster who may eat brains. She knows to avoid that room, but she worries when her grandmother moves in and is given that room as a bedroom – and her suspicions only deepen when she isn’t able to teach her grandmother English. This is a quiet story about language, intellect vs. learning, the impatience of youth, social constraints, and aging. 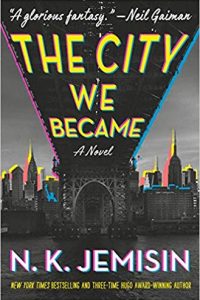