It’s taken some time for me to come to terms with the fact that I have developed fairly severe anxiety. When I say this out loud, of course, those in conversation with me often reply, “It’s 2019. Who doesn’t have anxiety?”

Anxiety is showing up sooner in children, too. My mom often points out that in her day, everyone was fearful of nuclear war, and the threat of climate change or war with Iran is no different. Kids were anx­ious then! They are anxious now! Same story. I then gently point out that, unlike a nuclear war, climate change isn’t something that might hap­pen; it’s something that is happening, and that will continue happening. Climate change is not Schrodinger’s cat. We know the outcome. That makes optimism and hope a lot more difficult to cling to, and anxiety ratchets up the more one stays glued to the news.

I like the analogy of chronic anxiety as a faulty fire alarm. Think about those times a fire alarm has gone off in your house suddenly, for no ap­parent reason. It screams at you constantly as you check batteries, yank out plugs, and finally replace the damn thing, only to hear it beeping again a few hours later. That’s what it’s like to have chronic anxiety. Your body’s fire alarm blares even when you know, objectively, that you’re just as safe in that moment as you were a few moments before. Anxiety results in elevated startle responses; even a car driving too close on the freeway might cause a debilitating anxiety attack.

But a better analogy for the chronic anxiety today is probably a fire alarm that continues to go off in a house that is slowly filling with smoke, but not yet enveloped by gouts of flame. Much of the anxiety in the world today is happening for good reason. I was reminded of this a few months back when Google told me my city was in the middle of a tornado emergency: three tornadoes touched down in and around the area I live, all in about an hour. Far from being a strange occurrence, I knew this was going to become normal. What we think of in the US as “tornado alley” has moved about five hundred miles east, which means states like mine, Ohio, are going to see greater numbers of these spin-ups.

I have a great doctor, and a balance of drugs, diet, and activity, includ­ing meditation, that help keep me on an even keel most of the time. Like most Americans, though, I have little to no safety net, skyrocketing medi­cal costs, and an increasingly severe climate to contend with out here.

Those answers are different for everyone, but what I’ve found is that it’s the writing that sustains me through the worst of it. The writing is something I can control. Certainly this doesn’t mean closing one’s eyes to the horror. Protest, calling representatives, volunteering for storm cleanup, and taking your drugs are all ways to take action in the face of events that overwhelm.

We are living through a time of extreme and rapid change. Making major shifts to the path we’re on will require cooperative work among people and governments on a scale only seen during wartime. Our small, individual contributions can seem irrelevant in the face of such enormity, but capturing the imagination through story is what writers do. We are not only creating comfort and escape for those who need to rest and heal, but also catharsis and inspiration for better futures, for different ways societies could function. As a science fiction writer, I have found it demoralizing that some of our best works, such as 1984 and The Handmaid’s Tale, seem to have been taken up as guidebooks instead of warnings. Perhaps it was simply that these books understood the inevitable path that society would take; they were prescient. But for every vision of the unevenly distributed cyberpunk dystopia we’ve found ourselves in, there were other works that described something more humane, more egalitarian, while still having us deal with very human problems via the page.

I’ve found that focusing on a better future, and putting that into my work, has helped me deal with the news cycle and the rampant anxiety. Certainly, turning off news channels and limiting my access to the rage-inducing pitch of social media streams helps, too. It’s too easy for me to work out a future of mass migration fueled by climate change and corporations that act as governments, because it’s very close to reality (and indeed, I did write about the inevitable end of that future in my book The Light Brigade). Increasingly, my interest is on the future that comes after that one. What does a more egalitarian world look like? What happens after capitalism? How does the world work after the climate has stabilized again into a new normal, or after we have recaptured carbon and brought the climate back to human-friendly levels? What will be differ­ent? What will be the same?

By writing in those futures, I do find my­self less anxious. The feelings of pending doom lessen. Even imagining a function­ing human world after the year 2100 is an intrinsically hopeful activity. I have been watching The Expanse and musing about how humans spreading across the solar system, and an Earth with a universal basic income and levees around New York to keep it from sinking, are giving us a vision of the world as it could be, if we take ourselves and our changing world seri­ously. We are what we immerse ourselves in. We are the stories we tell ourselves.

Pushing back against nihilism is itself an act of resistance. We have been sold a story about our inability to change the future, when in truth we are changing it all the time. In writing about it, I free myself from that tired old narrative.

For a few hours each day while working on my new book, I visit a universe where those with the most capital believe in giving it back to the people whose labor made them rich. It’s a world that mostly func­tions on a socialist narrative, one where those who hoard capital and cheat the people are frowned upon and ostracized. It’s a world that’s easy to imagine because frankly, extreme, unregulated capitalism is a rather new phenomenon in world history, one intrinsically tied to the fossil fuel industry that is driving the climate-changing carbon influx transforming our world. It’s all related. That means I have plenty of other time periods and societies to look at for templates. It’s certainly far less speculative to create a more egalitarian and humane world than to create faster-than-light technology.

When I feel the anxiety of the greater world bowing me under, then, I consider the past. I consider the future. Most importantly, I turn off the news. I walk away from the social streams. I know I cannot walk away from Omelas. I cannot pretend children aren’t in cages at the US border. But I can carry on with my work in the face of this reality. I can live to rage against this present. I can be a thorn. A screaming dissident. I can carry with me a blueprint for a future that isn’t this one.

This article and more like it in the August 2019 issue of Locus. 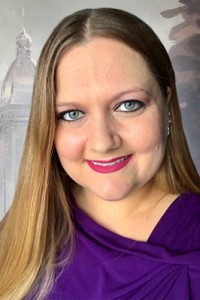 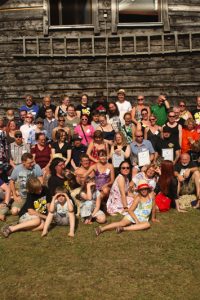