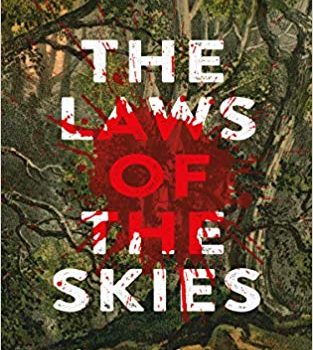 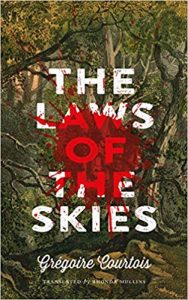 In March this year, my eight-year-old son Joshua went camping for the first time. A month later I read The Laws of the Skies by French author Grégoire Courtois (translated by Rhonda Mullins), which involves a group of six-year-olds embarking on their first-ever camp trip. If the order of these two events had been reversed, if I’d read Courtois’ novel first, I might have prevented Joshua from leaving the house. From the opening page of The Laws of the Skies, we are told that the 12 children about to head off to the forest, supervised by three adults, some of them “crying as they waved goodbye,” others “chattering with each other as if they had never had parents,” will never return. It’s a chilling bit of foreshadowing and, over the course of 160 tightly plotted pages, with the assistance of the most violent and psychopathic six-year-old to ever grace literature, Courtois delivers on the promise.

As someone who has read more than his fair share of splatterpunk, who spent his twenties actively searching for the most taboo and blood­thirsty books and films, The Law of the Skies cut me to the bone. Partly it’s because I’m now a father and I have a lower threshold for fiction that puts children in mortal danger, and partly because Courtois dispatches these children with a lyricism and intimacy that’s soul-shattering in its execution (kudos to Rhonda Mullins, it couldn’t have been easy translating this book). As an example, at one point our omniscient narrator breaks the fourth wall to inform us that a

child doesn’t die like you, an adult or an old person reading these lines. Children die without having had a chance to picture the end, without a sense of it being born and maturing within them. They die the same way they get lice or a skinned knee. They die without understanding, with their childish naivety imagining death the way they imagine April showers, meteorological inevitabilities that eventually pass, not knowing or realizing that this inevitability does not pass.

It’s an extraordinary passage, forcing the reader to confront a topic they’d generally avoid. Courtois frequently does this throughout the novel, asking us to imagine what these children might be suffer­ing as their minds shatter under the strain, as they face the horrible certainty of death. It’s disturbing and confronting, but it also elevates The Law of the Skies beyond the type of gratuitous horror fiction that aims to be “edgy” and controversial. This is a novel that reminds us, whether we like it or not, that there are presently children, even younger than the six-year-olds depicted in this story, that are regularly required to witness and experience acts of abuse and savage violence – whether it’s a school massacre or a locked cage or a crowded and leaking boat.

The Law of the Skies is not an easy book to digest, and I’m sure it won’t be to everyone’s tastes, but I found it exhilarating to read a novel that’s this unflinching, this nihilistic, and also this deeply profound.