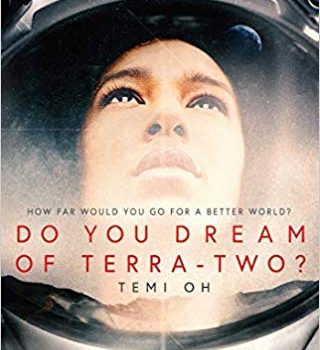 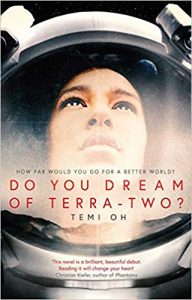 First, this book is a doorstop. I am not kid­ding, it’s a book about a deep space mission that doesn’t even leave the ground until more than 100 pages in. It has a big cast of char­acters (six living teens, one dead one, four adults, plus mentions of various parents and assorted other living and dead space-related people), there are two planets (one of them being Earth), and three spaceships plus shuttles plus, oh, heck. It’s 528 pages long; there is just a lot of everything in Temi Oh’s debut novel, space saga Do You Dream of Terra-Two? Fortunately, there is also a lot of story, which keeps the reader zipping along. This book is a doorstop, but it’s also an incredibly unique and realistic space novel that will give read­ers a lot to think about and should not be missed.

It is not the near future; in fact it is the barely recent past. This fictional Earth is in the situa­tion ours is in, or perhaps a little bit worse. The impact of climate change has made the likelihood of a safe future rather grim, and so various space agencies have been working on various plans to reach a distant planet, Terra-Two, and have begun a colonization project. As humans have already been to Mars and there are other missions slightly beyond that point, reaching Terra-Two is not im­possible. The problem is that it will take over 20 years to get there, and so the first astronauts need to be very young when they depart. The solution is a space academy for teenagers and a selection of six of them to launch, with four older, experi­enced astronauts, when the younger “beta” group is under 20 years old.

In most space operas, there is an attack or some other horrific drama brought upon the people traveling in space. There certainly is, eventually, something dramatic that happens to the crew of the Damocles (spoiler alert: no aliens), but most of the narrative involves itself with the quieter dramas involved in the reality of this great commitment the young crew has made. Prior to departure, their lives were filled with family issues and the pres­sures of academia; there has been little time to dwell on what they are getting into. But once on Damocles, once they have settled into what will become a years-long rhythm of life and work, then the proverbial wheels start to come off the bus. People get depressed, they get sad, they get angry, and they get frustrated. Relationships, sexual and otherwise, start and stop. The beta team learns they have been lied to by the older team, and the old guard learn that treating their fellow astronauts like they are kids is not going to work anymore. There are fights – a lot of fights. Hovering over it all is a ghost, or the imaginary manifestation of a dead classmate because one of the beta members is suffering from PTSD and thinks the dead class­mate is following them in space. Basically, before a sudden and devastating accident, everyone on the Damocles is breaking apart in different ways. The fact that none of this may be a surprise to the people who sent them there, to the ones who planned the mission and trained the astronauts, is immaterial. Space missions, especially longterm space missions, are first and foremost about the launch. After the spaceship is gone, especially the kind of distant gone that Temi Oh is writing about, then it all becomes less important. Does anyone know what’s happening on the International Space Station right now? Can you name the astronauts and cosmonauts onboard?

I didn’t think so.

Do You Dream of Terra-Two? is not the usual sort of space novel; it’s an investment in relation­ships, a look at how complicated the social aspects of interstellar space travel will likely be. Temi Oh takes big risks with this big novel, and I think she accomplishes some big things. It’s not what you expect but, in every important way, it’s what you really need to read. 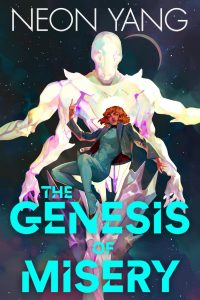 Alexandra Pierce Reviews The Genesis of Misery by Neon Yang 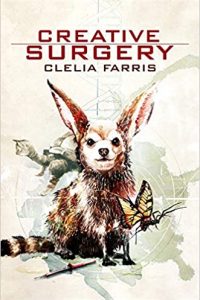