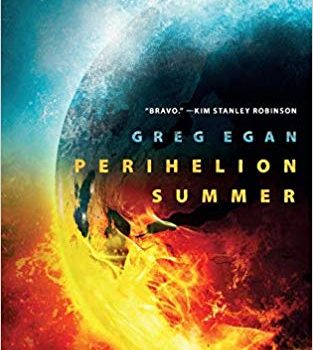 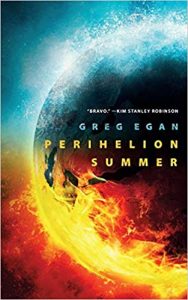 Once again the imagination of disaster is upon us, haunting our dreams and filling our entertainments with scary scenarios. What is disaster that we should be mindful of it in an entertainment? Or, to be precise, what is there in scary, disaster-haunted storytelling that goes beyond the threats and thrills followed by the relief that comes from having it not happen to us, and/or having our surrogate characters survive or even prosper? (Counter-examples of this pat­tern do exist – viz., Joanna Russ’s We Who Are About To.) Is it just the ride – a place to experi­ence ersatz dangers, protected from real harm by the safeguards designed by careful engineers who make sure that the rollercoaster car won’t come off the tracks, that the Ferris wheel won’t fling us into space at the top of its arc?

Greg Egan’s new short novel, Perihelion Summer, is certainly more than “just a ride”: a description of how wrong things can go and how fast, a hard-SF, procedural-didactic treatment that follows its disaster from causes through effects and responses, supported by the meticulously precise observations of processes one expects from this writer.

The problems begin with a pair of black holes that disrupt the Earth’s orbit as they pass through the solar system. The new orbit is eccentric, which means hotter summers and colder winters – and not just a little variation, but enough to disrupt global civilization. The full nature of this disaster only emerges about a quarter of the way through the book. First, we are introduced to viewpoint character Matt and his partners Arun, Jožka, and Yuki, who have designed and built the experimen­tal craft Mandjet – part ‘‘floating fish farm,’’ part self-sustaining seagoing habitat/vessel. They take the Mandjet out to sea to observe the transit of the black hole called Taraxippus – which turns out to be a binary black hole – and to ride out the tidal effects a close approach could generate.

These early chapters also sketch in the range of social and political reactions (many not entirely rational or practical) to the possible effects of the event, as well as descriptions of how Taraxippus’s nature and path are discovered (gravitational lens­ing, Einstein rings, lots of calculations with uncer­tainties at the edges). Then the disaster proper kicks off, as temperature extremes render swathes of the planet effectively uninhabitable, triggering social disorder, death and destruction, and migrations to survivable latitudes. The rest of the book unpacks the implications of political pathologies and clima­tological disturbances as populations face or flee the deadly extremes of ice and fire, and the Mandjet crew tries to find a role for their craft in the disorder.

Whether he’s working in settings far out or close in, Egan always insists on examining and unfold­ing the way the world works and the ways we interact with those operations, and I have more than once found myself using “relentless” to describe his precise depiction of even the most imaginary of processes in the most exotic environments. In this case, the processes are the effects of climate change, recon­figured to bring it on faster and in a more extreme form than current models predict, with a pretty clear agenda: to make it real for our imaginations here-and-now, not as something that later generations will have to cope with.

This is not going to be the same as two degrees of global warming… most things that break from one extreme are not going to repair themselves when they’re slammed just as hard in the opposite direction. Crops are going to fail, forests will die, reefs will vanish, fisheries will collapse… and not by the end of the century. Some within a decade. Some within a year.

Sure enough, despite a handful of high-tech responses in high-resource cities, populations flee unlivable locales, overcrowding and overstressing sanctuary territories, when they can even manage to find and enter them, and the apocalyptic horse­men ride out.

The book also models the rational, the possible, the decent, and the humane in its picture, as though reluctant to give in to the most melodramatic options offered by the situation. The story line is a catalog of challenges and responses – what one might do in the face of disaster and what might go wrong with that effort. It’s one damn thing after another, though not arbitrarily so, and Matt consistently resists extreme responses, whether social or physical, to what he encounters. His approach is to analyze, understand, plan, and respond, always with an awareness of the human costs of action. A sequence involving a hijacking offers the greatest challenge to the temptation of conventional melodrama and the most satisfying and unexpected resolution. Egan is modeling both an accelerated version of the future we face and a perhaps-as-unlikely kind of response to it – a rational and humane refusal to give up or give in to survivalist power fantasies and magical thinking. 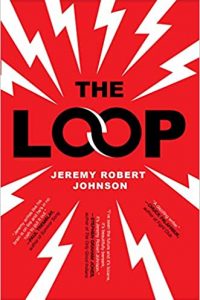 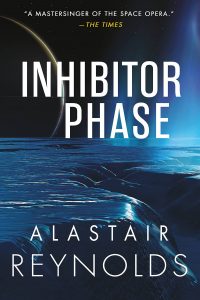