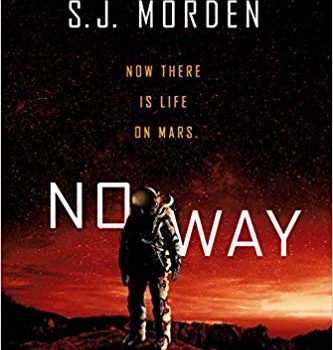 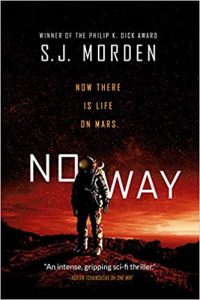 In One Way (2018), S.J. Morden mashed up two kinds of procedural: a very hard-SF planetary-pioneering adventure (the building of the first Mars base) and a countdown murder mystery modeled on Agatha Christie’s And Then There Were None. That book ends with the murders solved and the surviving character facing an un­certain future. The sequel, No Way, continues the hard-SF side of the story line, now transformed into a Robinson-Crusoe-on-Mars tale, combined with yet another set of motifs which can’t really be discussed without spoiling some of the sus­pense, particularly for readers who have yet to read One Way. So be warned: beyond the next two paragraphs lie what might constitute spoilers. (And if anyone insists on reading this book first anyway, there is sufficient background included in the early chapters to prevent complete bafflement. On your own heads be it.)

Frank Kittredge is the sole survivor of a crew of lifer convicts drafted by the amoral XO Corpora­tion, which “just happened to own both a prison and an aerospace outfit,” to provide the labor needed to construct a Mars base for a group of astronaut-scientists that will follow. The climax of One Way has left him alone on Mars, with a working base that he can maintain while he waits for the arrival of the NASA expedition, and No Way opens immediately thereafter, with Kittredge facing the basic challenge of staying alive in the hostile Martian environment, along with other psychological and practical matters: crushing isolation, the emotional aftershocks of previous events, and the problem of what story he is going to offer the official Mars expedition when it arrives. Kittredge is a tough, pragmatic guy, though, and he is coping reasonably well until he has an experience that nails down the Robinson Crusoe parallel.

The earlier book’s non-murder-mystery side dealt with the challenges of building a team out of the raw materials of a gang of lifers, people who possessed practical and technical skills but whose personalities and life choices were not very prom­ising. Partly thanks to Kittredge’s background as a contractor and manager of building projects, the convicts did manage to function pretty well before the murder plot eliminated them. In No Way that situation is inverted: the NASA Mars expedition is a well-tuned team and Kittredge is the misfit outsider who needs to fit in – and keep secret the real history of the base. His mind is dominated by a practical, non-pathological paranoia – he needs to conceal from both the NASA team and, for different reasons, the criminal powers at XO the truth of what happened and his role in it, while also finding a way past dangers he can’t reveal (and that I can’t reveal here, either).

What the two books share most strongly is a vivid, tactile sense of the unforgiving Martian environment: the near-vacuum, the cold, the omnipresent dust, the treacherous landscape. Even the sophisticated hardsuits are clumsy and vulnerable, so every second spent outside the habitats requires vigi­lance, while life inside requires constant monitoring and maintenance of vital systems – tasks intended for a whole crew, not a single man. The physicality of Kittredge’s situation is never far from the center of attention. On the psychological side, he also has to come to terms with his view of himself – the kind of person he has become in order to survive. He started out a hard-nosed, no-illusions guy, but the strains generated by the events of both books test that toughness to near-destruction. And when the NASA expedition arrives, he has to manage the deceptions that will preserve his secrets and protect the astronauts from XO’s schemes.

The rest of the book’s complications arise from those schemes and the dangers they trigger, and as with One Way, the corporate-memo chapter epi­graphs hint at the Earthside maneuvers that Kittredge can’t see. It makes for a satisfying set of tensions: physical dangers, psychological tensions and trap­doors, criminal conspiracies, and the merciless and fascinating Martian landscape always waiting for someone to make a fatal mistake. I have my suspi­cions as to the possibility of a third Way book, but to voice them would spoil the pleasures of suspense and surprise in this one.