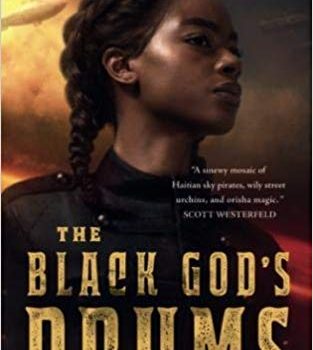 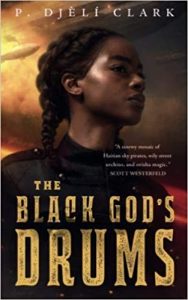 The recent Nebula Award nominations alerted me to some work I’d missed. A couple of the novella nominees came out from Tor.com Publishing late last year. Both are very enjoyable. P. Djèlí Clark‘s The Black God’s Drums is set in an alternate New Orleans some decades after a Civil War that turned out very differently from our timeline’s: thanks to slave revolts, New Orleans is a free city welcoming to people of all races and much of the Caribbean makes up the Free Isles, while the Union and the Confederacy declared a truce in their exhausting war, leaving the Southern slaves in bondage, worsened by chemical treatments that sap them of initiative. Creeper is a young teenaged street child, living by thievery, but dreaming of escape, perhaps via a pi­rate’s airship. She is also possessed – in a sense – by Oya, a wind goddess. One day she overhears some Confederate soldiers and learns they are plotting to claim the “Black God’s Drums,” a magical weapon, from a treacherous Haitian scientist. Creeper tracks down Ann-Marie, captain of the pirate airship Midnight Robber, and offers her information in exchange for a berth on the ship. She also realizes that Ann-Marie is possessed as well, by a water goddess. Ann-Marie is a reluctant co-conspirator, for multiple reasons, but needs must when the devil drives, and they, with the help of a couple of very unusual nuns, end up in the New Orleans swamps, confronting feral ex-Confederates who objected to the truce, the Haitian scientist and his “jewel,” and another magically powerful foe…. This is great fun, and fast-moving, with a well-voiced main character.

Alice Payne Arrives by Kate Heartfield is a time travel story in the mode of Asimov’s The End of Eternity, or perhaps even more of Leiber’s The Big Time. It opens in in 1788, with Alice Payne, an Englishwoman of half-Jamaican ancestry, am­bushing a carriage as part of her continuing Robin Hood-like role as the Holy Ghost, a highwayman who only steals from sexually abusive men. She uses the money to keep her father’s decaying household out of debt – her father having returned from the Revolutionary War a broken man. Meanwhile (a chancy word to use in this book!), Prudence Zuniga is in 1889, trying to prevent the death of the reform-minded Crown Prince Rudolf of Prussia, and failing again. We learn that she is one of a group of time-travelers calling themselves the Farmers, who are trying from the perspective of 2170 to create a better future. They are opposed by a group they call the Misguided, while Prudence is plotting with a third group to end time travel altogether. Soon enough she stumbles into Alice’s time, and unwisely engages the assistance of Alice and her mechanical genius lover Jane. The story gallops from there, back and forth in time, tangling the motivations of the Prudence, her sister who goes in and out of existence with the Farmers’ time manipulations, the Farmers and the Misguided, and of course Alice and Jane – who turn out, despite their status as naïfs, to hold the trump cards. It’s a good deal of fast-moving fun.

The sequel has just been published, Alice Payne Rides. I didn’t really think the first story needed a sequel – it was resolved sensibly – but this works well. There are further time manipulations, stretching back to Arthur of Brittany, who should have been king instead of King John. There are exciting scenes set during the Revolutionary War, and we learn a lot more about Alice’s father. Prudence is subjected to nasty manipulations by her erstwhile boss. Once again, it is Jane and Alice who must find a way to set things right – at least for a while. More really enjoyable stuff.

Paul Di Filippo‘s novella Aeota also features time travel and altered timelines. Vern Ruggles is a PI who has lost his Ukrainian wife Yulia, due to his drinking and womanizing. Now he’s working for a pretty, young rich woman whose husband has disappeared. Between attempts to get into her pants, he starts re­ceiving mysterious texts involving an organization called Aeota. Things get really strange as he tracks down the ever-changing Aeota and ends up traveling backward and forward in time, from the distant past and far future, a pawn of what seem to be battling slime molds. He also sees an alternate timeline in which he stuck with Yulia – and other more sinister alternate times. It’s wild stuff, Di Filippo’s notori­ously strange imagination working at its weirdest. Fun, if a bit overcooked. 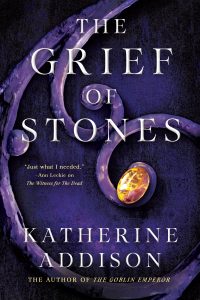