Ted Chiang, Exhalation (Knopf 5/19) The second collection (after 2002’s Stories of Your Life and Oth­ers) by one of our most celebrated and award-winning writers features nine stories (a third of them Hugo Award winners), including originals “Omphalos” and “Anxiety is the Dizziness of Freedom”. These stories “have much the same kind of appeal of Borges’s most provocative tales – not without feeling and empathy, but, fundamentally, explorations of the sheer romance of thinking.” [Gary K. Wolfe]

Meg Elison, The Book of Flora (47North 4/19) This concluding volume of the Philip K. Dick Award-winning series subverts the expectation that repopulating a postapocalyptic world is foremost among everyone’s priorities, and instead focuses on reproductive rights, gender identity, and sexuality. “With The Book of Flora, Elison displays a confidence in how she fleshes out her wonderful characters, how she plays around with perspective and chronology, bouncing backward and forward in time, and how she ties it all together in a climax that’s surprising, moving, and beautiful.” [Ian Mond]

Charlaine Harris, Small Kingdoms & Other Stories (JABberwocky 5/19) Best known for her Sookie Stackhouse novels and the True Blood HBO series, Harris here presents four suspenseful short stories about her recurring character Anne DeWitt, a high school prin­cipal with a dark and violent past. This is the first time these stories have been collected together, each previ­ously published in Ellery Queen Mystery Magazine.

Guy Gavriel Kay, A Brightness Long Ago (Berkley 5/19) Kay returns to the historical fantasy setting inspired by Renaissance Italy, last seen in Children of Earth and Sky, for his new novel. Filled with mercenaries, assassination plots, thrilling horse races, and, of course, ghosts, A Brightness Long Ago “isnot only the latest example of [Kay’s fiction], it’s also one of the best.” [Gary K. Wolfe]

Jack McDevitt, Octavia Gone (Saga 5/19) The Alex Benedict series rockets onward in this eighth volume about the interstellar antiquities dealer as he and his assistant Chase Kolpath hunt an alien artifact that may explain the fate of a team of scientists that disappeared from a space station orbiting a black hole. The third Alex Benedict book, Seeker, won the 2006 Nebula for Best Novel, and four others in the series were nominees. Octavia Gone promises to continue McDevitt’s award-worthy science fiction mysteries.

Seanan McGuire, Middlegame (Tor.com Publishing 5/19) McGuire has written Hugo, Nebula, and Locus Award-winning fantasy series, but she’s also highly skilled at standalone novels, as evidenced by Middlegame. Roger and Dodger are twins with supernatural command of language and mathematics, respectively, and are being manipulated into godhood by the shadowy Alchemical Congress. Fans of McGuire and fantasy in general are sure to discover a new classic in these pages.

Max Porter, Lanny (Graywolf 5/19) Porter won the International Dylan Thomas Prize for his debut, Grief Is the Thing with Feathers, and this follow-up cements his reputation as an ambitious and experimental writer. Following a Green Man-type figure named Dead Papa Toothwort who latches onto a young boy in an English village, “Porter pulls off the near-impossible by writing an overtly experimental and surreal novel that’s also accessible…. I already know Lanny will be one of my top five books of the year. It might even end up being my favourite.” [Ian Mond]

Chen Qiufan, Waste Tide (Tor 4/19) Seamlessly translated by Ken Liu, Qiufan’s debut novel is set on “Silicon Isle” off the coast of China, where waste workersscavenge and recycle advanced tech discarded by the rich, including some things which perhaps should not have been thrown away. “A complex and provocative exploration of the interactions among social class, cor­porate ambition, cultural identity, environmentalism, and human potential, with enough buzzy ideas to power a couple of novels, and enough violent melodrama to keep the reader plummeting along.” [Gary K. Wolfe]

Rudy Rucker, Million Mile Road Trip (Night Shade 5/19) More four-dimensional topography and weird aliens from the mathematician/cyberpunk pioneer who brought us Spaceland and Mathematicians in Love results in a surreal version of the classic road-trip story. “The book ends as vibrant eucatastrophes must: with bravery, courage, resilience and ingenuity facing down peril, greed, hate and selfishness. Readers will feel that every inch of the million mile road trip was worth it.” [Paul Di Filippo]

Karen Russell, Orange World and Other Stories (Knopf 5/19) This collection from the Pulitzer Prize finalist features eight stories originally published in The New Yorker, Tin House, and Zoetrope. With a bog girl, tornado farming, and a Faustian deal that requires breastfeeding a demon once a day, Russell’s stories effortlessly combine the literary and the fantastic. “Her prose is a delight to read, sometimes elegant, sometimes poetic, always rich with mean­ing.” [Ian Mond]

Tad Williams, Empire of Grass (DAW 5/19) The second book in The Last King of Osten Ard trilogy, a new epic fantasy “sequel series” set in the universe of Williams’s earlier Memory, Sorrow, and Thorn. As the kingdoms of Osten Ard slip inexorably toward war, only the puzzle of the Witchwood Crown can keep their civilization from collapsing. Fans of the earlier series won’t be disappointed.

September 14, 2013 admin Comments Off on New in Paperback, late August to mid-September 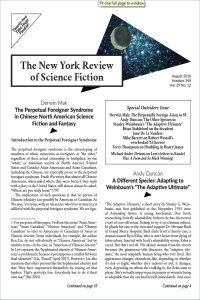 The 2019 SFWA Nebula Conference was held May 16-19 at the Warner Center Marriott Woodland Hills in sunny Califor­nia for the first of two years. There were 465 warm bodies of the record-breaking 475 registered members, compared to 356 in 2018. The hotel was comfortable, with spacious mingling areas, a well-appointed bar, and eateries within a few (albeit large) blocks. Each attendee received a logo-adorned bag stuffed with books. The