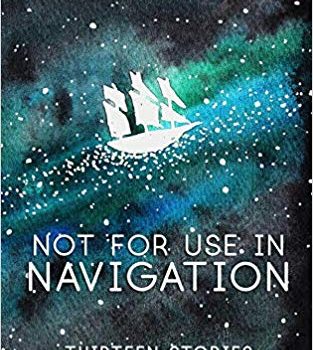 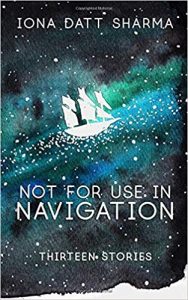 I read Iona Datt Sharma’s short-fiction collection Not for Use in Navigation almost by accident, at the end of a chain of happy coincidences that both led me to learn about its existence and to read it in a single sitting. Datt Sharma is a writer at the beginning of their career, but one whose graceful prose and elegant precision of characterisation bids fair to make them a writer worth paying attention to.

That’s not to say that all of the 13 stories col­lected in Not for Use in Navigation are outstand­ing examples of the form. I begin to suspect on the evidence of “Penhallow Amid Passing Things”, a novelette published elsewhere, and “Quarter Days”, which is either a novella or a novelette and is easily the longest story in this collection, that Datt Sharma’s talents are shown to best effect when they have more space to give them rein. Though there are several strong stories in this collection, there are an equal number of stories that, while deft and entertaining, feel slight and rather underdeveloped. (The folktale voice that Datt Sharma uses for the series of space operatic stories about a female interstellar conqueror and ruler called Akbar and her advisor Rani Birbal is not one that appeals to me, alas, and these stories are so short as to feel practically synopsised.)

All the stories in this collection share a certain air, a mood not quite of melancholy or alienation, but of wistfulness and grief, of fitting into the gaps between certainties of belonging. A mood more easily expressed in what goes unsaid than in speech. (These are also, not casually but essentially, deeply, investedly queer stories, without being stories about queerness, and stories that are in conversation with queer politics without being politi­cally queer as their entire raison d’être.)

“Quarter Days” is the strongest story here, set in a post-WWI London where there are two associa­tions of magical practitioners among the London Guilds: the Salt, and the Birds-in-Flight. These magical practitioners interact with the legal system in interesting, and interestingly codified, ways. Datt Sharma’s worldbuilding is a joy, and so is their char­acterisation. Grace, the story’s protagonist and part of a practice within the ambit of the Temple, finds herself – and her colleagues, who carry their own injuries from the war and their own difficulties – at the centre of an inquiry into a railway accident. The story focuses intensely on personal relationships, choices, consequences, and the social world of its characters. It rewards attention.

“Flightcraft” is another strong story about per­sonal connection, magic, and living after a war. (Again, a WWI with magic, though in a Britain – or Britain-analogue – with much less visible sexism.) Structurally, it works as a romance.

A shout-out to “Archana and Chandni”, which is a science fiction story about a wedding. Archana’s getting married and putting up with a lot from her family in the name of tradition. Her little sister, Chandni, has a human body but is also a spaceship. This is a lovely exploration of affection, belonging, and what’s the right point at which to tell your rela­tives to shut it and just elope, while also being at times really quite funny.

The stories in this collection are deeply character-focused, and their stakes are usually intensely per­sonal. They’re science fiction and fantasy stripped down to the domestic and the interior: small acts, ordinary settings, aftermaths. They’re elegant and affecting, and I enjoyed them a great deal.