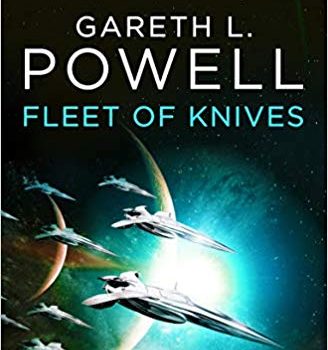 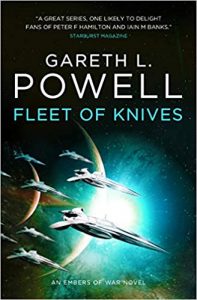 Fleet of Knives is the sequel to BSFA Award-winning author Gareth L. Powell’s Embers of War, in which sentient ex-warship Trouble Dog and her crew – including Captain Sal Konstanz – fell face first into trouble associated with their job for the House of Reclamation (an apolitical interstellar organisation dedicated to search and rescue), causing their paths to cross with ex-soldier and war criminal Annelida Deal, now a poet calling herself Ona Sudak, and in the course of a three-way running fight in a very peculiar environment, encountering and introducing to the wider world a million-strong fleet of armed, sentient, automated alien warships. These war­ships are known as the white ships, or the Fleet of Knives – which provides a clue as to one of the central concerns of Fleet of Knives.

Fleet of Knives has four major viewpoint characters. Sal Konstanz, Trouble Dog herself, and Ona Sudak will be familiar to readers from Embers of War. “Lucky” Johnny Schultz, small-time merchant captain with an undeserved reputation for luck and smarts, and a flexible moral compass when it comes to salvage and other people’s property, is new to Fleet of Knives. He’s not the most compelling addition – though he and his crew do end up in the kind of interesting danger that the House of Reclamation sends their ships out to rescue people from.

Sal Konstanz doesn’t feel at ease with herself or her surviving crew after the events of Embers of War, though her relationship with Trouble Dog has strengthened and deepened. (Trouble Dog, in her turn, has developed feelings of personal attachment for the individuals in her small crew that are unusual for a warship – even one who acquired a conscience.) But when the House of Reclamation sends her back out to rescue Johnny Schultz and the crew of the Lucy’s Ghost, she gets back into the saddle and goes.

Schultz and his crew have ended up inside a giant alien spacecraft, where they’re being pursued by many-legged, voracious, chitinous horrors which may actually come from another dimension. It doesn’t help that the alien spacecraft is itself pretty weird, and has downloaded the part-human part-machine sentience of the Lucy’s Ghost into the body of a human child. Schultz is, understandably, freaked out, weirded out, out of his depth, and desperately afraid. (Terrified-out-of-his-wits Schultz is a lot more interesting and sympathetic than not-terrified-out-of-his-wits Schultz.)

Meanwhile, Ona Sudak finds herself liberated on the brink of her execution and delivered to the white ships. The white ships have accepted a mandate to prevent large-scale war, and they re­quire the perspective of someone who committed genocide because she thought, at the time, that it was for the best. The Fleet of Knives will prevent another war between interstellar governments by any means necessary – which means destroying human ability to wage war on the extra-planetary scale entirely. Under the strategic direction of Ona Sudak, they set out across human-controlled space.

Eventually this brings them to the same place where Trouble Dog, Sal Konstanz, and her crew are trying to rescue Johnny Schultz. Can Trouble Dog and her crew survive not only the voracious chitinous horrors, but also the white ships and the potential end of interstellar human civilisa­tion? It looks like survival might prove to be a complicated thing.

Fleet of Knives is a fast, entertaining read, a space opera with a lot going for it, including weird and cool aliens and tense space battles, but it’s not as compelling as Embers of War, despite its vastly higher background stakes. (The personal stakes – individual survival – are just as high as they ever were.) That’s down to certain character voices and characterisation choices in this vol­ume. Take Ona Sudak, for example: Sudak was an interesting character when she was still somewhat conflicted about her wartime decisions and what her continued survival during Embers of War meant for her in terms of personal responsibility and ethical choices. A Sudak who has embraced the ongoing necessity of genocidal actions to prevent even more potential future death is a much less compelling character.

Then there’s Johnny Schultz, who’s only inter­esting when he’s nearly being eaten. To be fair, he spends a lot of his part of the narrative narrowly avoiding being eaten, but his arc of personal growth feels unconvincing to me, and his share of the narrative contains a relationship element that I suspect Powell intended to be a romantic arc. Unfortunately, this putative romantic arc has no detectable chemistry. It looks a lot like a reuse of a standard “heterosexual survivors hook up because that’s how narrative conventionally works” trope, rather than because the relationship has been de­veloped in an organic and believable fashion. (It might annoy me less if there were any discernible queer characters in Fleet of Knives, but then, it might not, either. I’m unreasonable that way.)

It’s not that Fleet of Knives is a bad book. It’s decently entertaining and a fast read, and Trouble Dog herself remains a delight. But it would have been a more interesting book (and a tighter, tenser, more compelling one) had it made a handful of different choices.

I still want to know what happens next. 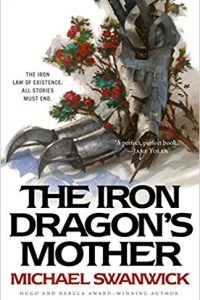