NASA had a plan. A plan that would put people back on the moon by 2028. There we would build a base camp from which we would take the first steps toward landing human beings on Mars. It was a bold plan built on decades of science and experience, and it would have probably taken a few miracles to pull off. NASA, of course, has always been in the business of making miracles happen.

On March 26 of this year, however, the Trump administration made it clear that the bold plan wasn’t bold enough. Vice President Pence, at a meeting of the National Space Council, insisted that we need to have American boots on lunar soil by 2024, four years earlier than NASA’s original target. The reason for this urgency wasn’t immediately clear, although the new benchmark suggests that the White House wants it to happen before the end of the next Presidential term. It does seem significant that the current president is famous for his habit of putting his name in big golden letters on everything he surveys.

Pence’s speech, as perhaps befitting a man of his famed religiosity, was full of fire and brimstone. He suggested that going back to the moon was the only way to stay competitive with China (the fact we got there first, almost exactly fifty years ago, is apparently no longer enough to assure American primacy). Then he ended his speech with what sounded oddly like a threat—aimed at NASA. Although his new plan would utilize existing spacecraft and rockets if possible, “to be clear, we’re not committed to any one contractor. If our current contractors can’t meet this objective, then we’ll find ones who will.”

This was hardly the first time that an American politician suggested that maybe the future of American spaceflight belongs in the for-profit world. Even back in the 1960s much of the Apollo program was built by private aerospace concerns, though under strict operational control from NASA. For years now private companies like Elon Musk’s Space X and Jeff Bezos’ Blue Origin have been helping build and launch the rockets that supply and support the International Space Station in an arrangement that has worked out… pretty well. There have been problems with exploding rockets and mysteriously failing satellites, and no private company has yet been able to put a living human being into space. Yet government excitement for offloading NASA’s duties to private corporations has, if anything, increased. The President has even suggested he’d like to sell the American part of the International Space Station, which has reached the end of its operational lifespan, to the highest bidder. Sadly, there are currently no takers on that offer—maintaining the space station costs billions each year, and there just aren’t that many ways to make quick profits off of aging space hardware. In order to recoup costs, NASA is now offering to lease just parts of the station to anyone who wants it—and to even rent out astronauts for advertising products. The idea that commercial spaceflight companies could take over at least some of NASA’s duties—and deliver services much cheaper than the public sector option—is now deeply baked into all of America’s future space plans.

To be fair, there seem to be serious questions about NASA’s ability to make the new goal on its own. The first launch of the Space Launch System, the massive rocket needed to return Americans to the moon, has just been pushed back… again. This time to a date perhaps as late as June of 2021. It could be years after that before any human being is cleared to ride on top of an SLS, much less travel to the moon. NASA was recently given a multi-billion dollar budget increase to help support the new moon program but it looks like that money may not even cover existing budget overruns. While NASA has no shortage of great ideas about how to get to the moon, crucial elements of mission hardware haven’t even been designed yet. NASA is still debating which contractors will build the space station modules, landing vehicles and robots to be used in the program, and the fights in Congress over budget allocations have already begun.

But if NASA is having trouble getting us to the moon on time, can we trust that the commercial outfits will have better luck? Well, there’s plenty of enthusiasm there. Leading the charge are some of America’s leading innovators and tech gurus. It’s hard to imagine that we would be even talking seriously about landing an astronaut on Mars in the 2030s if not for the élan vital of Elon Musk, who still claims that his Space X corporation is going to do it single-handedly. Jeff Bezos of Amazon just gave a stirring keynote address about humanity’s future living in giant space habitats. As the recent debacle surrounding Musk’s Hyperloop program shows, though, it’s a long walk from enthusiasm to results. Make no mistake, Space X has done incredible things with its unmanned space vehicles, and looks to continue to make great strides. Yet I can’t help wondering—getting people to the moon and then Mars will be the work of decades. What will happen to Space X and Blue Origin once Musk and Bezos retire? The public perception of these companies as space pioneers seems linked directly to the cult of personality around the famed CEOs. Once they’re gone, will the excitement remain? And what happens when the boards of directors of these private sector companies discover the big, dark, open secret of space exploration? Namely, that there’s no easy money in it. While a lot of ink has been spilled about the profitability of mining the asteroids for rare metals, most of what Bezos and Musk want to do involves setting up colonies on other worlds—giant money sinks with no immediate prospect of serious returns on the necessary investments. It’s one thing for a multi-billionaire to talk about spending their fortune on a dream of space, quite another for a group of shareholders more interested in quick profits. How will those shareholders deal with the incredible risks involved in spaceflight, as well? Space X has already lost its first crew-capable vehicle to an explosion in space. Luckily it was just a test run with no one on board. What happens if a privately owned rocket full of astronauts blows up on the launch pad, or even worse—on the south pole of the moon? What would it take for a company to survive the ensuing PR disaster? One can only hope we never need find out. So can we truly expect commercial contractors to solve all the problems necessary to return us to the moon under this accelerated timeline?

Honestly—if you want my personal opinion—no. We can’t. We won’t be going back to the moon by 2024. I just don’t think it’s possible, not without a massive surge in public interest and a real commitment from Congress to spending tens if not hundreds of billions of dollars on getting there. The real question is whether NASA is going to survive this new space race—and what it will look like at the end of the day. A subject perhaps best fit for a science fiction author like me to tackle.

When I set out to write my new novel, The Last Astronaut, I wanted to imagine what NASA would look like in the year 2055, when a huge alien craft reminiscent of ‘Oumuamua enters the solar system headed on a collision course with the Earth. I studied up on the Orion program and NASA’s plans to reach Mars and send astronauts into deep space. I interviewed several actual astronauts about what it was like to work and live in space. The more research I did, however, the more I realized that NASA’s days as the titan of space exploration might be numbered. NASA is entirely dependent on a notoriously fickle Congress for its budget. If commercial concerns really can put people into space cheaper and faster then what purpose would NASA continue to serve? In the end the book became a sort of dystopian take on NASA’s future. In my bleak 2055, Cape Canaveral has sunk into the Florida swamps, a casualty of climate change, and NASA has completely stopped training astronauts, as it no longer has the facilities to launch humans into space. When it turns out we desperately need a few good astronauts after all NASA has no choice but to call back Sally Jansen, the retired commander of an abortive Mars mission, to lead the expedition to the alien object. To make matters worse, she’ll be doing so in direct competition with KSpace, a transnational commercial spaceflight concern, which sees the aliens only as a potential new market ripe for development.

Even in this bleak imaginary future, however, NASA continues to serve a vital function. It continues to send robotic probes to the outer planets of the solar system and beyond—and more importantly, it works tirelessly studying climate change and ways to remediate the effects of sea level rise and coastal flooding. In the real world we desperately need NASA if we’re going to survive the challenges of the next century. I think there will always be a NASA, in some form, even as we assign more and more of its tasks to private companies.

Furthermore, as dire as I may have made it sound here, I think there’s a real future in commercial spaceflight. Space tourism and asteroid mining have the potential to create profits that could spur a new renaissance in space travel. While there are major obstacles in the way of a Space X or a Blue Origin that wants to do everything right now, someone with a more measured approach is going to make a fortune out there—and then we’ll be off to the races.

And I fully believe that we will send people back to the moon, and onward from there to Mars. I’m just not sure how long it will take. Perhaps in this I’m simply jaded, or too pessimistic. Yet this is the story of my life, in a way. As a child growing up in the 1970s and the 1980s, I dreamed of walking on the moon and Mars. In 1980 (I was eight or nine), I sent a letter to NASA asking what it would take to become an astronaut. NASA sent me back a very nice and encouraging form letter, and something even better—a manila envelope full of glossy photographs of rockets and spaceships and giant gray boulders and boot prints in silver soil. I treasured those pictures and kept them with me for years, even as my hopes of journeying to the stars grew ever fainter and farther out of reach. I’ve spoken with children today who have those same dreams, who think Mars is their birthright. Meeting those kids always makes me wonder whether it will be this generation that finally goes back, finally takes the first permanent step out there into space. If not them, then maybe it will be their children, or their children’s children. Part of me wants to warn them not to get their hopes up. A better part of me, though, still wants to encourage them to dream.

David Wellington is the author of twenty-one novels, including the recent science fiction/horror story The Last Astronaut, out now from Orbit Books. He lives and works in New York City. 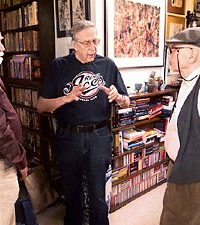