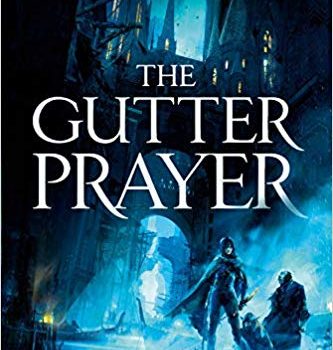 From the first pages of The Gutter Prayer, it’s obvious that Gareth Hanrahan has a background in writing game books. Read­ing it feels like sitting at a table with an especially long-winded dungeon master who is telling his players everything he possibly can about the world they’re moving through, whether it’s interesting or not. After the first 150 pages, the book picks up its own momentum, but reading that far requires patience. The Gutter Prayer emphasizes its world’s politics and religion more strongly than in the usual urban fantasy novel, and that entails chunky paragraphs of exposition on those aspects long before the reader becomes in­vested in the characters navigating these elements.

They’re good characters, though: Carillon, a female rogue from a once-powerful family; Spar, a young man with a terrible illness whose pedi­gree is as significant as Carillon’s, but from the other side of the tracks; and Rat, a supernatural creature in the early stages of transformation from something human into something unspeakably inhuman. The opening sequence of The Gutter Prayer divides these three heroes, and for the rest of the book, they meet and part again repeatedly as they pursue quests both large and small. The stakes of the novel build slowly but significantly, until reality itself seems likely to shatter, should the main quest go awry. Hanrahan capably uses the backgrounds and afflictions of these charac­ters to set up tension and ticking clocks. However, he less capably juggles an enormous cast of char­acters, and the book’s accelerating stakes and pace seem a bit out of its author’s control by the end.

Guerdon, a city as old as Istanbul and as corrupt as Las Vegas, is changing. While the population recovers from the Stone Plague, the Godswar – a sovereign war fought on a massive scale between different sects – rages on outside the city’s borders, and the ruling class attempts to resurrect an old source of power. As a result, Carillon discovers a new ability inside herself, the fruit of a poisonous destiny. Meanwhile, Spar attempts to seize his birthright in opposition to a thief without honor who runs a crime guild. Rat, retreating to the realm of corpse-eating ghouls who live beneath the city, finds himself in a posi­tion of a power he never wanted. All three of these characters reluctantly become world-shakers over the course of the novel, performing a dizzying to-and-fro between friends and enemies, the city above and the city below, the past and the present, the real and the sub-real:

There’s more to Guerdon below than above, in cellars and passageways and dungeons and sewers, in the buried forgotten pasts of the city, and all its unseen arteries and bowels, and more below the city than its inhabitants can imagine. The surface folk are insects crawling on skin.

Similarly, a significant part of this reading experience takes place in subtext. The gods’ pow­ers and pantheons resemble not Judeo-Christian models, but Lovecraftian ones. These gods are horrifying, bloodthirsty, and powerful beyond measure, with totally alien ways of thinking and reasoning. In the mortal realms of Guerdon, the alchemists – makers of technology – have the most power, and chemical weapons are more important than simple guns and knives. The su­pernatural creatures in this book don’t resemble any existing urban fantasy model: Tallowmen, or sentient candles; Stone Men, who gradually transform from flesh into stone; and ghouls, who are a little bit like the ghouls in the Fallout video game, but are mostly something else.

There’s also a sense, by the end of The Gutter Prayer, that this story only clears the decks for a different, larger story, like a prequel. By the final hundred pages, the multiple protagonists feel sometimes like a liability rather than an asset, Rat’s story has gone entirely off the rails, and generally, the stakes have gotten so high that reading feels like a high note held by a piercing soprano voice for an impossibly long time. The dungeon master has evaporated, replaced by an acrobat twirling hula hoops on every appendage. It’s kind of a thrill, but the audience becomes skeptical about how long he can keep it up. Of the book’s 500 pages, much is darkly gory, emotionally unpleasant, or, frankly, skippable. Some aspects are obscure (the true significance of Carillon’s family), while oth­ers are painfully obvious (the relationship between Carillon’s name and her abilities). It’s all a little too much – too elaborate, too bloody, too many pages.

But that’s also an asset. For readers who delight in complex urban fantasy with gods and gore, this book might be ideal. The Gutter Prayer is a difficult, but auspicious, beginning for Hanrahan, and particularly for readers for whom too much isn’t enough. 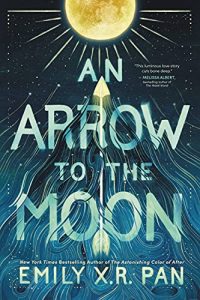 Alex Brown Reviews An Arrow to the Moon by Emily X.R. Pan