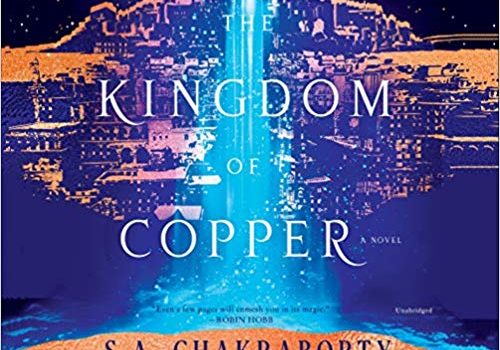 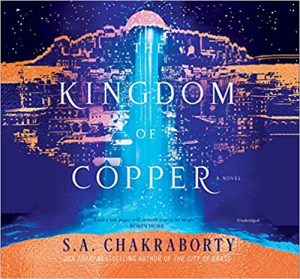 This second in a series picks up five years after The City of Brass, in which Nahri, an orphan from Napoleonic-era Cairo with a magical gift for healing, discovered her true heritage as a Daeva (a tribe of djinn who refuse that name) of the royal line of Daevabad. Forced into marriage with Muntadhir, heir to a rival djinn family who usurped her family’s throne, Nahri seeks purpose in her constricted existence, trying to help the other Daevas, developing her healing talents, and seeking support to build a hospital that will serve djnn as well as the city’s despised shafit, the half-human, half-djinn who face constant threats from the pure-blooded djinn. Daevabad roils with unrest, fueled by old enmities and a lack of money. Matters aren’t helped any by the return of Alizeyd, Muntadhir’s exiled younger brother, who has an inconveniently rigid sense of justice and a fright­ening new set of powers that he gained after being possessed by the Marid (water spirits). Muntadhir believes Ali to be a threat to his throne, not to mention his already rocky marriage, because of Ali’s military prowess and his unacknowledged love for Nahri. Palace politics, rebellious shafit, and a planned invasion by Nahri’s frighteningly ruthless mother Manizheh and Nahri’s beloved Daeva warrior Dara (both of whom she believes to be dead), mean that Daevabad’s upcoming festival is probably not going to be the happy event that most djinn expect it to be.

This is a passionate and delicately textured story, read with matching passion and intelligence by Soneela Nankani. She vanished into the story so completely I didn’t even really focus on how she read male voices or female voices; everything and everyone sounded authentic. Nearly every party in this violent tangle of a series has some redeeming feature, as well as terrible violence in their history, which is why the story just so beautifully awful and real (and clearly draws from contemporary Middle Eastern politics), and why you know that there’s no way that everyone can fulfill their desired goals and will assuredly suffer multiple losses by the end of the book.

I hope so much that Nahri will find her happy ending (and maybe even her unknown father?) in book three, if there’s any way to achieve that while still remaining true to the story as previ­ously set out.