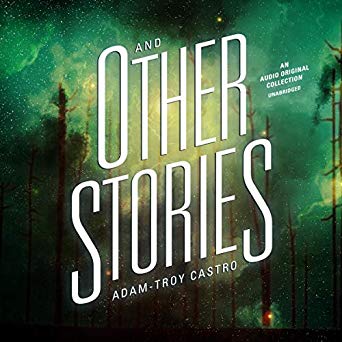 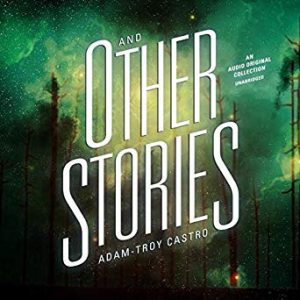 Oh, how I love audio-only (and audio-first) books! It gives my life meaning as an audiobook reviewer. Produced by the excellent Skyboat Media, who were also respon­sible for Jennifer Marie Brissett’s Elysium a few years ago, this horror, science fiction, and fan­tasy collection includes several stories previously available in print, online, and/or podcast. There’s also a story original to the book, “Big Stupe and the Buried Big Glowing Booger”, which grue­somely speculates what would’ve happened if a Texas Chainsaw Massacre-style cannibal family slaughtered Jonathan and Martha Kent and raised the baby Kal-El themselves (hint: he does not grow up to be Superman).

I always find reviewing short story collections difficult, because they’re so hard to summarize as a whole. Thankfully, Castro clearly has some favorite themes. He likes thought experiments/intellectual exercises (e.g., “The Assassin’s Se­cret”; “Four Haunted Houses”). I was particularly chilled by “Survey”, a dialogue-only tale with a college student who participates in a survey to earn some extra cash, only to find herself complicit in several assassinations, as part of a recruiting tool for a shadowy government agency. Castro also enjoys exploring the nature of relationships after one partner has had body modification (in addition to the critically acclaimed, emotionally devastating “Her Husband’s Hands”, we have the spookily psychopathic “Narrow Escape of Zipper Girl” and the comic “The Refrigerator in the Girlfriend”).

Castro himself narrates all of the story introduc­tions, and I enjoyed the verve and self-deprecating humor with which he does. Stefan Rudnicki’s palate-scraping deep voice handles most of the stories, adding solemnity and even a bit of intel­lectual distance to the more grotesque aspects of some stories (particularly, “Red Rain”, a you-are-there, narrated-in-second-person piece in which hundreds of bodies start dropping out of the sky and splattering everywhere). Justine Eyre’s sweet voice adds counterpoint to the production’s longest story, “The Shallow End of the Pool”, a nightmare scenario, lacking any supernatural or sci-fi ele­ments, of a battling couple who are settling their differences via their children, having each raised one sibling from a boy-girl twin pair to fight the other in a gladiatorial combat to the death in the searing Nevada desert heat.

I appreciate that Castro understands how audio can deliver an even greater emotional punch than words on a page; with genuine concern, he tells the prospective driver listening to this audiobook in their car that they may want to pull over before hearing his response to 9/11, “Of a Sweet Slow Dance in the Wake of Temporary Dogs”, in case some of the more brutal imagery will distress them into causing an accident. (No worries in my case; I listen on the subway.)

It’s been a long time since I’ve read any of Cas­tro’s work, and I can see that I’ve been wrong to neglect his uniquely funny, poignant, and chilling take on speculative fiction. This collection is an excellent introduction to all that he has to offer. 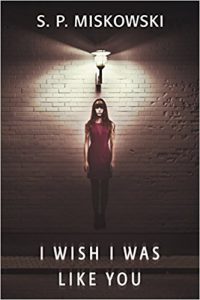 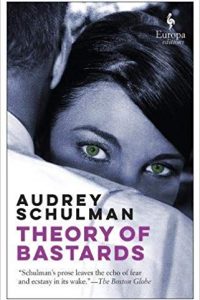