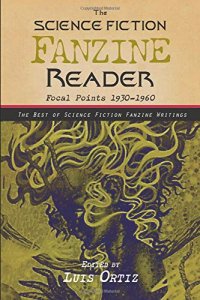 Luis Ortiz is editor and publisher at NonStop Press, which had its origins many years ago as NonStop magazine. He has compiled several valuable studies of various artists of the fantastic — Lee Brown Coye, Ed Emshwiller. Jack Gaughan — and brought us such goodies as the two-volume assemblage of Carol Emshwiller’s short fiction. But with his new book he has surpassed himself. This immensely valuable and entertaining volume — purportedly the first of several — captures for posterity a chronologically delimited slice of the subculture of science-fiction fandom — currently dying or healthy; vanished or extant? — in such a manner that even those folks who have no prior inkling of the subculture — assuming they possess a modicum of curiosity and intelligence — should still be able to completely grok the subject matter and derive amusement and pleasure and wisdom from this richly annotated compilation. Although there have been earlier books which charted some fannish currents and waves — Moskowitz’s The Immortal Storm; Harry Warner’s A Wealth of Fable; Ted Cogswell’s Pitfcs: The Proceedings of the Institute for Twenty-First Century Studies — books which Ortiz acknowledges and cites, there has never, to my knowledge, been a survey like this one which vividly illustrates the topic with actual writing samples, derived from Ortiz’s incisive survey of over four thousand fanzines.

(Readers wishing to see scans of various zines, new and old, and dig deeper for themselves should probably start by visiting Fanac.org or eFanzines or the Rusty Hevlin collection.)

Before looking at the text, I must mention that this book is jampacked with rare illustrations: fanzine cover art and interior art that reproduces well in black-and-white. Almost every other page features an illo or three, which intensifies the vividness of the history.

After Ortiz’s stimulating and concise introduction to the topic, we start with the actual excerpted items — each one of which is backed-up with Ortiz’s factual buttresses. They are almost uniformly in chronological order, except where a later item is talking about an earlier period. Thus a fannish essay from the 1950s that discusses the 1930s would appear embedded with the actual items from the 1930s.

The first hundred pages or so mostly feature self-reflexive essays: i.e., thinkpieces which are concerned with the nature of fanzines and their originators. As pioneers inventing a new medium, the folks involved were naturally given to introspection and analysis and attempts at definitions. And so we get a piece like Allen Glasser’s “History of the Scienceers”, which details Glasser’s involvement in First Fandom. This decision to exclude the types of contemporary articles that might have, say, commented on the latest prose from Ray Cummings or the editorial incapacities of S. Farnsworth Wright succeeds in keeping the spotlight on fandom and fanzines — how hektagraphs worked, for instance. So just be aware that, for the most part, you will not get rehashed literary battles of the day as fought in the pages of these zines, but rather insights into the amateur press people and their publications themselves.

As the fans get more confident about producing fanzines and as traditions are established, the selections change to feature the kind of fanwriting that we now think of as emblematic of this milieu. Its themes are the fannish community itself; and a true community or family it was: small, incestuous, full of strong feelings and idiosyncratic individuals, both positive and negative. We witness its tone and mannerisms, forged one essay at a time, becoming a unique style. Here, for instance is the famous Charles Burbee writing about “femfan” Bjo Trimble.

I do not mean to imply that she is slinky, or wears tight-fitting satin gowns, or smokes Turkish cigarettes in a long jeweled holder, or stands on a shiny dais under a baby spot singing “That Old Black Magic.” She takes over hearts and minds in her own special way which is probably blended with magic because there seems no special reason for her powers.

It naturally came about that one day I met her. She came to my house to a party. She didn’t look like much to me. Maybe 5’1″ tall and no spectacular measurements. Red headed and freckled. Pixie face. She didn’t even seem at ease in my presence.

I must have chuckled silently to myself. I could see at once that I was immune to this one. “After all,” I said to myself, “I am Burbee.” This remark seemed at the time to be quite sensible, complete, and satisfactory. I know now that it was stupid.

Let the others fall for her, I thought. Even Willie Rotsler by this time was hooked on Bjo. He tried to simplify the whole thing by saying that she controlled all the fellows by the use of “thinly-veiled sex promises.” I didn’t give it any thought but assumed idly that maybe this was a good enough explanation.

One day I said to her, “Bjo, make me a thinly veiled sex promise.” She sort of lowered her lids and slunk up to me (well, this time she slunk) and said in a low sexy voice (ever see a sexy pixie?), “That sort of thing works on boys, but for a mature man like you, I’d need something else.”

She left me speechless. Big Mouth Burbee for once had nothing to say. I wonder what the “something else” was.

This book is rife with writing of this sort, as formal and mannered as any sonnet, yet recognizably felt and alive and the output of distinctive souls. The product of its era, perhaps too monocultural and male-centric, it nonetheless embraced surprisingly wide vistas, was full of bonhomie and camaraderie, and of course often fell into the kind of feuding that every set of siblings has experienced. No one could fight the way fans did if they did not all come from the same beloved clan. Gregory Benford contributes one of the essays original to this volume, “Towner Hall, Void, Adolescence, and All That”, which employs mature discernment to analyze the pluses and minuses of such a milieu.

The catalog of famous names is strong: Harry Warner, Walt Willis, Forest J Ackerman, James Blish, Ellison, Silverberg, Ted White, Donald Wollheim, Ray Nelson…. The fine writers who passed through fandom — or inhabited it for a lifetime — are a mark of the pastime’s allure and potency.

And of course we do see a goodly amount of material concerning matters outside or adjacent to the fannish orbit. The Shaver Mystery, geopolitics, racism. Yes, fans of other eras had their Slan tendrils quivering to racial issues as well.

At one point a proud and boastful fanzine editor opines that fandom would continue even if professional science fiction literature vanished overnight. Given the breadth of fannish preoccupations and its eventual self-perpetuating engines, that’s a pretty obvious and safe bet. But the assertion raises the obverse question: would twentieth-century SF as we know it have existed or flourished without fandom? True, individual novels and stories would probably have gotten written in isolation, but would there have been the dynamic feedback cycles that stoked the genre to new heights and refined its toolkit? Such an outcome seems doubtful to me.

And so, in a case of the tail wagging the dog, fandom assumes the role of secret engine at the heart of the literature we love. To understand how the genre arrived at its current destination, it’s necessary to comprehend the fabulous scene that Ortiz lovingly evokes with his invaluable careful curation and contextualization.

Modern fandom is utterly different from its nigh-extinct ancestor. Exploded in size into a thousand niches, it’s media-centric and shamelessly ignorant of its origins. Perhaps this volume will serve as a rediscovery of “All Our Yesterdays” and even point toward future states of fandom.