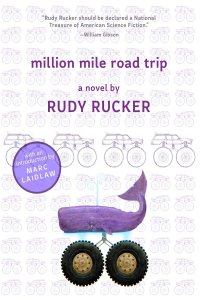 It’s been a highly productive year or so for Rudy Rucker. In August of 2018 he self-published the excellent Return to the Hollow Earth (review here). Now, only nine months later, from his new publisher Night Shade, comes Million Mile Road Trip, along with reissues of nine of his classics. Who says life isn’t good for us confirmed Rucker fans?

What Rucker’s brought to us this go-round is a portal fantasy—or portal SF adventure, to be more exact. A long-established sub-genre—think Lewis Carroll, or even ERB’s Mars books—the portal mode—person transits from native mundane world to a marvelous realm—has fallen somewhat out of favor. Joyless futures or interstellar shoot-em-ups dominate. But the allure of visiting a place sidewise in time and space offer the opportunity to throw all human assumptions—the rulebook that constrains us and which got us into our current mess—out the window, letting the unexpected and surprising reign. Rucker’s contribution has the glorious exalted giddiness of the Mushroom Planet books, or Baum’s Oz saga, or The Phantom Tollbooth, or A Wrinkle in Time, or Have Space Suit—Will Travel.

You’ll note that my above examples are all YA—though I could have mentioned something like de Camp & Pratt’s Incomplete Enchanter books as well—and that’s because the protagonists of Million Mile Road Trip are both high school seniors, lending the book a youthful attitude. And in fact in his stimulating “Afterword,” Rucker cites a moment when he contemplated officially labeling the book YA. But in the end the novel declares and manifests a sophistication and maturity which is not at odds with its juvenile heroes, but which definitely puts it in the “adult reading” niche, however you might define that.

Zoe Snapp and Villy Antwerpen are two outsider pals at Los Perros High School, ready to graduate, unsure of their futures. But then two aliens arrive—Yampa and Pinchley, from Szep—and they convince the pair that their skills are needed to stave off a hideous invasion of saucer people. In true Ruckerian madness, these are not people from a flying saucer, but rather flying-saucer-shaped biological beings who are vampires on smeel, the soul essence of sentience. So unless Zoe and Villy want to see Earth turned into a smeel farm for invaders, they should venture into Mappyworld, make the titular million mile road trip to the city of Szep, acquire a magic wand (living and sapient, natch) and return to battle evil Groon and his saucers. Oh, yes, Villy’s pain-in-the-butt kid brother Scud gets to come along in the souped-up “Purple Whale” car.

Now, this synopsis of the first fifty pages out of nearly five hundred neglects to mention the good work Rucker does establishing all the dynamics among his crew and their families. It sets up the reader for the way the main trio will evolve on their quest, with Zoe and Villy finally becoming lovers. (Particularly enjoyable is the abundant arch and droll dialogue, which shares with Damon Runyon’s talk a larger-than-life hyperreality. In other words, if people don’t actually converse this way, they should!) But the rest of the book will be impossible to encapsulate. Rucker has outdone himself in creating the most bizarre and surreal and overstuffed cosmic ecology of his career. Familiar tropes such as fourth-dimensional travel and “teeping” by slug prosthetic reappear, but the vast majority of the concepts are brand new. And the abundance of alien characters is the richest yet of his oeuvre.

Now, one might imagine that this gonzo environment consists of pure fantasy imaginings. Not so. Rucker adheres to all his own inner logic and sciences. He mentions Thomas Pynchon as an inspiration in his “Afterword,” and it’s useful to recall Pynchon’s comments on the proper assembly of oneiric or surreal works, from his Slow Learner collection.

Having as yet virtually no access to my dream life, I missed the main point of the movement, and became fascinated instead with the simple idea that one could combine inside the same frame elements not normally found together to produce illogical and startling effects. What I had to learn later on was the necessity of managing this procedure with some degree of care and skill: any old combination of details will not do. Spike Jones, Jr., whose father’s orchestral recordings had a deep and indelible effect on me as a child, said once in an interview, “One of the things that people don’t realize about Dad’s kind of music is, when you replace a C-sharp with a gunshot, it has to be a C-sharp gunshot or it sounds awful.”

Rucker nails all the C-sharp gunshots to a tee.

His venue of Mappyworld, a vast (infinite?) plain segregated into unique “basins,” brings to mind a couple of other instances of humanity set loose on worlds with radical geographies: Charles Stross’s Missile Gap and Philip Jose Farmer’s Riverworld series. But perhaps the closest analogue to date is Jack Chalker’s Well World series with its hexagonal construction. In any case, this artificial Big Dumb Object offers a great armature for adventures.

The book ends as vibrant eucatastrophes must: with bravery, courage, resilience and ingenuity facing down peril, greed, hate, and selfishness. Readers will feel that every inch of the million mile road trip was worth it.

Ultimately, I think Rucker has given us the closest thing to a certain iconic Sixties talisman that the world has yet seen. Here’s what tipped me off to his true accomplishment.

The hand-Irav is the size of a turkey, with big heavy fingers. He’s been eating well. He has an eye on the back of his knuckles and a toothy mouth in his palm.

What is this a description of but the Dreadful Flying Glove from Yellow Submarine? Yes, it’s all obvious now. Villy, Zoe and Scud are a three-Beatle band—plying trumpet and guitars form a large part of their resources—and Rucker is Lennon & McCartney rolled up into one.

Maybe the Age of Aquarius has come round again! 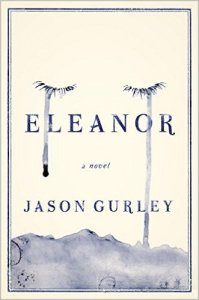