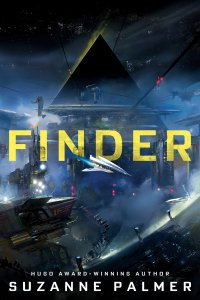 The tropes and tools and furnishings of hardcore classical science fiction, as established and refined over the past hundred years or so, have proven remarkably durable, productive and adaptable. Humans colonizing the galaxy via FTL ships; robots and AIs; aliens; heroes and villains of operatic dimensions; new sciences and technologies; cosmic vistas. The apparatus and favored narrative strategies of such tales seem inexhaustible: ready, with minor adaptations, for each new generation to deploy. Yes, such structures and elements can also be playfully subverted or made postmodern or weirded-out, producing useful boundary-expanding experiments. But somehow the Platonic ideal of such books remains inviolate and eternal.

Suzanne Palmer’s debut novel illustrates this truism with verve, ingenuity, glee and panache. If you imagine one of your favorite Silver Age authors in this vein–Harry Harrison, Andre Norton, Keith Laumer, Christopher Anvil, James Schmitz, John Varley, Gordon Dickson, Le Guin of the early Hainish novels–and mentally update them to current writing standards and practices, you’ll have a good sense of her book. A generation or two ago, when just starting out, C.J. Cherryh would have been doing something similar, and today Palmer has peers in folks like James Cambias, Jack McDevitt, and Julie Czerneda.

As with Harrison’s Stainless Steel Rat, our hero is a lovable but incontestably dangerous rogue: a “finder” or interstellar “repo man” named Fergus Ferguson. Palmer’s portrait of him is exciting, convincing, alluring, and full of real humanity. Fergus’s rich backstory — born on Earth; spent much time on Mars, where he became an accidental hero; now basically homeless (“My home consists of bags half forgotten in long-term rent-a-lockers in spaceports here and there, scattered across a dozen worlds.”) — grabs our sympathy and attention. This is essential, since he’s in every scene and our embrace of him is crucial.

His current task seems simple: reclaim a stolen spaceship named Venetia’s Sword. The craft was taken for a one-way “test drive” by one Arum Gilger. Gilger turns out to be a crime boss-cum-warlord in a strange place: the realm of Cernekan. Cernekan is a loose assemblage of colonized rocks and vacuum habitats, all linked by a physical network of transport cables and power cables. (Resonance with Karl Schroeder’s Virga series come to mind.)

The book opens with Fergus riding a transport pod with one other passenger, an older woman who turns out to be a certain Mother Vahn. The pod comes under attack: Gilger has a grudge and crusade against the Vahns. Mother V. dies, and Fergus, barely surviving, winds up at the Vahn colony, which appears to be populated by clones of the matriarch. One of them, Mari, is instantly suspicious of Fergus and hostile to him, suspecting him of being allied with Gilger. But Fergus convinces the family of his real mission, and they offer him some support. Mari is the designated representative of the clan, and her wry frenemy interplay with Fergus forms a large and solid armature for the rest of the book. Leave it to Palmer not to succumb to cliché, for she never gives us the stereotypical reluctant romance that we half-expect to evolve between the characters.

Fergus now must navigate the bizarre politics, physical environments, and customs of Cernekan, seeking to achieve his goals while being mortally threatened. Palmer puts him and Mari through one ingenious dangerous escapade after another, rendering the space environments tactile and making the large cast of nonpareil personages as strange yet familiar as our own variegated family members. Conditions in Cernekan devolve into war, and Fergus and Mari have to make a side trip to Mars.

But here’s the massive complication: Cernekan has long been subject to mysterious surveillance-only intrusions by enigmatic aliens known as the Asiig. True, once in a while they do kidnap a human, and some they release, memory-wiped but changed. This happens to Fergus, and his adventures afterward — including a return to Cernekan — assume a more cosmic angle.

Palmer tells a fluid, funny, thrilling tale with no longueurs. The humor is organically derived from character and situation, never forced. The fight scenes and feats of derring-do might recall hard-edged passages from Richard Morgan. And there’s a kind of Hitchcockian North by Northwest feel to the way fate and misunderstandings impel Fergus’s actions. But aside from SFnal wonders, certainly half the charm and power of the book lie in the authentic human dynamics, especially visible during the eventual separation of Mari and Fergus.

The novel concludes in an entirely satisfactory manner that leaves open the possibility for more adventures with Fergus. I can easily envision a Guardians of the Galaxy-level franchise here. After all, this is a hero who takes time to replace his destroyed lucky tee-shirt with a local one. “Who knew? Maybe Bil’s Bugrot Firebowl would be his new lucky shirt.”

I think Finder will serve as a similar talisman and touchstone for future generations of lucky readers. 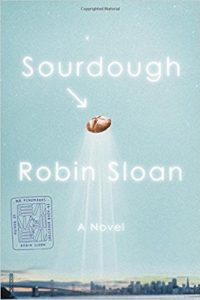 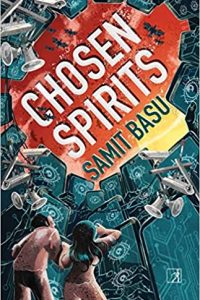