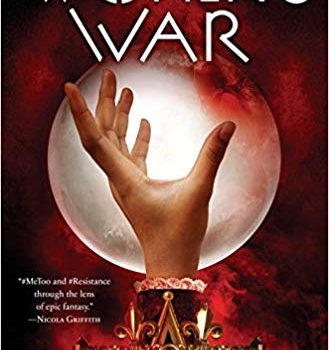 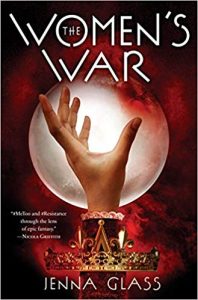 I wish I felt that The Women’s War was doing more interesting work. According to Jenna Glass’s bio, she’s published more than 20 books under a variety of different names. The pseudonym is sufficiently open to identify at least one of those names: Jenna Black, author of urban fantasy and paranormal romance. I’ve never read any of her books before, but based on The Women’s War, they’re almost certainly competent, but unlikely to be tremendously innovative. The Women’s War may be an enjoyable read (aside from all the rape and murder), but it’s a story whose general shape I’ve encountered several times before.

The Women’s War represents, according to Glass’s bio, her first foray into epic fantasy. It’s the opening shot in a longer series, and I suspect it’s going to be a trilogy. The Women’s War feels like a trilogy-opener. It also feels like a feminist fantasy novel from the 1980s, but less diverse and less thematically sharp and pointed than many of the feminist fantasy novels from that decade. It’s a book which shows us a society with a pronounced division in status and legal rights between men and women, but one which does not show us any queer people or any trans people, whose perspectives on (and existence in) such a visibly divided society could have done interesting work to complicate The Women’s War‘s binary view of gender and reproduction.

In kingdoms of The Women’s War, women – which the novel understands as cis women – are at best second-class citizens, and at worst property, vessels for the getting of male heirs. Men (cis men) can divorce women at will, and divorced women are relegated to an institution known as the “Abbey of the Unwanted,” controlled by the crown, where they are required to prostitute themselves to bring in revenue and work at craft­ing charms and potions. Only in the Abbeys of the Unwanted are women allowed, indeed forced, to perform magic. Magic is the province of men, and any woman caught practicing magic outside the Abbeys is condemned to the local Abbey. (Though, at least in the Abbey, they have access to birth control, so one wonders how the population succeeds in reproducing itself.)

The worldbuilding set up here seems rather like (as a friend of mine put it to me) the Men’s Rights Activists proposed plan for society. But then the divorced wife of a king – an abbess in the Abbey of the Unwanted – performs a spell planned by generations of abbesses before her. This spell al­lows all women to control their own fertility. Now they can’t become pregnant unless they want to, of their own free uncoerced will, want to in their secret innermost hearts. (Although does anyone ever want something wholly, without reserva­tions? I wonder.) The spell takes the abbess’s life, but she publishes the intended consequences of her spell widely first.

There are also, of course, unintended conse­quences. These include the creation of a new magical element, visible to all women but only some men, which is produced when a woman is raped and can be used by that woman to avenge herself on a man – but more on that later.

Alysoon Rai-Brynna is the daughter of a king and his ex-wife – the abbess who performed the spell. A widow with two children of her own – a daughter of marriageable age and a young son – she has a good relationship with her full brother and an awkward relationship with her father. Said father is a decent king, which makes him not a very nice man – but he’s a much better man than his heir, the crown prince Delnamel, who already hated Alys and her brother even before their mother’s spell gave him a reason to accuse them of treason.

Ellinsoltah of Rhozinolm is a young woman who has just inherited the crown of her country in default of any clear male heir. (If either of the two possible male heirs took the throne, the other would immediately rebel.) Her council and her country expect her to marry relatively quickly and pass the throne to her husband, but Ellin is beginning to understand her power – and to want to be able to use it.

When the inmates of the Abbey of the Un­wanted, with their new abbess Chanlix, are exiled to the edge of a desert under the guard of Alys’s full brother Tynthanal, they’re meant to suffer and perhaps even die. Instead, they discover a well of magical power, producing largely elements that largely only women can see. Because Tynthanal and his troops are decent men, they begin to thrive instead.

In the city, Delnamel is using the marriage of Alys’s daughter as a weapon against her. Alys is driven to follow Tynthanal in the hopes that she will be able to protect herself and her children in his company. When their father dies and Delnamel in­herits the throne, Alys’s hopes for safety are dashed. Instead, she and the inmates of the Abbey – and Tynthanal – will have to fight for their freedom. One of her new hopes is an alliance with Queen Ellin.

I want to return to the “creation of a new magical element” which I mentioned earlier, because this is at the centre of the recurring rape-revenge narrative that undergirds a certain proportion of the novel. There are several uses of this element to render men – including a sadistic rapist – impotent, with the idea that this will protect other women from their attentions. I’m rather annoyed at the novel in this respect, because most rape is about power rather than sex, and impotent rapists (I am given to understand by some studies) tend to compensate by becoming more violent. Rape is not limited to the use of a penis, either – but the tacit assumption that it is seems to be part and parcel of the novel’s rather binary view of sex and gender.

This binary view is one of the reasons I find my­self not particularly in sympathy with the novel’s “feminist” approach. Particularly as the majority of prominent male characters are either fully on board with female power and equality or are the kind of entitled, eternally self-justifying assholes who’d be bad news regardless of gender. These individual assholes are such terrible people – Delnamel, whose weak moral centre and perpetual selfishness, for example, make him a figure of rather pathetic evil – that their terribleness obscures any sustained critique of the system that upholds their power.

I can’t help feeling that the novel uses rape as a tool of voyeuristic shock, a way to say “these men are bad men,” without balancing that with equal consideration for the survivors. It seems to me that the novel’s whole social system vis-à-vis women is similarly invested in that quasi-voyeuristic titillating shock, the oh-god-that’s-so-awful, without dwelling on the consequences.

The Women’s War is full of interesting charac­ters. It’s entertainingly written, and builds its tension neatly and competently towards the violent confron­tations of its climax. It’s a worthy epic fantasy, and is definitely in conversation with the angry feminist works of the 1970s and early 1980s. But it leaves me more disappointed than satisfied: its feminist approach is simplistic and old-fashioned, and its virtues, for me, don’t make up for its flaws.