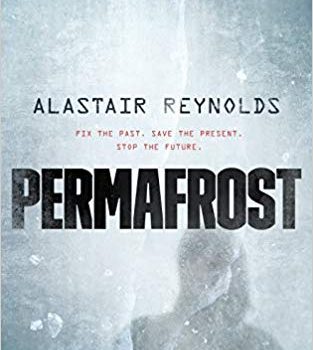 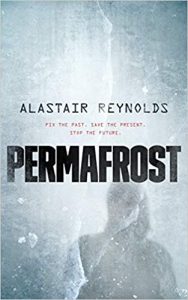 Alastair Reynolds is one of a handful of authors writing science fiction today who can boast of having worked for a space agency as a scientist (as part of the European Space Research and Technology Centre). His long-form fiction has tended towards far-future science fiction, space operas with sprawling future histories and a strong interest in the influence of technology on what it means to be human. This makes his latest, novella Permafrost, rather a departure.

Permafrost is brief – clocking in at under 180-pages long in the paper version – and elegant. Instead of setting itself in the far future, its furthest future date is 2080. It’s a 2080 staring down the barrel of human extinction through widespread global malnutrition: a very short future history, in contrast to Reynolds’s usual fare. It’s a time-travel story – but time travel in a very limited sense. A group of scientists and engineers have gathered at the edge of the Arctic Circle, in far-northern Russia, in a last-ditch effort to change the trajectory of humanity’s rapidly ending future. They need to make a tiny change to the past, in order to give humanity a chance for continued existence – a change so tiny that it leaves history sufficiently intact for them to avoid the problem of paradoxes. One of their recruits for carrying out this time-travel operation is Valentina Lidova, a septuagenarian schoolteacher and the daughter of the groundbreaking mathematician, Luda Lidova, whose work on the mathematics of paradox laid the basis for this time-travel project.

In order to achieve effective time travel, Valen­tina’s consciousness will be injected back across the past into the body of a young woman in 2028. (She is among one of several “pilots” attempt­ing to carry out the project, but she’s the one for whom consciousness transfer works first.) Once there, she’ll be able to take control of that young woman, and fulfill the goals of the project – seeds for the future. Provided nothing goes wrong with this experimental, desperate, never-been-tested technology.

The first line of the novella – “After I shot Vikram, we put our things in the car and drove to the airstrip” – makes it clear that things haven’t all gone according to plan, although the reader doesn’t understand that until later.

Reynolds treats us to an elegantly tense nar­rative, opening in the middle – the moment that would, in a less interestingly constructed story, be the lead-up to the climax – and working both forward and back. This non-linear treatment of narrative feels appropriate for a time-travel novel, and Reynolds wields it to good effect, building our picture of the characters and the world, and the story’s events, in snapshots and scenes designed to whet narrative tension to a knife edge. Noth­ing less than the survival of the human species is at stake.

Valentina is an interesting character, a woman old enough to remember when the human species had a future, who chose to spend her time educating a doomed generation. She also remembers how her mother’s research into the mathematics of time travel blighted her own youth – but that research is now the only thing that could save humanity.

Reynolds’s treatment of time travel and paradox is, in my experience of science fiction, novel. He offers us a postulate of a single timeline, but one to which alterations could be made, altera­tions that create paradoxes that cause “noise” for anyone attempting to alter the timeline, and which eventually superpose the condition in which the paradox-creating intervention occurred over the condition in which it did not, so that to an observer that condition always occurred. But for a brief period, the conditions exist in parallel, so that an observer can remember both of them. Too much paradox noise renders it impossible to target interventions in the timeline. This is one of the few time-travel stories where I don’t feel that the existence of paradox has cheated me of a satisfying narrative experience.

This is an enjoyable, engaging, and thought-provoking novella, and one whose conclusion leaves room for ambiguity. I admire it. And if you like precise, elegant, nail-bitingly tense science fiction, I recommend it. 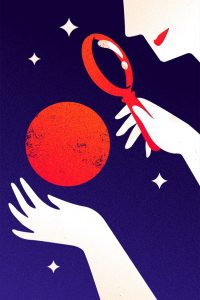