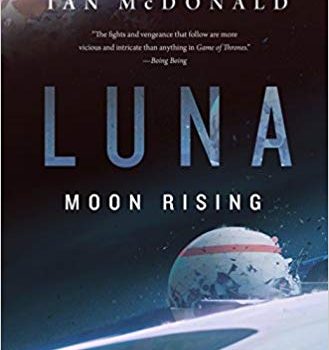 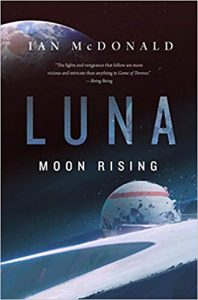 I’ve long advocated to anyone who’ll listen (generally myself in the shower) that books in a trilogy or multi-volume series need to begin with a recap of the previous novel. The expectation that I’ll either remember the many plot threads and character arcs or reread the previous instalments is wishful thinking given my sketchy middle-aged memory and the many shiny new novels that are published every week. I mention this because, as much as I loved the first two books in Ian McDonald’s Luna series, when I started the latest (and final) chapter, Luna: Moon Rising, I only had the vaguest inkling as to who was who, and what was going on. To re-accustom myself with the five Dragons, the founding families that colonised the Moon and now supply Earth with resources, technology and energy, I leant heavily on the next best thing to a recap, the Dramatis Personae. This allowed me to differentiate between Duncan, Darius, and Denny Mackenzie, figure out who Alexia Corta was, and untangle the byzantine, regularly violent relationships between the Dragons.

If you’ve read the previous two books, you’ll know that the series predominantly centres on the fortunes of the Corta family. The tumultuous events that shake the moon (sometimes liter­ally) all stem back 50 years to Adriana Corta’s discovery of Helium-3, which sees the Corta family leap-frog the other Dragons in terms of power and influence. However, by the end of the first book, the fantastic Luna: New Moon, Adriana is dead and her Company, Corta Helio, is in ruins, violently acquired by the Mackenzie family. Lucas Corta, eldest son and the once Managing Director of Corta Helio, presumed murdered at the hands of his wife (long story, no time to explain), makes a desperate bid to save his mother’s Company. He heads back to Earth, a journey that should be fatal, given the effects of low gravity on his body; however, he survives and makes a stunning return at the climax of Luna: Wolf Moon. With the support of the shady Luna Mandate Authority (LMA), he overthrows the government and takes on the mantel as “Eagle of the Moon.” When Luna: Moon Rising opens, we discover that Lucas, now in a position of power, faces threats on a number of fronts. There’s the LMA, who have their own dark designs for the moon, there’s the Mackenzies, who are more than up for the fight, and in the shadows there’s the Taiyang Corporation, headed by Lady Sun, who have been playing a long game of their own. If things aren’t complicated enough, Lucas faces a custody battle over his 18-year-old son Lucasinho Corta, who, in fleeing the Mackenzies with his nine-year-old cousin Lorna, suffered hypoxia and is now in a vegetative state.

Since before the publication of the first book, McDonald’s trilogy (initially a duology) has been compared to Game of Thrones, just set on the Moon. That’s fair enough. Like Game of Thrones, the series has powerful families in conflict, their fight for dominance punctuated by grotesque acts of brutality. McDonald, to his credit, dials back on the sexual violence, but he still knows how to write a kinky, if cringe-worthy, sex scene. It’s no surprise then that back in 2015 TV rights were snapped up (though things have gone quiet since). Yet, by only focussing on the back-stabbing, re­venge plots, and gob-smacking twists it’s easy to look past how these books – and especially Luna: Moon Rising – chart out a possible future for our species. As with Luna: Wolf Moon, Luna: Moon Rising is set partly on Earth, and through the eyes of Marina, a once-resident of the Moon who returned home to be with her sick mother, we see how governments across the world have become dependent on what the lunar surface provides. The Moon is also a handy scapegoat when things go wrong, when economies collapse and the effects of climate change further diminish resources. For Lucas, who has briefly witnessed the slow, escalating decline of the planet, Lady Luna holds the next step in human evolution: “This world [the moon] is a laboratory, where humans experiment in cultures and societies and philosophies. New politics, new religions. To the end of creating something that will endure.”

Yes, the cinematic set-pieces, the reversals in fortune, and the awful sex are a large part of what makes the Luna: New Moon trilogy so much fun to read, and why I will miss it now it has come to an end. Ultimately, though, these entertaining, and intelligent novels, capped off by the very satisfying Luna: Moon Rising, have been about establishing a society, a community, a family that looks to the future, that lives and prospers in an environment that must always be treated with respect. 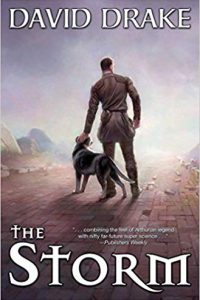