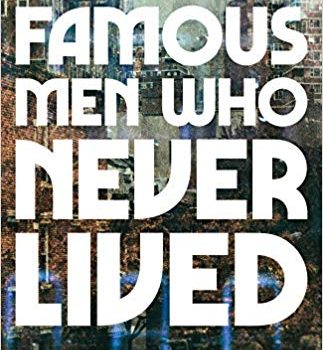 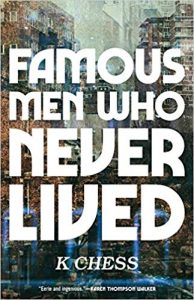 Over the last couple of years, there’s been a wave of debut authors from outside the field putting a fresh twist on genre staples. In An Unkindness of Ghosts, Rivers Solomon explored slavery, race, and gender on a generation starship; Ling Ma’s Severance employed an apocalyptic killer-flu to critique and satirise late-stage capitalism; and Kate Mascarenhas, with The Psychology of Time Travel, side-stepped time-wimey clichés to consider the psychological impacts of travel­ling through time. K Chess continues this trend with Famous Men Who Never Lived, a take on parallel realities that substitutes the traditional multiple world hijinks, what-ifs, and evil twins with something more nuanced, more in touch with the current political moment.

Hel (Helen) and her partner Vikram are refu­gees from a United States that’s been devastated by nuclear war. Along with 156,000 people, they have journeyed through a Gate linking their reality to our New York. At first their sudden appearance, “stepping dazed into the spaces between the grave markers of Calvary Cemetery in Queens,” is met with shock, compassion, and intense curiosity, “the scientifically inclined and the religious… equally fascinated by this miraculous proof of the existence of a version of creation other than the one they knew.” Three years later, the novelty has worn off. The cost of feeding, housing, and integrating these Universally Displaced People (UDP) has marked them as pariahs, unwanted aliens. “The newcomers, whose reality had betrayed them. Here they all were, crash-landed. Resented and resentful.” Hel, in particular, has struggled to cope with the paradox of living in a New York so recognisable, yet so radically differ­ent. However, she discovers a sense of purpose when, in Brooklyn, she visits the house of Ezra Sleight, an influential, pivotal writer in her own reality who died as a ten-year-old in ours. Hel believes that Sleight’s death in 1909 is the point of divergence between the two timelines, and she makes it her mission to transform Sleight’s never-was-house into a museum “dedicated to those who never existed.” Seeking funding, Hel turns to New York’s art-community, but when the only copy of Sleight’s most famous novel, The Pyronauts, goes missing, possibly stolen, Hel’s need to recover the book becomes a dangerous obsession.

I initially struggled to find the rhythm of Famous Men Who Never Lived. I thought it was because of the book’s tone, an atmosphere weighed down by misery and despair, but I soon realised that what was holding me back was the baggage I’d brought to the story. As I noted above, I knew going in that Famous Men Who Never Lived wasn’t going to be a romp across multiple realities, and yet I did expect the stakes to be higher. On that rare occasion when it looks like the narrative is about to move into another gear, Chess takes her foot off the gas. For example, there’s a plot thread where Vikram, a once-academic and expert in Sleight now guarding a storage ware­house, sees a blue light, similar to the glow emit­ted by the Gate, “escaping from one of the units on the third floor.” Like Vikram, you immediately consider a number of possibilities: has someone re-opened the link between the two timelines, or is this evidence that other parallel realities have access to the Gate? The truth, though, is so much smaller and melancholy.

I’m aware that reviewers, including myself, have this tendency to critique the book they wished the author had written. That isn’t the case here because I re-calibrated my expectations as I read the novel. I began to appreciate not just how nuanced, smart, and intimate this book was, but how Chess had recognised that baked into the parallel world concept was a sense of dislocation and isolation. With that in mind, she switches the perspective, instead of the protagonists being dumped into a timeline where Kennedy wasn’t assassinated, or the Nazis won the Second World War, Chess asks us to see our reality from the point of view of the “other.” This subtle but almost radical change to the traditional multiple-world narrative allows Chess to write about the poor treatment of refugees who struggle to as­similate the moment they arrive. What brings this home are the stories collected for the museum, interspersed across the novel, different voices describing the journey between the worlds, the horror, tragedy, and guilt of knowing those left behind will die, but also the stark reality of liv­ing in a place that’s recognisable, that’s safe, but that just isn’t home. There are parts of this novel that didn’t work for me – I wasn’t invested in the multiple excerpts from The Pyronauts – but it’s a minor complaint. The strength of Famous Men Who Never Lived is in eschewing the big set-pieces, the cinematic moments for something small-scale, personal, and heart-felt. 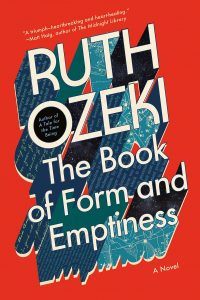