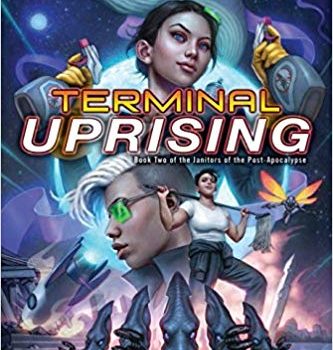 Marion “Mops” Adamopoulos and her Hygiene and Sanitation Services team take their stolen ship, the EMCS Pufferfish, on a mission to Earth in this second book in the Janitors of the Post-Apocalypse series. In this future, the humans of Earth have all been reduced to zombie-like ferals, but some, like Mops and her crew, have been recovered and made more aware by the alien Krakau, who give the humans work as soldiers and spaceship crew – except that turned out to be a lie; it was the Krakau who acciden­tally gave the humans the disease in the first place. Now Mops is following a rumor that an actual cure for the plague has been found on Earth, only it turns out some Krakau don’t want to lose their supply of nearly unkillable human soldiers. There’s not quite as much sanitation-based humor this time out, but an enemy alien lawyer also provides some laughs. It’s all good fun, with the exploration of Earth offering lots of adventure and some touching moments to go with the entertainingly offbeat combat that explores the deadly side of cleaning supplies. 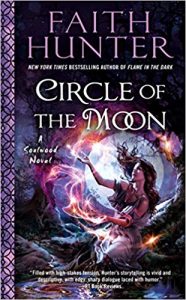 This fourth volume in the Soulwood series finds the PsyLED team trying to figure out who’s casting spells involving blood sacrifice, which have strange effects on local vampires and Nell’s boss, the wereleopard Rick LaFleur. Black magic is definitely involved, but the lo­cal witches refuse to get involved. Meanwhile, Nell’s personal life is getting too complicated; her plans to take in her little sister and her tenta­tive romance with the werecat Occam keep get­ting sidetracked by all the danger; worst, Nell’s powers keep growing, and she’s having trouble keeping some of the new developments from the team. Things get a little over-complicated and over-the-top; Nell’s pulling off some amazing stuff, but she’s so ignorant of her abilities it’s not always convincing. Still, it’s a heck of a lot of fun, a neat mix of the supernatural and a police procedural.