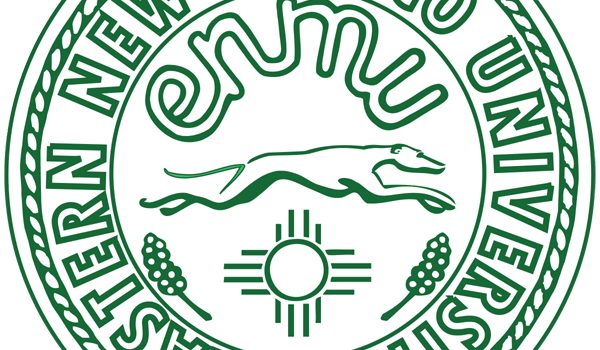 “We’re living in a time of walls,” said filmmaker Alex Rivera when introducing Sleep Dealer at the start of the 43rd Williamson Lectureship April 4-6, 2019 in Portales NM. “It’s a global obsession. How do we tell stories in such a world? In my film, I try to cross the consciousness of walls by looking at them, through them, and beyond them.”

Trans-border fantasies and nightmares were timely subjects for the Lectureship, held to honor SF pioneer Jack Williamson at Eastern NM University. Rivera, a digital media artist and winner of multiple awards at the Sundance Film Festival and the Berlin International Film Festival, was guest of honor, and Connie Willis served as toastmistress. Having a filmmaker as guest of honor was a change for the Lectureship, but Sleep Dealer is considered a fundamental work in “Border Science Fiction,” with a Mexican man remotely working from a Tijuana factory on an American construction site through a robot.

Criminalist Cordelia Willis started off events with a talk on “Forensic Genealogy,” about “DNA testing to solve crimes, including the new practice of searching public genealogy bases.” A large dinner gathering at a local steakhouse finished out the first day after Rivera’s film screening and reception.

Friday morning’s group breakfast for 24 was fol­lowed by a presentation by Rivera, which included his short films Why Cybraceros? (based on a late 1940s agricultural promo film), A Robot Walks into a Bar (commissioned by PBS in 2014), and a clip from his first short film, a biographical fantasy entitled Papapapá from 1995.

“When I started making films in the mid ’90s, I realized my father mostly watched TV in Spanish even though we were in upstate New York,” Rivera said. “For my father, TV was a transport to his childhood Peru home and language. It wasn’t here or there really, but almost a third location – a virtual location. I started to have this idea of the alienation that would come to exist from working remotely.”

PBS asked filmmakers to tell a story about the future, but to not make it too dark. Rivera’s film A Robot Walks into a Bar is an attempt to play with Asimov’s Three Laws, when a robot is hired to be a bartender. “If a robot cannot do any harm, it really can’t do anything,” said Rivera. “Especially if it perceives any emotional hurt as counting against the First Law.”

Asked about his influences, Rivera said Star Wars was a religious experience for him. He also cited the works of Neal Stephenson and Joe Haldeman, and named Guillermo Lavin’s “Reaching the Shore” as a recent story with impact.

Lectureship organizer Patrice Caldwell welcomed 90 people to Friday’s luncheon and introduced Connie Willis. Willis introduced Rivera quickly by noting that Vanity Fair called him one of 10 directors to watch, that he had won the Gotham and Independent Spirits Awards, and that Sleep Dealer is being developed as a possible TV series.

Rivera noted, “We’re living in a duality of connectivity and division. We’re connected by technology and the internet, but more walls are being built. People are divided by countries, cultures, and so on. The disembodied worker – remotely controlling drones or robots – is a metaphor for this connectivity and division. The border and the exchange between north and south are my calling, and that theme runs through my work.

“Images become international, and can be used as shorthand in communication. Cell phones were developed at Motorola by a scientist who was impressed by Star Trek‘s communicators, and Jack Williamson’s ‘terraforming’ now is being discussed by scientists, NASA, and future colonists.”

Rivera wrapped up his address, saying, “Technology is changing so quickly that we need a place to take a moment and reflect. Science fiction provides that place. Sometimes real life is too much.”

Willis said she was thinking of Williamson and “how kind, witty and wise he was. He shared his wisdom with so many people, both in and out of science fiction.” She said she had no wisdom to offer but could share a few things she’s learned over the years, such as to never take a cruise based on what has befallen ships in just the last six months; not to believe everything you see on the internet, including scientists discovering a colony of flying penguins, the announcement of a Burger King Chocolate Whopper, or Amazon adding a service that delivers your favorite author to your door; and not to open your door to cows because a small village in England has had the bovines going door to door.

She finished by listing Williamson’s many accomplishments, from coming to New Mexico in a covered wagon, to being invited by NASA to watch a flyby of the shuttle, and inventing the words terraforming, androids, psionic, and genetic engineering. She finished with a short section from Williamson’s story, “Space Family Smiths”, which ends with a line that is a “great message in these times” and sums up his optimism: “Trust yourselves, and fine things will happen.”

After lunch, there was a tabletop gaming session organized by students, and tours of the renovated Williamson Special Collections in the Golden Student Suc­cess Center. Attendees noted the many boxes around cubicles and against walls as librarians attempted to find room for everything in the smaller space they’d been given. Some participants thanked Melveta Walker, director of Golden Library, for the 11 feet she was able to get added back to the Special Collections space.

At the afternoon panels, attendees watched discus­sions on “Lights, Camera, Aliens! Aliens in Film and TV” with Patricia Rogers, Connie Willis, and Steven Gould, in which the participants talked about aliens as symbol (Close Encounters of the Third Kind, Avatar, The Invaders), aliens as refugees (Alien Nation, Ro­swell, District 9), and aliens as the inexplicable (Arrival). In “Show Me the Money! Writing for Fun and Profit” with Lauren C. Teffeau, Joan Saberhagen, Emily Mah, Darynda Jones, and Walter Jon Williams, Williams said, “Rule number one is that money should flow to the au­thor. If you’re paying, something is wrong.” Saberhagen added, “Anyone who can spend their life doing what they want and not starve has a blessed life.”

“The Other in SF/Fantasy: Something Different This Way Comes” panel included Connie Willis, Cordelia Willis, Sarena Ulibarri, and moderator Barbara Senn of ENMU, in which they talked about how science fiction and fantasy, while built on aliens, wizards, and such, have struggled with human diversity.

The “Trends in SF YA” panel featured Teffeau, Mah, Jones, and moderator David Sweeten of ENMU talking about where young adult science fiction and fantasy are headed.

Teffeau, Williams, Courtney Willis, Jones, Gould, and moderator Caldwell were on the “She Blinded Me with Science: Some Science for Your Science Fiction” panel, addressing scientific concepts that are all-time favorites in fiction, and what might be coming next. Courtney Willis noted, “I don’t think we need to worry about the humanoid robots as much as the ones we carry around, such as Alexa and smart phones.” Across from that, Cordelia Willis and S.E. Burr debated “Hogwart’s Revenge: Harry Potter v. Lord of the Rings”, where Burr noted, “The magic systems are completely different. In Lord of the Rings, we don’t always know how the magic works, and in Harry Potter they are learning how to use the magic.” Cordelia Willis noted that Lord of the Rings is responsible for her very existence. “My mother was going to break off the engagement to my father. He was in Connecticut and she didn’t want to do it long distance. Well, she needed a book to read on the cross-country flight and she picked up The Fellowship of the Ring. She was so excited by the book that she read it the whole trip, and later realized she had forgotten to do the break-up.”

Friday evening’s dinner party was held at Gene Bundy and Geni Flores’s home. About 35 people chatted and visited, while enjoying food and drinks.

Saturday’s group breakfast was followed by a writers’ workshop by Connie Willis. Twenty-two students and SF fans listened as Willis advised, “You have to figure out whose story you’re telling. It’s not always the person you think it is. It has to be a character with a lot at stake, someone who has to change.” She talked about how hard the actual writing process can be, about how dialog can be used for information and story exposition, and that the best way to learn to write is to read a ton, watch a lot of movies/TV, and write a ton. She concluded, “Write what you’re interested in. Do not write for trends, the next big thing, or what you think will sell. Focus on your passion and your unique perspective.”

Saturday afternoon finished out the Lectureship with lunch, varied conversa­tions and good-byes. Plans for April 2020’s Lectureship soon will be underway, including a guest of honor announcement for the 44th Lectureship.

This report and more like it in the May 2019 issue of Locus.