She co-edited feminist SF anthology Aurora: Beyond Equality (1976) with Susan J. Anderson, and edited Nebula Awards Showcase 2004 (2004). She also wrote numerous Star Trek tie-ins in the 1980s, and one Star Wars novel in the ’90s.

Vonda Neel McIntyre was born August 28, 1948 in Louisville KY. She lived on the east coast and in the Netherlands before her family settled in Seattle in the 1960s. She attended the University of Washington, graduating with a BS in biology in 1970, and studied genetics in graduate school there. She helped found the Clarion West Writers Workshop in Seattle in 1971, and remained involved with the workshop in various capacities throughout her life. More recently she founded ebook publishing collective Book View Café.

McIntyre was diagnosed with metastatic pancreatic cancer in February 2019 and entered hospice care soon after. 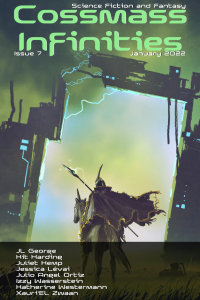