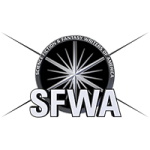 The Science Fiction & Fantasy Writers of America Board released a statement March 1, 2019 in response to allegations that a Facebook group devoted to self-publishing, “20Booksto50k,” may have promoted slate voting to influence this year’s ballot, a situation that drew sometimes heated responses from authors troubled by the issue. The statement reads, in part:

In light of recent events regarding the 2018 SFWA Nebula Nominations short list, the SFWA Board is aware of the ongoing issues. We will continue discussion on ways to improve our processes so that something of this nature does not happen again. With that said, we would like to make it clear that the organization frowns on any attempt to manipulate our Nebula Awards nomination and final ballot processes which includes logrolling and slate campaigns. In our ongoing dialogue, the SFWA Board will be working in concert with the Nebula Awards Commissioner and the Nebula Rules Committee to strengthen existing rules and guidelines to safeguard the integrity of the awards. We also do not condone abusive behavior in response to the stress of this situation.

SFWA began admitting “independent and small press writers,” including authors who self-publish, into the organization in 2013. “Since then, we’ve welcomed hundreds of new independent, traditional, and hybrid authors…. We also understand that with growth such as this, sometimes comes the pain of finding our way forward. The recent controversy is no exception, and we fully understand just how frustrating something like this can be.” The Board and staff “regrets the shadow that has gathered over what we’ve all worked so hard to build…. our largest concern will be focused on the careful repair of the rifts that have opened and how we can avoid something like this in the future. Above all else, we hope we can move forward with our ongoing vision to make this organization into everything it can be.” They ask that voters judge each work on the ballot on its merits: “The work that stays with you, that moves you, that work that you love the most should earn your vote. It is our hope that you will join us on this very first step, showing just how strong we all can be when we work together.”

The creator of the alleged slate, Jonathan Brazee, published a statement on File 770 expressing regret for his part in the controversy:

I worded the post that contained the 20Booksto50K Recommended Reading List…. the intention for the list was for visibility. I knew any indie title needed nominations from the membership at large to make the ballot. I wanted to have a diverse ballot with indie representation, but not to nominate or vote for something just because it was indie-written or by a member of the group. All I wanted was for the works on the list to be considered and judged on their own merits.

In addition, the list was there to excite other group members about the Nebulas and SFWA itself, to show that striving for quality might be recognized.

HOWEVER… I screwed up, and I take full responsibility for that. I am writing this both as an apology, because regardless of my intention, my actions have hurt people and organizations that I care about. But I also write this so that other people can understand the nuances of where my mistakes lay. There isn’t anything wrong with reading lists, but mine made mistakes…. Please don’t let my mistakes reflect badly on SFWA, the Nebula Awards, 20Booksto50k or on any of the other nominees.

His full statement is here: <file770.com/jonathan-brazee-sfwa-make-statements-on-nebula-awards-issues/>.