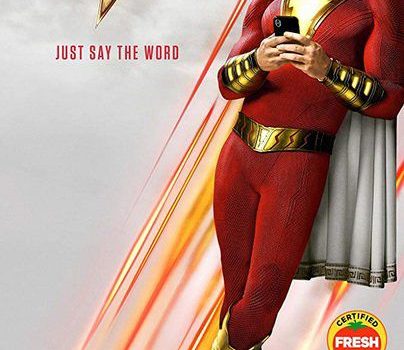 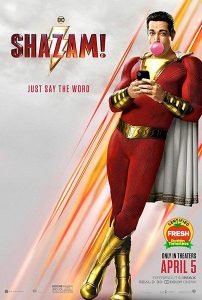 With a single magic word, troubled youth Billy Batson (Asher Angel) gains the ability to transform into a superhero adult (Zachary Levi) and back again. What follows is to be expected from teenage boys with new toys as Billy and his foster brother Freddy (Jack Dylan Grazer) test the limits of his comically enlarged body.

Josh: I laughed a lot at some of those scenes (I’d had a couple beers). Even when I could tell what the joke was going to be — like trying to leap a tall building in a single bound — it was still funny to see happen on screen. I thought the adult version of Billy did a good job of maintaining the kid actor’s mannerisms and speech patterns, as well.

Arley: It was a fun movie, pretty much what you would expect from seeing the previews. Old school superhero vibe, where superheroes are celebrated. The acting reminded me of the early-era Superman movies where it’s more smiley and the characters are caricatures.

Shazam! leans heavily on the humor and lighthearted energy, which is really needed in the DC universe, with good throwaway lines and visual gags. Even the direct tie-ins to the other movies are done with under-the-radar humor that boosts the movie’s appeal — one scene of him being shot in the face is an exaggerated version of Superman taking a bullet to the eye in 2006’s Superman Returns. There’s a running joke as the boys try to settle on a fitting superhero name: in the DC comics he’s called “Captain Marvel,” but lost the use of that name in a real-life lawsuit.

Trying to reconcile this comedic character with the grim and gritty members of the cinematic Justice League will be difficult, but the filmmakers make an attempt to bring a bit of darkness into the story.

Josh: I liked when the villain threw his brother out the window, or when one of the monsters bit a guy’s head off. Those parts kind of took me by surprise. It’s a YA movie but it’s a slightly darker YA. Something I would take my (12-year-old) nephew to.

Arley: Billy’s relationship with his mom was fucked up, but I liked that. Otherwise it was going to get too saccharine.

Josh: I saw it coming, but even still. That was harsh.

In a small departure from standard superhero movies, the villain’s origin story comes first, at the very opening of the show, setting up a legitimate motivation for his bad behavior. (Mark Strong does a capable job portraying the evil Dr. Sivana, even when his performance edges over into, “Look at me, I’m a supervillain in a superhero movie.”) Usually with comic book superhero films, the hero’s origin story comes first and the villain is a consequence of the hero’s presence in some way. In Shazam!, villain and hero arise from the same wellspring, both told that they are unworthy and unwanted, differing only in their outcome.

Josh: It’s definitely a movie with a message: circumstance doesn’t define if they become a good or bad person, it’s all about their fundamental character. The whole movie, though, is such a positive portrayal of foster care, which is great to see.

Arley: I enjoyed the theme of “found family,” and Billy’s foster family. There were moments where I was like, “I want to live there. I want to be part of that family.” Maybe that’s why this feels so old-school — it’s got a lot of clear-cut morality. You could feel there was a little bit of the family-TV vibe during the bullying scene, like, “We’re gonna learn a lesson!”

The bulk of the film follows fairly standard and predictable plot beats up until the boss fight, which goes on long enough to contain its own mini-arc.

Arley: The boss fight, for me, was too long. It kept having this repeated moment where Billy stands up and scowls at the bad guy, repeated like five or six times. That moment lost its power because it never followed through.

Josh: That was just a writer’s delaying tactic because they had so much material to get through. The boss fight was the only time where I was trying to guess what was going to happen next and kept getting it wrong.

The underlying silliness of the premise — a wizard is named after Solomon, Hercules, Atlas, Zeus, Achilles, and Mercury — is acknowledged: Billy barely suppresses his laughter when wizard-Shazam tells him how this whole deal works, and for some reason the myth-mixing extends to having to defeat the seven deadly sins. But this is only bothersome if one steps back and looks at it from any point of rationality. Obviously, kids won’t care.

The special effects were adequate, if a bit heavy on the CGI and green screen in places. Individual action moments obeyed the very specialized laws of comic book physics, which reinforced the feeling of watching a cartoon — while unrealistic, never quite pushing over into absurdity.

Arley: I never had the moment of, “This makes no sense,” or, “This is so obvious that they have to do this,” which is good. It clears the very low bar of previous superhero movies. Will you watch the sequel?

Arley: Still, it was a solid movie. I mean, it’s a comic book. You have to watch it just for fun.

Based on characters created by: Bill Parker & C.C. Beck 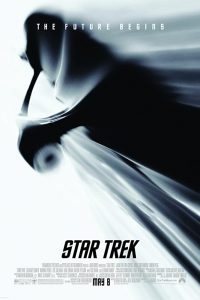 Thrusters on Full: A Review of Star Trek 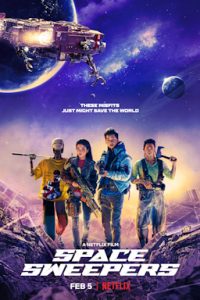 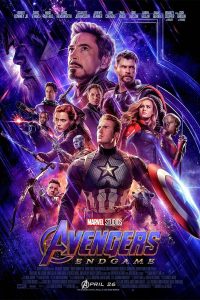