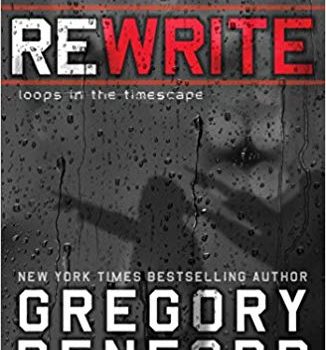 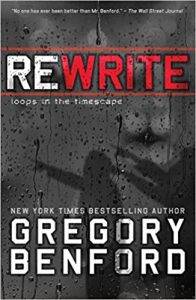 It’s been nearly four decades since Gregory Benford’s classic, multiple award-winning Timescape, which was lauded as much for its convincing portrayal of working scientists as for its ingenious notion of tachyonic cross-time communication. Benford describes Rewrite as a “conceptual sequel” to that novel, but for the most part the scientists in it are walk-on celeb­rities – including Einstein, Hugh Everett, and even Benford himself (very thinly disguised as his twin brother James) – rather than working drudges struggling for promotions and publica­tion, and maybe saving the world from ecological doom. That’s only one of many contrasts between the two novels. Timescape was as rigorous as Benford could make it in terms of the physics of communication with the past (the warning signals from 1998 had to be beamed toward the astronomical location of Earth in 1962, some­thing nearly all time travel tales conveniently overlook), but Rewrite opens with an event that might as well be magical: historian Charlie Mo­ment is killed in an auto accident in 2000 and wakes up in his own 16-year-old body back home in 1968. Timescape was a deeply character-driven work which pioneered a variety of liter­ary hard SF (later taken up by Paul McAuley, Alastair Reynolds, and others) and ended with a rather somber, bleak future in a dying timeline. Rewrite, on the other hand, may be the most playful novel Benford has written in years, one which asks, among other things, what Back to the Future might have been like if Robert A. Heinlein and Albert Einstein had been involved in its production.

There are plenty of other examples of such playfulness. In an afterword, Benford describes the plot as a deliberate puzzle in which the reader needs to untangle the various timelines that eventually get introduced, making the whole novel something of a game. And Benford makes it clear that he’s aware he’s working in a very specific tradition of time-loop tales, mentioning Jack Finney’s Time and Again, Ken Grimwood’s Replay (in which the protagonist also dies and wakes up in his teenage body in the 1960s), and even movies like Back to the Future and Peggy Sue Got Married. Back to the Future, in fact, turns out to be one of Charlie’s own productions, since he’s decided to take advantage of his knowl­edge of movies of the 1970s and 1980s to become a successful screenwriter and producer, largely by helping to create those very movies. Much of the first half of the novel reads like a Hollywood satire, more resonant of Nathanael West or the late Fitzgerald than of hard SF. For example, Charlie shrewdly bluffs Marlon Brando’s agent into signing him onto The Godfather with the threat of Steve McQueen taking the role instead. He’s also aware of the eventual commercial potential of Philip K. Dick, and persuades Dick to work with him on a script of The Man in the High Castle. Dick isn’t the only guest celebrity in this part of the novel, though; Spielberg shows up, as does (briefly) George Lucas. There’s more than a slight undertone of an old Playboy fantasy of making it in Hollywood, complete with a few too many and too disposable women characters throwing themselves at Charlie once he becomes a player. (In fact, the only substantial female character is Elspeth, a radical professor who is Charlie’s ex-wife in his original life and a rather unpleasant nemesis in his other lives.)

Then the novel effectively breaks in half. While climbing the Hollywood ladder, Charlie has also been trying to find a rational explanation for what’s happened to him, which leads him to Hugh Everett’s many-worlds interpretation of quantum mechanics and even to a meeting with Everett himself. Suspecting there may be others like himself, he hires a private eye, who suggests he read Timescape (leading to his meeting the author, “James Benford”) and who later leaves a cryptic phone message that eventually leads him to a mysterious address in Manhattan. Here he learns of a secret society of “reincarnates,” some of whom have lived for centuries, some of whom can even switch bodies, and some of whom are Robert and Ginny Heinlein, Albert Einstein, and Casanova, reimagined here as a rather louche sort of time lord. Now the tale takes on aspects of both stories like Poul Anderson’s Time Patrol series or Asimov’s The End of Eternity as well as Fortean notions of secret masters, as various factions compete to manipulate the timelines. This leads to some pretty satisfying adventure sequences involving mysterious assassins and Heinlein act­ing out his own competent-man scenarios, and to Charlie reconsidering the possibilities of his own role in this expanded universe. The result is a good deal of fun mixed with some more up-to-date speculations on quantum entanglement – the sense in which the novel is really a “conceptual sequel” to Timescape – as well as elements of the kinetic thrillers Benford has been experimenting with for some years now, but it’s not quite a return to the deeply character driven, almost meditative concern with the politics, philosophy, and impact of academic science of the original Timescape.