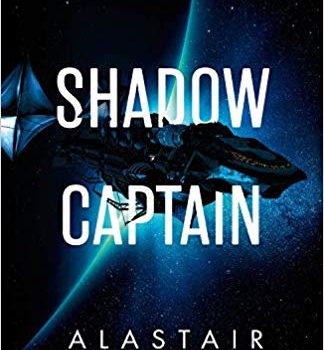 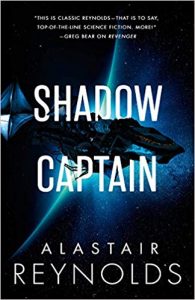 Alastair Reynolds’ Shadow Captain, the sequel to Revenger (2016) moves from the YA-ish space-operatic pirate adventure of the first book to something considerably less light-hearted – not that there weren’t indications in Revenger, starting with the title and extending to the villain, whose comprehensive cruelty was not ignored or minimized. But now the growing-up thematics are behind us, and the protagonists face fully adult issues.

Revenger began as the story of the Ness sis­ters, Arafura and Adrana, running away from home and joining the crew of a scavenging spacecraft, but it became the story of Arafura’s tracking and rescue of Adrana from the clutches of the pirate Bosa Sennen. Shadow Captain is Adrana’s story of the aftermath. With Bosa dis­posed of and her ship, the Nightjammer, in their possession and rechristened Revenger, they can’t just go home again. Nor are they so inclined. Both sisters have been toughened and even hardened by their exposure to the uncertain life on solar-sailing spacecraft and to Bosa Sennen. Adrana was in the process of being brainwashed into being the next iteration of the pirate captain (who was a hijacker of bodies and perverter of minds, a distinctly un­lovable version of the Dread Pirate Roberts), while Arafura became a relentless and sometimes ruthless pursuer. They are no longer a pair of respectable but wayward young women off on a dangerous escapade, but operators of a notorious pirate ship, leaders of its crew, and inheritors of its deadly reputation. That reputation means that while they would like to operate as scavengers and “honest privateers,” they are feared and hated fugitives, unless and until they can establish that they are not-Bosa-Sennen.

As admirably melodramatic as this situation is, its appeal is rivaled by the book’s setting: a solar system transformed by ten million years of rise-and-fall cycles of civilization (“Occupations”), all the planets dismantled and the raw materials used to build millions of habitats of every description (most now uninhabited) and countless “baubles,” worldlets filled with exotic and mysterious devices, the technological detritus of hardly understood Occupations. The Revenger needs supplies, and a visit to a bauble harboring a fuel cache shows how strange and dangerous these ancient worldlets can be. This one features hazards right out of a video game: a giant sphere that rolls through circular tunnels, squashing everything in its path, fol­lowed by an attack by spacesuited corpses, former “twinkle-heads” taken over and zombified by their “twinkly” neural implants.

Cut off from normal resupply and pursued by reward-seeking privateers, Revenger puts in at a dodgy habitat on the far fringes of civilization. Wheel Strizzardy is a space slum, a run-down warren of soggy mean streets inhabited by thugs and sad-sack dead-enders:

[There was] a sort of dreary bazaar or market, hemmed in by braziers and piles of rubbish. Only a few desultory merchants were doing any sort of business and there were even fewer customers…. There were spacesuit parts that were fit only for smelting, bits of old broken robot, smashed-up navigational devices, junk tools, and damp, threadbare garments. The merchants coughed behind veils of smoke and airborne grease…. There was a lot of picking up and examining things, a lot [of] shaking of heads.

So much for the romance of privateering along the spacelanes. This long central segment of the book is occupied by dealings with Strizzardy’s crime boss, Mister Glimmery, with Arafura’s secret project (a hunt for clues to the location of Bosa Sennen’s hoard of the strange currency called quoins), and with the growing tensions between the sisters over means and ends and exactly what kind of people they are going to be and what kind of ship Revenger is to become. While objectives are achieved, at the book’s end there remain mysteries unresolved: the nature of quoins, the role of vari­ous aliens in the human economy, the significance of the many blank spaces between Occupations.

Much of the fun of these books comes from the construction of a far, far-future space-opera setting in which limits and ignorance matter as much as magical-technological powers – where, in fact, more has been lost or forgotten than can ever be recovered. The mapping of Age of Sail tropes onto space travel is just the start. This ancient, imperfectly understood solar system has its desert island equivalents, its treasure troves, pirate (or at least shady) harbors, maps and clues, mysterious and exotic villains, and skulkers-in-the-shadows. There’s just a hint of the antic kitchen-sinkery of the Pirates of the Caribbean movies, as distinct from the meticulous wooden-ship-navy reconstruc­tions of, say, Patrick O’Brian. Nevertheless, at the center of this baroque masquerade party resides a sober consideration of what it might mean to go off adventuring, what it might cost to have to deal, even as an opponent, with the Dread Pirate Whoever. Beyond that comes the equally sobering vision of the deserts of vast futurity that surround islands of comfort and safety and sanity. 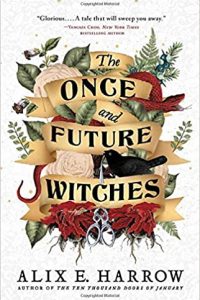