“Writing a novel is as if you are going off on a journey across a valley. The valley is full of mist, but you can see the top of a tree here and the top of another tree over there. And with any luck you can see the other side of the valley. But you cannot see down into the mist. Nevertheless, you head for the first tree.” — Terry Pratchett

I often use Pratchett’s quote to describe my writing process, though calling it a process might be putting a bit of a shine on it. When I’m on the edge of that fictional cliff, ready to plunge into story, those treetops are scenes that I’ve sketched in my head, that I’m looking forward to writing. I can even see the ending—way over there—so I know where I’m going. But there’s a lot I don’t know, such as how far it is to the other side, how long it will take to get there, who I’ll meet along the way, and how I’m going to get from tree to tree.

In short, I’m a pantser, a plunger—an author who works without a net. That presents serious problems for someone who writes series fantasy. In series fiction, the challenges of plunging are compounded. Wider, deeper valley, and more mist. More places to get lost and go astray without a map.

For me, writing a novel is a lot like reading a novel, except that I know how it all ends before I begin. It is what I discover along the way that drives me on.

I begin with a character who wants something. Then I put seemingly insurmountable obstacles in his way. After that, it’s like going to a party where the only person I know is the host, and I don’t know him/her very well. Anything can happen before the night is out, because this is fantasy, after all. I know some bad shit is going down, because that’s the only kind of party—er—the only kind of stories I write.

I stay in the room, participant, provocateur and wallflower, interacting with the characters. I slide under their skin, look out through their eyes, party (and bleed) along with them. Through that experience, I discover entanglements, agendas, alliances, grudges, and betrayals. Until the party is over and we see who goes home with whom, who left early, and who is left lying on the living room floor.

And then, the morning after, I try to make it look like I knew what was going to happen all along.

I admit, that seems like a pretty silly and inefficient method. Maybe it’s my lack of formal training, but it’s the only way I know how to write fiction. I suppose you could describe my process as organic—each event builds on the one before, so how do I know what lies ahead until I get there?

In every other arena, I’m a planner. I make reservations and I print out maps. To-do list? Check. Calendar with reminders? Check. Financial advisor? Double-check. I spent years writing nonfiction and scientific papers, with an outline, bibliography, and so on.

I would love to have the safety net and landmarks an outline could provide. I’ve tried doing all the pre-work, such as creating lists of what characters have in their pockets. But it doesn’t work for me. For one thing, I cheat. Pretty soon my outline consists of entries such as

C. Big battle or something

For another, that process of plotting and planning wrings the life and spontaneity out of the story. I know who’ll be mixing it up with whom, and what’s going to happen. There’s no reason to go forward. Except for, you know, having to give back the advance.

As you can tell, I am no evangelist for the Chima method. In fact, if anyone tries to tell you the one right way to write fiction, my advice is to run the other way.

So. Can a pantser like me successfully write series fiction?

It’s a little easier when each series installment is a stand-alone story, but set in the same world, with the same magical system. For instance, my Heir Chronicles young adult series is a story set in the magical world of Ohio. I wrote the first two books, then signed with an agent, who found me a publisher. The catch was that they would only commit to one book at a time. I had to revise The Warrior Heir to stand alone, in case it had to. Fortunately, it sold well enough to draw an offer for The Wizard Heir, another stand-alone. And then the third book, The Dragon Heir, landed on the New York Times list.

Well, then. Suddenly, my publisher was willing to entertain a multi-book deal that could accommodate a story too big to fit into one volume. I had just the project to pitch. Inspired by George R. R. Martin, I had been writing an adult epic fantasy set in a place called the Seven Realms. I had a map, a magical system, some characters, a history, and a five hundred thousand word head start. In fact, my agent had shopped that series prior to the sale of the Heir Chronicles, but it seemed that publishers found the prospect of taking on a five hundred thousand word unfinished project from a debut author rather daunting.

Now I had a track record. Since I’d found a warm welcome in young adult lit, I proposed a young adult fantasy series set in the Seven Realms. I wrote sixty sample pages, and my agent and I agreed to go forward.

But now that I wasn’t spitting out story in tidy little chunks, a new set of problems and unanswerable questions emerged.

How many books are you planning? my agent asked.

Plan? I had no idea. Trilogies were good, right? One story arc over three books. Surely I could get it done in three. “Three?” I said.

“How about a paragraph?” my agent said, a little desperately. “Can you give me a paragraph for each book?

I hesitated. “Do I have to stick with what I put in the paragraph?”

“No,” my agent said. “Once we have the money, do whatever you want.”

And so that’s what we did. Along the way, my trilogy turned into a quartet. The sixty pages ended up somewhere in book three. In the meantime, I was, of course, putting books out into the world. Books that could not be revised, short of putting sticky notes into each and every one of them.

There’s still a tension between my writing process and the kinds of stories I’ve chosen to write—where the story arc continues over several volumes. It’s not until I finish that last book that I know exactly how the puzzle fits together.

Sometimes it’s a struggle to wrap everything up in the final book of a series. I make huge messes, and it takes lots of space to clean them up. The Crimson Crown (the last novel  in the original Seven Realms series) was a doorstop of a book. My most recent novel, Deathcaster, (HarperTeen, March, 2019) is the fourth and final book in The Shattered Realms, another fantasy quartet set in the Seven Realms world. It came in at 790 pages before some reformatting saved some paper (no words were sacrificed.)

I work ahead as much as possible so that I can keep revising those earlier books until they go to press. I write in Scrivener, which makes it easy to create an outline and story-board as I go along. That way I can look at the work globally and identify and remedy structural issues and easily locate where revisions need to be made.

Still, there’s a price to be paid. When I look back, there are always threads I’d like to strengthen, foreshadowing to weave in, little clues and details and land mines that might be apparent to a sharp-eyed reader on a second read. I’m not talking about errors, exactly. Just the nagging notion that the entire work could be better, stronger, sharper, more tightly knit together. If I’d known then what I know now.

Then again, second-guessing is a malady common to all writers, pantsers and plotters alike. The self-editing process doesn’t stop when a book goes to print.

At this point, I’ve published thirteen fantasy novels in three different series with two different publishers. All three series have appeared on various bestseller lists. I can’t help but think I’m getting away with it somehow.

Cinda Williams Chima is the New York Times bestselling author of The Heir Chronicles, The Seven Realms, and the Shattered Realms young adult fantasy series. She nearly failed first grade because she was always daydreaming instead of listening. By junior high, she was in trouble for writing novels in class. Yet the magic of books took her from first grade failure to first generation college graduate to college professor to full time writer. In her latest book, Deathcaster (HarperTeen, 2019), she indulges her longtime obsession with pirates and dragons. Visit her at cindachima.com. 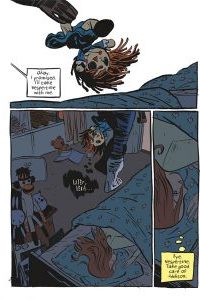