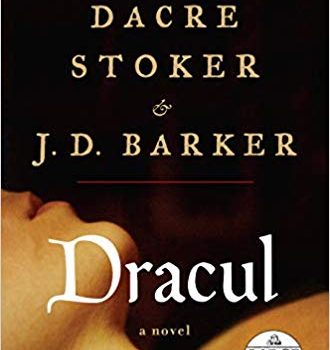 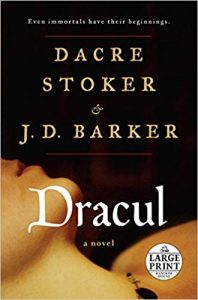 In his “Authors’ Note” appended to Dracul, a “prequel” to Dracula that he co-wrote with J.D. Barker, Dacre Stoker relates peculiarities about the publication of his great-grand-uncle Bram’s landmark vampire novel, some of which will surely be news to many readers, as they were to this reviewer. The manuscript of Dracula as we know the novel today (now in private hands) begins on page 102 of what Bram wrote. Accord­ing to Dacre, the text was excised at the behest of his publisher, ostensibly to mitigate some of the tale’s horrors for the benefit of a traumatized public still struggling to digest the very real horrors of the unsolved Whitechapel murders attributed to Jack the Ripper (which occurred in 1888, almost a decade before the publication of the novel in 1897, this reviewer notes with a raised eyebrow). Editorial deletions later in the manu­script apparently reference plot points in those missing 101 pages, enough to suggest the story as Bram originally had written it – including the incorporation of “Dracula’s Guest”, a fragment famously published as the stand-alone title story of Stoker’s posthumously published short-fiction collection Dracula’s Guest and Other Weird Stories (1914).

Dacre covered some of this bibliographic ter­rain last year in his contribution to Powers of Darkness (Makt Myrkranna), a translation of the Icelandic edition of Dracula from an appar­ent early draft of Stoker’s book that revealed a significantly different story line than the canoni­cal text of the novel that has come down to us. Bram himself had written an introduction to that edition in which he insisted on the truth of the story it told – a genuine expression of his belief in it, or more likely an authorly conceit put forth to sell more copies of his book to a credulous public. Dacre buys into the former speculation, writing, “Bram Stoker did not intend for Dracula to serve as fiction but as a warning of a very real evil.” Without stating it explicitly, Dacre coyly introduces his and Barker’s tale as a stab at what Stoker may have redacted – one possible surface in the hall of mirrors that is Dracula‘s publication history that might reflect the story as Bram Stoker wrote it originally.

This, however, requires that the reader accept that Stoker gave himself and his siblings star­ring roles in the tale and its narrative ramp-up to events in the version of Dracula that was finally published. Dracul (which, it’s worth pointing out, is a much longer novel than the missing 101 pages of Stoker’s manuscript would have translated to) is, in fact, a melodrama in which Bram, his older brother Thornley, and his younger sister Matilda are enmeshed in intrigues from childhood that make them pawns and participants in a war of wills between two vampiric beings. The novel toggles between two primary story lines: in one, a mature Bram Stoker is barricaded in a room, hefting a rifle whose likely uselessness against the uncanny aggressor menacing him from the other side of the door is suggested by the inef­fectiveness for any appreciable length of time of talismans and other superstitious defenses that he repeatedly deploys. The other story line is a composite chronicle of journal and diary entries from the Stoker siblings (most written by Bram while he is under siege in the other story line – a melodramatic touch of the sort used in those pulpy types of stories whose narrators commit their dying words to paper until they bleed out and… can… write… no… more…), meant to approximate the epistolary style of Stoker’s novel, covering the years 1854 to 1890 in relative chronological order. They begin with Bram, sickly for unexplained reasons at age seven (which is consistent with his true personal history), under the care of Ellen Crone, a beloved family nurse with a mysterious unspoken past and equally mysterious personal habits: every few weeks Ellen disappears, only to return a few days later looking rejuvenated and with her eye color altered (or so the siblings swear). One evening when Bram is on death’s doorstep, and the feeble ministrations of his doc­tor uncle prove useless, Ellen shoos everyone out of his sick-room and ministers to him in such a way that he soon recovers fully (and develops an instinctive – almost visceral – bond with her that anyone who has read Dracula or the glut of vampire fiction that followed it will understand). Shortly thereafter Bram and Matilda sneak into Ellen’s room, where they find her bed mysteri­ously filled with what appears to be soil, and then later follow her to nearby Clontarf Castle, where they witness events involving her that defy rational explanation. Soon after, Ellen disappears inexplicably from the Stoker household – but a sighting by the grown-up Matilda years later encourages the mature siblings to track her down and get to the bottom of her story.

The story that Ellen tells successfully merges the tale’s two converging story lines, past and present. Reviewer discretion prevents me from revealing too many of its particulars but suffice to say it makes sense of a clue planted early about a hideous murder of a family, apparently by their patriarch, that plays out during the Stoker sib­lings’ childhoods and raises suspicions concern­ing Ellen’s involvement. It also gives a blustery walk-on role to linguist Arminius Vámbéry, thought by some to be the inspiration for Bram’s vampire hunter Abraham Van Helsing, as well as other characters who figure prominently in Stoker’s novel as published. And it introduces a love element involving Ellen and a certain super­natural someone from her past – which makes this novel seem much more modern and problematic, in light of Dracula as it was published.

The power of Bram Stoker’s novel derives from its depiction of its vampire nemesis as an inhuman monster, a being who apes the behavior of mortals in order to manipulate them to do his bidding. Although Dracula talks in the novel of being capable of love, his relationship with heroine Mina Harker is indisputably perverse in the control it forces over her and the violation of Victorian womanhood that it was intended to represent. With rare exceptions, this depiction of the vampire as a malignant threat to humanity was the template for the fictional vampire until 1977, when Anne Rice’s Interview with the Vampire presented the undead as sympathetic outsiders and victims of circumstance. Stoker and Barker’s vampires and the love triangle that complicates their interactions with each other as well as Bram and his siblings are anachronisms in the context of the published version of Stoker’s novel. Ironi­cally, given Dacre’s claims that Bram’s novel, as originally written, was intended to warn of “a very real evil,” Dracul – if it is meant to restore the horror of evil – offers a softer and more com­passionate rendering of the vampire than the one set down in Dracula.