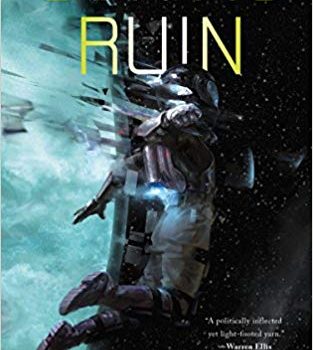 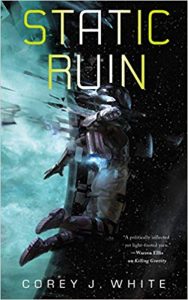 Corey J. White’s Static Ruin is the third – and for now final – volume in his Voidwitch Saga series of novellas. Static Ruin follows on from Void Black Shadow, and it’s much less of a hectic hot mess than that volume, and it serves up a decent helping of cathartic resolution – even though it’s still a little messy.

Mars Xi, voidwitch extraordinaire, living weapon, and genocidal mass-murderer, is a wanted woman. Although the forces on her trail have little chance of overcoming her superhuman powers, they’re the kind that keep throwing ships and personnel after her, and damn the butcher’s bill. Mars, meanwhile, just wants to be left alone – well, that and to find effective medical treat­ment for the boy Pale, a living weapon from a programme similar to the one that produced Mars. Pale suffers from dangerous seizures, as well as the psychological effects of having been treated as a tool, and Mars feels responsible for the kid. Her only allies are the untethered AI [name], who lives in her ship, and her pet artificial cat-bat creature Ocho.

Mars’s quest to find someone who can ad­equately treat Pale will lead her to a confronta­tion with her past. The only person she knows of who could help Pale is her father, Marius Teo, the scientist who sold her and her elder sister Sera to the programme that turned them into weapons, and set Mars on the path to becoming a mass-murderer. Mars wants to kill Marius a lot more than she wants to talk to him, but for Pale, she’s willing.

Unfortunately, Marius isn’t at his last known location. Instead, there’s a giant statue that looks like Mars and turns out to be her mother, and a community of people who revere Marius Teo as their founder while educating children with powers to be people instead of weapons. Turns out that Marius took a job with the Hurtt Corpora­tion (the name certainly sounds ominous enough) five years ago, and hasn’t been back since: Mars is going to have to go find him somewhere else.

What she learns about her mother in her brief time with the community of people who revere her father leaves Mars off-balance and no closer to an answer to the question that’s haunted her since childhood: why did her father sell her to an organisation that wanted nothing other than to make her into a weapon, and to make more weap­ons like her? But when she finally comes face to face with Marius, he’s a drooling shell of a man with a degenerative neural disorder, incapable of explaining himself in the way that she craves. And his employer, who’s been making sure Marius is comfortable, offers Mars a deal: in exchange for helping Pale and a sample of Mars’s DNA, he’ll fake Mars’s death so that she can escape and live an unmolested life.

But things have never been that easy for Mars. Betrayal and explosions follow.

Static Ruin leaps from explosion to explosion, action sequence to action sequence, with scarcely a pause for breath. It’s better at balancing its action with emotional impact and consequence than Void Black Shadow was: since Mars is essentially unbeatable in a fight as well as being very difficult to kill, the narrative tension lies in the emotional and interpersonal consequences. That doesn’t mean that Static Ruin succeeds in balancing these well, however: White’s Voidwitch Saga is big on the setpiece action, the physical sturm und drang, if you will, but it falls short of making a really significant impact in thematic and emotional terms.

But there’s some catharsis, some resolution for Mars’s story, and that’s more than Void Black Shadow gave me to expect. White shows prom­ise as a prose writer, and in terms of big SFnal ideas: I hope in his future work he’ll develop a more precise grasp on narrative tension than he evidences here. I confess, I enjoy me some fictional meaningless violence – but I do prefer a little more emotional impact. 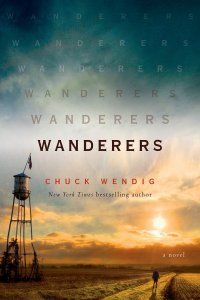