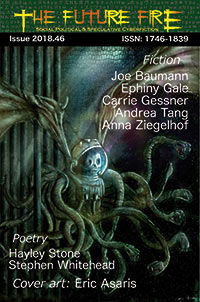 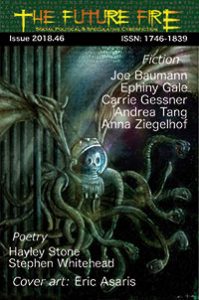 Slate’s Future Tense short story for August, “When We Were Patched” by Deji Bryce Olukotun, finishes their series looking at the future of sport. The narrator is a particularly officious AI, and never has a character had more rationale for having a stuffy tone: this AI is an augmented refereeing as­sistant for a particularly awesome kind of extreme tennis. Called FogoTennis, the game starts almost normally, although on an asymmetric court with various obstacles. However, as the game progresses the temperature in the court drops from 275 degrees Kelvin to 175 degrees Kelvin. The ball behaves much differently as it gets colder, requiring entirely dif­ferent skill sets. The AI is an advanced descendant of the Hawkeye system that assists high-level tennis referees call balls in or out, and it does not get along with its human referee partner during this particular high-stakes match. This is a story with a great character POV and a fantastically imaginative premise.

My favorite stories in October’s Lightspeed are fan­tasy. “Ten Deals with The Indigo Snake” by Mel Kessel features a world in which supernatural snakes are a common sight. They tempt you with deals, as the first snake tempted Eve. Although they are warned away from the snakes with PSAs at school, a woman makes her first deal with her snake, Dry­marchon, in high school. The consequences of that first deal magnify with all subsequent ones, leading to a life of ruin. Following the narrative pattern of substance abuse or other addictions, this is a nice fantastic twist on that genre, highlighting the main character’s psychology and struggles. Cameron Van Sant‘s story “Super-Luminous Spiral” also features supernatural temptation as a fantastic entity (“[h]is blue and green skin is speckled in spiral of twinkling lights”) joins the narrator’s creative writ­ing college class. Told in second person, sleeping with “galaxy boy” elicits a spurt of creative genius, but watching the muse move on to other lovers leaves you wrecked and obsessively writing broken relationship stories. Ultimately, the public health authorities become involved as dozens of young writers land in the hospital, unable to stop writing. This is a super queer tale of sex, art, and obsession.

The August issue of Apex Magazine is a special zodiac-themed double issue, guest edited by Sheree Renée Thomas. Thomas allows for the broadest possible thematic interpretations, as shown in Eden Royce‘s lead story “For Southern Girls When the Zodiac Ain’t Near Enough“. A woman goes to a psychic to learn about her future, but the cards the reader lays out are far from the traditional tarot deck, featuring instead Rice, Cast Iron, June Bug, Okra, etc. The descriptions of the cards and the echoes with the woman’s life are beautifully drawn. I particularly enjoyed the stories that leaned toward the science fictional end of the spectrum. “Jewel of the Vashwa” by Jordan Kurella features an alien society with divides between male/female genders but also between chitinous (hard) and soft-bodied people. As people pass between the largely segregated male and female societies to mate or go to war, we get one chitinous woman’s view of the same event, where both her lovers were killed, three times with three different slants, each followed by a backstory that explains another part of the context. It’s a nicely done structure for the story. The last story of the issue is “The Barnum Effect” by Celia Neri, in which a simple AI written solely for the purpose of automatically generating newspaper horoscopes appears to have drastically outstripped its programming… or at least so its creator believes, especially after her horoscope helps her escape a train bombing. The titular “effect” is that by which people read too much meaning into random events, and her colleagues try to argue that’s she’s misin­terpreting everything. While the author may have a thumb on the scales here, it’s an interesting aspect of judging AI to consider. Finally let me commend to you a series of poems by Mary Soon Lee in the issue that honor selected planets, and an essay by Kiini Ibura Salaam about her experiences with racialized sexism in the Dominican Republic as a student. A reprinted piece, but well worth reading.

The August issue of Future Fire features stories both epic and intimate. One that struck me as particularly charming is “Floaters” by Joe Baumann. Eschew­ing plot, it simply shows us how a gay merman, Fontaine, might make a life for himself serving drinks to college students and tourists floating down a river in Missouri. For those with a taste for the politics of kingdoms, there is “Requiem for Kingkillers and Queenmakers” by Andrea Tang, in which a woman who helped overthrow a tyrant must now help overthrow the replacement king that she handpicked. The relationship between her and her friend, the former tyrant’s daughter and current king’s wife, is fascinating. If the coup is implausibly clean, I appreciated the elegance of the plot and the denouement.