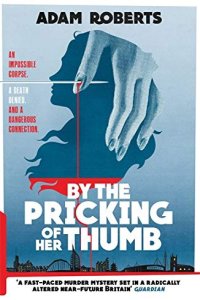 Like last year’s The Real-Town Murders, the sequel to Adam Robert’s near-future crime series, By the Pricking of Her Thumb, begins with an impossible murder. Where the previous novel featured a devilish and high-tech spin on the locked room mystery, this time the bewildering homicide involves a dead woman with a needle puncturing her thumb. Private Investigator Alma is once again called in by the police to uncover the killer and explain how a needle, with no sign of poison, could become a murder weapon.

In The Real-Town Murders, Roberts teased us with a future where the majority of the populace spend their time in the Shine – a virtual world limited only by the user’s imagination. I say teased because we’re never given access to the Shine, as our first-person protagonist, Alma, refuses to engage with the simulated environ­ment. Her partner, Marguerite, is permanently bedridden, deliberately infected with a virus that, every four hours, needs to be treated – otherwise she will die. This unceasing ticking clock means that Alma must stay present in the real world, close to Marguerite. As we discovered in the first book, she will force a plane to crash so that she can make it back home within the allotted time.

By the Pricking of Her Thumb is set 18 months later. Marguerite’s condition has become increasingly worse. Her body, under attack from this ever-mutating virus, is beginning to break un­der the strain. If that’s not awful enough, Alma has maxed out her credit and can no longer afford to maintain the machinery or purchase the variety of medicines that keep her lover alive. She lives with the fear that either the equipment will break down or that the drugs she does have won’t be suitable for whatever new pathology the virus throws at her. The pittance she will earn from solving this new impossible murder – assuming she solves it – is her only means of holding the creditors at bay for a few more weeks, and, more importantly, stock up on drugs. When she’s then contacted by Jupita, one of the four wealthiest people on the planet, and is asked to ascertain which of the “Fab Four” is only pretending to be alive (yes, you read that correctly), the opportunity of paying back her debt, of improving Marguerite’s treatment, makes the case – as strange and dangerous as it seems – far too tempting to turn down.

The Real-Town Murders was a genuine romp. An exciting who and howdunnit, coupled with ter­rific world-building, a female-centric perspective and a plot that hits the ground running. By the Pricking of Her Thumb is a much darker novel.

It’s still rompish – the highlight of the book is an extraordinary scene where Alma finds herself in the opening moments of Kubrick’s 2001: A Space Od­yssey, apes and monolith included – but solving the murder fades into the background as the novel’s true purpose becomes clear, a discussion on the nature of power, money, and greed. While investigating the “Fab Four,” Alma is told that they are all focussed on one goal: monetising the Shine, not an easy task given anyone can create their own Universe in this limitless world. Each of the four, though, have their theories on how this can be achieved, and whoever implements their plan first will not only control the Shine but all wealth creation. If Francis Fukuyama talked about the end of history, this would be the end of capitalism, its omega point. What makes this so dark, so bleak, is that we see all this through the eyes of a woman who can barely afford to feed herself, let alone pay for the life-saving treatments keeping her partner alive. Throughout the novel, Alma is surrounded by money, and yet it always remains out of reach. It’s a form of torture, summed up by this exchange with Lord Stirk, one of the “Fab Four,” who suggests Alma quit her association with Jupita:

“I need to get paid. Perhaps you could pay me?”

“You’ve not had a great deal of experience with very rich people, Alma,” said the Stirk. “If we made a habit of giving money away for no reason we wouldn’t be rich in the first place.”‘

I loved By the Pricking of Her Thumb. Roberts’s eclectic sense of humour – including the comic styl­ings of Reg and Ron, a hilarious but deadly double act – is on full display. Just like its predecessor, the novel is inventive and smart, with a suitably clever resolution to the impossible crime. If I finished the book angry and miserable, it’s because the discus­sion around money and power is as fascinating as it distressing, and because Roberts doesn’t check his punches: the last third of the novel is harrowing. I eagerly await the next book in the series. 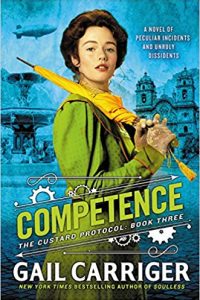