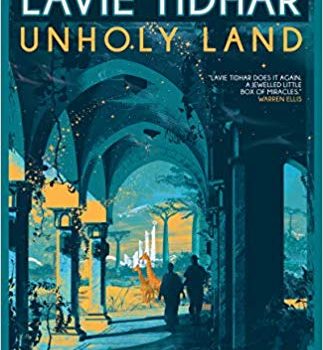 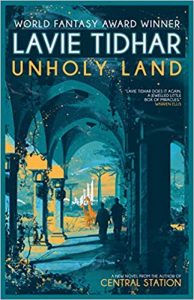 It may be the oldest Nimby game in the world. By now, we could assemble a small shelf of alternate histories concerning un­realized Jewish homelands in unlikely parts of the globe. Twenty years ago, Janet Berliner and George Guthridge won a Bram Stoker award for Children of the Dusk, the final volume of their Madagascar Manifesto trilogy, which had Euro­pean Jews displaced to Madagascar (an actual Nazi proposal), and Michael Chabon famously had them resettled in Sitka AK in The Yiddish Policemen’s Union. Then in 2016 came Simone Zelitch’s Judenstaat, in which the settlement was in Saxony, and the English translation of Navah Semel’s Isra Isle, based on the wacky plan of a real-life 19th-century American visionary to set up a homeland on an island he’d bought in the Niagara River in western New York (no one showed up). So when Lavie Tidhar, in Unholy Land, unearths an actual 1904 proposal to re­locate European Jews to a part of British East Africa (now Uganda), it shouldn’t come as that much of a surprise: it’s already part of a tradition. (This doesn’t even count Theodor Herzl’s own 1902 Altneuland, possibly the ur-text for such stories, although it located its peaceful Jewish state pretty close to home, in Palestine.)

Tidhar does mention Herzl’s utopian scheme in Unholy Land, and in fact Altneuland is one of several alternate histories he alludes to in a novel which, in what is becoming a familiar Tidhar strategy, increasingly plays with the interpenetration of different realities rather than simply offering a pair of alternate timelines. His protagonist is a pulp novelist named Lior Tirosh, who not only shares a familial resemblance to the elusive adventure writer Mike Longshott in the World Fantasy winner Osama or the Yiddish pulpster Shomer in A Man Lies Dreaming, but who often sounds like a version of Tidhar himself. At one point, he muses to a friend that he might write a book about “Adolf Hitler as a private detective or something,” and we’re told “he was most comfortable in his books, his little what if fantasies.” In one reality, we learn “he won a small award a few years back, for a weird political novel called Osama.”

As the novel opens, Tirosh is returning to his homeland of Palestina, the Jewish state carved out of Uganda in the early 20th century, where he soon learns that his niece Deborah, an anthropol­ogy graduate student researching artifacts of the original settlement, has gone missing. That sets up the central mystery plot-thread, but we soon meet two other viewpoint characters, a brutal “special investigator” named Bloom, who is following Tirosh for reasons that later become apparent (and whose own homeland is Altneu­land), and Nur Al-Hussaini, an historian (and SF scholar!) whose talent for shifting between reali­ties – sometimes even on a plane in mid-air – has gotten her recruited by the Border Agency, which monitors the various timelines. These parallel histories, she learns, meet at certain locations called crosshatches (interestingly, Tidhar uses the term almost exactly as John Clute uses it in The Encyclopedia of Fantasy, and later employs a similarly Clutean term, “thinning”). At first, these characters are distinguished by point of view – Tirosh in third person, Bloom in first-person, and Nur in second-person, but it gradu­ally becomes apparent that Bloom is managing the entire narrative.

Lest it appear that Unholy Land is entirely preoccupied with Dickian reality-juggling and hopscotching points of view, though, Tidhar hasn’t forgotten what he apparently views as his hardboiled ancestry. Not long after Tirosh arrives in Ararat, the capital city of Palestina, he witness­es a suicide bombing on a bus, and an old friend who meets him in his hotel room dies suddenly, the victim of a poisoned hotel minibar apparently intended for Tirosh. His search for his niece leads him to her thesis adviser at the university and later to a pub and a bookstore she may have frequented – but, in good private eye fashion, it also gets him knocked out and abducted. Between his own increasingly hazardous investigations, Bloom’s efforts to keep track of him, and Nur’s border-enforcement assignment, we get enough gunfights, mistaken identities, violent murders, and long-buried secrets to keep the pulp juices flowing. Does Tirosh ever find Deborah? Who among the major characters ends up in which of the various timelines, and why? Early in the novel, Bloom makes a comment that helps put in perspective not only Tidhar’s crosshatched tale, but perhaps all those other alternate Jew­ish homeland novels as well. “Imagine that you are one thing”, he says, “and, at the same time, something other entirely, both trying to coexist at once. That is the condition of being a Jew, I sometimes think – to always be one thing and another, to never quite fit. We are the grains of sand that irritate the oyster shell of the world.”

By extending Tidhar’s exploration of multiple and metafictional realities in even more sophis­ticated and assured ways than his earlier novels, Unholy Land is quite an irritated oyster. 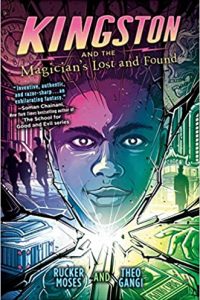