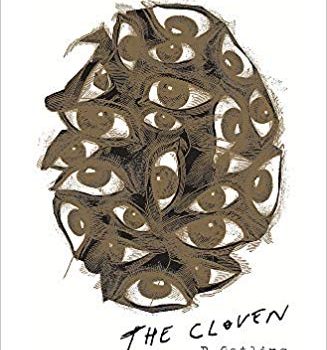 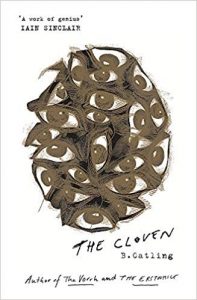 The problem with The Cloven, the third book in B. Catling’s intense fantasy trilogy, which began with The Vorrh and contin­ued with The Erstwhile, is the same problem that dogged the first two books: Catling is not very experienced, and it shows. These books, imaginative and daring as they are, make rookie mistakes, and for whatever reason, Catling’s editors have chosen not to fix them. The Cloven is, unfortunately, the weakest of the three books; it’s Return of the Jedi instead of Return of the King. For those who have remained spellbound by Catling’s vision, the third installment duti­fully answers some questions and wraps up some threads, but not all of them. If it fails to satisfy, that is only because it fails to succeed.

We pick up exactly where we left off at the close of The Erstwhile: the cyclops Ishmael has appar­ently been executed; the supernatural “piebald” girl Modesta and her caretaker start a journey to the Vorrh; the headstrong Ghertrude seeks her lost daughter, Rowena; the rich men of Essenwald plot to continue enslaving the Limboia to the timber trade; the peripatetic Hector Schumann shuffles around London meeting with psychiatrists and the Erstwhile held captive there; the assassin Sidrus finds himself in the clutches of the Sea People. (If you’re confused, welcome to the Vorrh trilogy. This book gestures toward standing on its own, but it can’t.) In the 400 pages that ensue, these plotlines move unevenly – some galloping, some barely inching forward at all.

Ishmael’s plot is probably the primary one, as his death was greatly exaggerated. He travels into the Vorrh, where he meets Modesta after her jour­ney, and they find a home together in the forest. Ghertrude regains Rowena, stubbornly ignores her own mysterious origins, falls in love with an unlikely person, and remains in Essenwald as it’s slowly consumed by the encroaching Vorrh. The Timber Guild does its best to reenlist the Limboia, using the same grotesque strategy as their predecessors (you don’t want to know, truly), but it all ends in bloodshed. Schumann reverse-ages under the protection of London’s Jewish cosa nostra, but otherwise not much happens to him. Sidrus becomes a hideous shell of a living creature, his body literally divided by a shaman between himself and the remains of the English­man Peter Williams. And Cyrena is retconned into involvement with the writer Eugène Marais, in a completely pointless side plot that ends without really resolving.

There’s also the matter of Christianity. With these books, Catling attempts to reconstruct the entire Adam and Eve/Garden of Eden creation myth using his own ideas, a fascinating ambition. All the cleanliness and golden light of Western art depicting Biblical ideas is stripped away, and in its place is blood and hair, knives and mud, obsession and appetite. Seeing the fluffy, comforting ideas of the entire Christian tradition turned dark, es­sentially reading a shadow Genesis, is heady and compelling. But it’s still not good.

The main strategy with which Catling has com­posed this book is paragraphs, running to many pages on end, of explanatory, expository prose, rather than using scenes and dialogue. The net effect of this strategy is reader exhaustion, and it offers a sense, even more pervasive than in The Erstwhile, of a book rushed into print rather than given time to marinate and develop. Granted, slowing the hasty paragraphs into scenes, thus perhaps splitting the story into even more books, even more pages than the 1,400 that already ex­ist, might have been an unwelcome challenge for Catling and potentially for his readers, but it likely would have made for better work. Plus, this book is even more violent and depraved than The Erstwhile, which was itself more violent and depraved than The Vorrh. There is a point where readers will not willingly follow where he leads, and I believe he has reached it in The Cloven.

Catling has flaunted the basic rules of real life and of most fantasy and SF from the first page of the first book, animating flesh against both logic and literary tradition, giving to objects and crea­tures properties that cannot be. For example, the Limboia could not exist in real life, nor are they zombies in the usual sense; they are something else, something Catling has invented. In the right hands, such idiopathic ideas can be intoxicating. In the first book, Catling was able to communicate this something-else quality to his readers, but his skill at such communication has degraded. The Cloven uses insects far more significantly than the other books, but their properties remain unclear. Cyrena’s plotline involves a “crown” designed by a fictionalized Sir William Gull, but although Catling describes episodes of semi-hypnosis Cyrena achieves with it, the reader cannot deter­mine these episodes’ meaning or purpose. Many of the trilogy’s conflicts are resolved simply by killing off characters, even major ones, and the violence of some of these deaths is truly stomach-churning.

There are additional practical problems with the book. The trilogy’s timeline is shaky, invok­ing the 1910s in historical figures and technology, and the late 1930s in world politics. (There’s no way that two decades pass between the begin­ning of The Vorrh and the beginning of The Cloven.) World War II insinuates itself into this third book threateningly, like a wound that ex­ists before it is made, when The Vorrh hardly dealt with European politics at all. The attitude of this series toward women and people of color is also insulting beyond all reason. And it is well past time to acknowledge that Catling’s entire project grows out of a kind of early 20th-century exoticism that should be unacceptable in the early 21st. The Africa Catling writes about existed in the minds of Raymond Roussel and Joseph Conrad, not in a genuine geographical location. In a year when living citizens of Africa (which is a continent composed of many countries and cultures, not a homogenous entity with a question mark drawn over it) are a mouse-click away on social media, a book that imagines a European city running on slave labor and an unknowable jungle pillaged by white greed, both plunked somewhere in the middle of Africa, ought to be seriously questioned.

If you are the kind of reader who can set these complaints aside, and read Catling’s trilogy as if it popped out of a time capsule, you might still want to take a pass on The Cloven. Catling’s imagination is genuinely unequaled, on par with Jules Verne’s, but his ability as a writer to sustain a project of this length and complexity has totally unraveled by the end of this book. Curiosity curdles to boredom, and you wind up, as Cyrena does one day, “trapped in a numb torpor. The kind that whispers: If you keep very still, then all things might slide back to the way they were before.” No such luck. Much as we might wish to, B. Catling can’t turn back the clock to Conrad’s Africa, and I cannot unread these books. 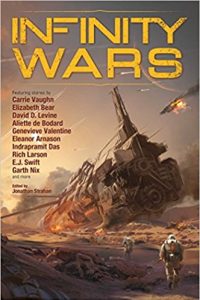 One thought on “Katharine Coldiron Reviews The Cloven by B. Catling”