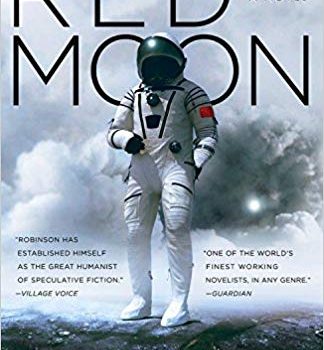 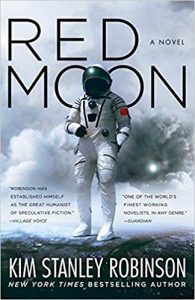 As far as I know, Kim Stanley Robinson hasn’t bothered to develop a consistent fu­ture history in the manner of Heinlein and others, and it’s just as well: why be constrained by a future concocted years or decades earlier, when everything that’s happened in the interim could alter that future radically? (Robinson recognized this when he updated the environmental science of his Science in the Capitol trilogy in 2015’s Green Earth.) It should seem obvious that each novel deserves its own shot, rather than being boxed in by earlier futures. Nevertheless, Robinson enjoys dropping links for loyal readers; some figures from his Mars trilogy show up as historical references in 2312, while a couple of characters from the Science in the Capitol trilogy show up in Antarctica – along with Chinese geomancer and broadcaster Ta Shu, who, in turn, now emerges as a key protagonist in Red Moon. A marked departure from the large-scale canvases of recent novels like New York 2140, Aurora, and 2312, Red Moon is a near-future geopolitical thriller set mostly in lunar colonies less than 30 years from now. This strikes me as wildly optimistic, given the massive infrastructure which he describes as already in place not only by the dominant Chinese, but by the US, Switzerland, the E.U., Russia, Brazil, South Africa, India, and Iran, all of whom have at least stations there. The title alludes, I suspect, not only to China’s dominant presence in the south polar regions (everyone else is clustered around the North Pole), but also to the optical effect that causes the moon to appear red during a lunar eclipse, as light is refracted through Earth’s atmosphere. That’s an apt metaphor for Robinson’s version of lunar politics, which is just as clearly refracted through the lens of growing economic and political chaos back on Earth.

We first meet Ta Shu as he is arriving on the Moon with an American technician, Fred Fredericks, whom he befriended en route. When Fredericks shakes hands with the governor of China’s Lunar Special Administrative Region, to whom he’s supposed to deliver a new quantum-entangled communications device, both he and the governor collapse, victims of an elaborate poisoning scheme. The governor dies, bringing Fredericks under suspicion as a possible assas­sin – after which he mysteriously disappears. Eventually smuggled back to Earth as part of Ta Shu’s production team, he meets a young pregnant woman, Chan Qi – described as a “princeling” for reasons that become apparent later – who’s also being pursued because of her leadership of a growing leftist resistance movement in China involving migrant workers and farmers. She helps Fredericks escape the captors awaiting them in Beijing, and much of the rest of the tale describes their increasingly perilous adventures as they try to solve the assassination mystery while evad­ing capture and, in Qi’s case, helping organize a massive demonstration in China that dwarfs the Tiananmen Square protests.

Apart from a couple of American intelligence agents who are among those pursuing the pair, Fredericks is the only non-Chinese character in the book, but he’s hardly the stalwart Western hero that this scenario might have suggested in an earlier era; in fact he’s a pretty clueless tech specialist, depending on Qi for most of the crucial decision-making during their flight. (He kept reminding me of a less competent Cary Grant in North by Northwest.) This seems a deliber­ate decision on the part of Robinson, who takes pains (and apparently quite a bit of research) to sidestep the appropriative issues that might arise by privileging a Western viewpoint. In fact, the main narrative voices are those of Ta Shu, whose first-person reports provide not only a good deal of exposition about the moon and its coloniza­tion, but meditations about such things as how feng shui might work in an airless, waterless environment (not a minor theme, since Robinson’s fiction is always acutely tuned to being-in-the-world); and an artificial intelligence charged with surveying the datasphere and reporting to an unnamed analyst about the movements of Qi and Fredericks. As with the AI in Robinson’s Aurora, this figure becomes an intriguing character in its own right, increasingly talking to itself as it tries use its almost limitless access to data in order to master something resembling consciousness (by the end, it’s invoking everyone from Thucydides to Chairman Mao in its effort to grasp the shifting political climate of China).

Between the AI and Ta Shu, we learn a good deal about the development, infrastructure, and politics of the moon colonies, but in general Robinson isn’t as interested in such details as, say, Ian McDonald in his Luna series or John Kessel in The Moon and the Other, though, like those novels, it exploits such dangers as solar storms and possible breaches, and features a harrowing journey across the barren surface. Even though only a fraction of the novel takes place on Earth, Earthbound politics drive much of the narrative, and in many ways the novel bears more resemblance to Antarctica or the Science in the Capitol series than to Robinson’s far more ambitious Mars series. His inhabited moon seems less a frontier than a refraction of ideological, social, and environmental anxieties that are with us now. Perhaps that’s one reason he chose to set it in such an improbably near-term future, which is nevertheless as convincingly textured and ob­servant as we’ve come to expect from one of the finest writers of his generation. 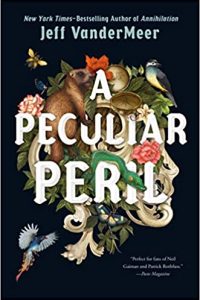 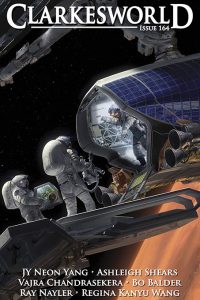