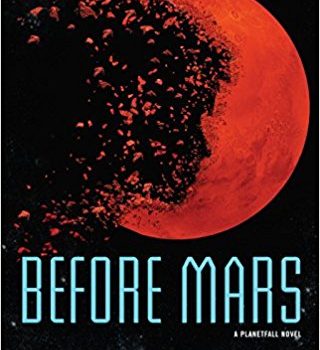 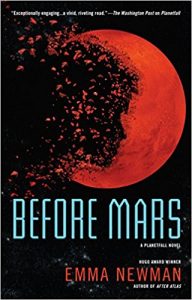 Emma Newman adds more perspectives to the universe she created in both Planetfall and After Atlas with Before Mars, which shares a timeline with After Atlas but is set on the red planet rather than in a future England. Rather than a straight-up who-done-it like After Atlas, Before Mars is a Memento-esque mystery.

Anna Kubrin is a geologist/painter who has endured a six-month solo trip to Mars, where she will paint and do research for the wealthy patron who owns the base. When she lands in a place she has never before been, she finds a note, written in her own hand, warning her not to trust the team’s psychologist. Our mystery starts to unfurl.

What works here is what worked in the previous Planetfall books. Newman has built an interest­ing world where countries no longer exist but government-corporations do. Those gov-corps keep an eye on their citizen-employees with implanted chips that track physical health (and, likely, other things). Those chips are better than any spy ring and it is fascinating to experience Newman noodling around with what that would mean.

Also, Newman’s style always leaves the reader a little off-kilter and a little removed from the action. It feels like there is always a thin layer of gauze around her characters – and it’s more a feature than a bug. The plot never quite goes where you expect it to, in ways both large and small. And while the last fifth of the book is a wild left turn, it still works somehow.

What doesn’t work as well is how Newman decides to tell us about her main character’s postpartum depression and failing marriage. It’s important, granted, to see a strong character who has experienced mental illness (as so many non-fictional women have (this reviewer included)), but Anna’s interior monologues read like therapy sessions themselves. Rather than spend pages hav­ing Anna tell us about how she feels about what happened after her daughter was born, Newman could have shown us, like she did by relieving a happy memory during the book’s opening pages. Those pages of backstory bog the story down.

Still, there’s more enjoyable and intriguing moments in Before Mars than not. Newman continues to develop the Planetfall universe in unexpected ways. 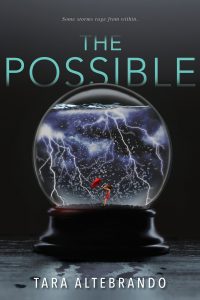