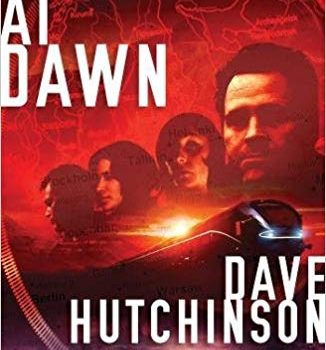 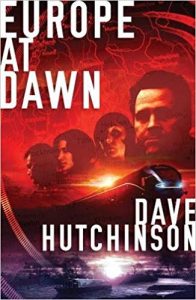 It may seem paradoxical, but it is the ordinari­ness that Dave Hutchinson evokes that makes his work so extraordinary. The normal run of things in science fiction is to emphasise how dif­ferent the invented world is from our normal daily experience. The world may be gritty or glitzy, utopian or dystopian, but it is decidedly not like what we are used to. Hutchinson’s approach is the opposite: he slowly builds up a sense of the day-to-day familiarity of what his characters are experiencing. We could step into his world and feel that here is life as we know it, here are run-of-the-mill people doing run-of-the-mill things that elicit our recognition and, often, our sympathy. Only a change in perspective, or a little nugget dropped late into the scene, tell us that things are not quite as we might expect them to be, but it is the carefully constructed sense of the ordinary that makes the extraordinariness of this fractured Europe so convincing.

Europe at Dawn opens quietly. An ordinary lower middle class couple have renovated an old narrow boat where they now live, using it to provide canal holidays. And if one trip takes them along an unfamiliar branch of the canal where the GPS doesn’t work, there can’t be anything really wrong about that, can there? Anyone who has ever been on the canals knows the scene, knows these people and the slow routine of their lives, so that the suggestion of a move out of the ordinary at the end barely seems extraordinary at all.

Then there’s Alice, a junior cultural attaché at the Scottish Embassy in Estonia. Newly-independent Scotland’s diplomatic service is still somewhat chaotic, her colleagues are unreliable, the rules are oppressive and subject to change, her job, in the main, is boring, and on top of all that she is trapped in a loveless marriage. Coupled with a seemingly intimate knowledge of the bars, restaurants, and apartment buildings of Tallinn, there is a sense that we could relocate to this Tal­linn right now and walk these same streets, find this same Scottish Embassy. Only when a couple of men turn up claiming to have the stolen skull of a Scottish saint do things start to slip out of Alice’s control. And it is her struggle to hold on to a sense of ordinariness, her disbelief in the face of the extraordinary, that makes all that follows believable and understandable.

And there is Benno, a teenage refugee from a country that no longer exists, swept ashore, liter­ally, on a Greek island that has been given over in its entirety to refugees from Africa and Asia. The poorer countries of Southern Europe take it in turns to reluctantly and chaotically provide food for the refugees penned up in makeshift homes made out of shipping containers, while the longed-for goal of Northern Europe remains locked behind its impenetrable wall of righteous indifference. This chapter is perhaps the best representation I have so far encountered in sci­ence fiction of the great humanitarian tragedy of our time, and the horrifyingly matter-of-fact solution that Hutchinson posits seems like a chillingly likely reading of the realpolitik of our times. One of the underlying pleasures of Hutchinson’s work (if “pleasure” is the right word) is that it pulses to an unfailingly convincing political beat; we can understand exactly how this fractured Europe grows from the contradictions of our present.

Brexit wasn’t even a thing when Hutchinson began the sequence with Europe in Autumn (2014), but he caught precisely the mixture of selfish­ness, greed, paranoia and ignorance that contributed to this first fracturing of the European project. The early chapters of this new book read like a companion to that first volume rather than an expansion of the story, an impression reinforced when Rudi, the chef, recruited by the Coureurs des Bois who links the four books, makes his first appearance. This is a younger Rudi than in the more recent volumes, still predominantly a chef setting off on occasional freelance missions as a coureur. Here he embarks on a somewhat farcical mission to Barcelona where the stolen skull of a Scottish saint is ap­parently being offered for sale. What links this mission and the cause of Alice’s misfortunes will not become apparent for a couple of hundred pages and many years, because the novel now shifts for­ward to a time when Rudi, walking with a stick, as he was in Europe in Winter (2016), is retired from the Coureurs des Bois and running the restaurant in Krakow that he inherited, while Alice has escaped to a hermit-like existence in rural Finland where she makes a fragile living as an artist.

In the second volume, Europe at Midnight (2015), Hutchinson expanded his story, and set up a contrast to the disintegration of contemporary Europe, by introducing the Community. This is a continent-wide nation accessed in a parallel reality which was opened up in the 18th century by eccentric English map-makers, the Whitton-Whytes (introduced by Hutchinson in his 2004 story, “On the Windsor Branch”). The unity of this continent-wide state has led to a society that is dull, conservative, repressive, and technologi­cally far behind the Europe of our world. It is also vicious and ruthless, responsible for the Xian flu whose devastating impact began the fracturing of Europe, and destroying its own pocket universe, the University, where nuclear weapons were being developed. The third volume, Europe in Winter, posits an uneasy peace between Europe and the Community, but there is little trust on either side. Terrorist atrocities unsettle the balance of power, but when Heathrow Airport is translated whole­sale from Europe into the Community, it becomes apparent that there is another, hitherto unknown player in this power game.

Europe at Dawn skates lightly across these intervening revelations, following the secret agent who calls himself Rupert of Henzau as he exacts revenge on the Community politician he has determined is responsible for the destruction of the University. Then we shift focus to the small unit of British troops who happened to be in Heathrow when it was translated to the Com­munity, and who are struggling to maintain order in the face of the impossible, until someone starts blowing up planes.

The Coureurs des Bois began as a vaguely il­licit courier service, finding ways to move goods, information, and sometimes people across the excess of borders in the new Europe. As such, they play a role very much like the secret service, and Hutchinson has a lot of fun with John Le Carré references. They are also, almost by default, the only transnational body with any authority in Europe, since the multiplying security agencies of the multiplying statelets have increasingly parochial concerns, so it falls to Rudi, summoned out of retirement like George Smiley in Tinker, Tailor, Soldier, Spy, together with Rupert and Alice, to trace the source of the new threat to the stability of Europe and Community alike. Since Hutchinson has negotiated his way through all four of these richly complex novels without put­ting a foot wrong, it goes without saying that this final revelation is both inevitable and surprising.

Hutchinson writes with wit and humanity and remarkable political nous. We sympathise with the characters because it is easy to see ourselves in them, struggling to live an ordinary life in circumstances that are never quite as ordinary as we might like them to be. His portrait of a Europe where every streetcorner or scrap of wilderness sees independence as the solution to any petty dispute is made convincing by a ready humour (an Olympic opening ceremony that goes on for days) and an underlying sense of tragedy (most of these statelets have no option but failure). And yet how these various cities and societies work is revealed in telling details, acute observation, and a sense that this is how politics today actu­ally does work. This fractured Europe makes for high-octane thrills, mind-twisting concepts, smart and engaging storytelling; yet under it all is a sense that Dave Hutchinson reads the world more sharply than any of us, and this is indeed what tomorrow could look like.